“We loved our church and we wanted to make sure that when we came to General Conference
we would have enough money saved by making these transactions, so when we came here the bills would be paid,” said Bishop George Edward Battle Jr., outgoing senior bishop of the historic Black denomination, on Wednesday (July 28).

The written report of the church’s Connectional Budget Department noted that the denomination had refinanced a loan totaling $3.9 million that was to be paid off via quarterly payments from 2015 through 2022.

The Rev. George McKain, spokesman for the denomination, said the payments were for Zion Renaissance, a corporate activity center, and surrounding property at the AME Zion Church’s headquarters in Charlotte, North Carolina.

In addition, Battle said other debts owed by institutions within the denomination — which dates to 1796 — had been paid.

“Livingstone College, Hood seminary, and Clinton College — debts have all been satisfied,” he declared of the denomination’s higher education institutions in North and South Carolina.

The opening worship service ended with a mortgage-burning ceremony, with Welch ripping pieces of paper in half and Battle overseeing them burn inside a silver bucket. 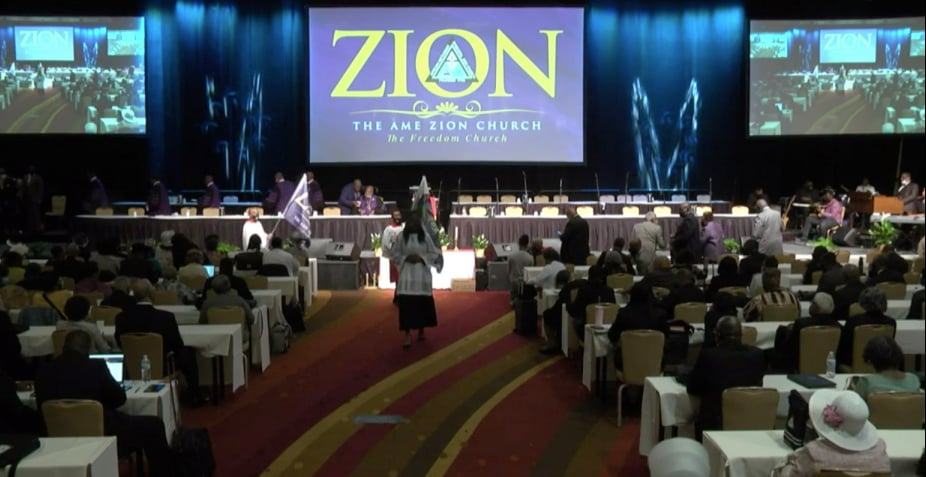 “People of God, our prayers have been heard and accepted,” said Bishop W. Darin Moore, of the church’s Mid-Atlantic District, reading a liturgy that included a congregational response on screens viewed in Atlanta and across the globe. “We are blessed, and we are debt free!”

The worship service also featured Scripture readings from bishops participating online from Africa and choir members leading worship from an Atlanta stage and via video from South Carolina.

The meeting, usually held every four years, was postponed last year due to the COVID-19 pandemic. In a written quadrennial address released ahead of the meeting, AME Zion bishops expressed concern about violence and the racial climate in the United States and the need for new church growth efforts within their denomination.

“Those persons who are not of color, cannot imagine the current anguish and suffering of so many black and brown families repeatedly watching their children lying in streets slaughtered at the hands of murderous mobs clothed in police garb, talking about ‘thugs,’” they wrote. 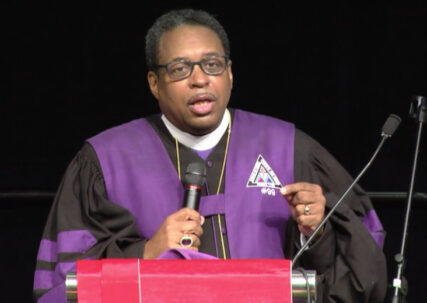 “Not even the infamous (1960s-era police commissioner) Bull Connor of Birmingham, Alabama was seen soiling his hands and knees on someone’s neck. Indeed, there can be no salvation for any of us if we fail to recognize and change the pervasive, persistent, pernicious infiltration of tolerance for racial violence among this nation’s institutions, churches included.”

The bishops recommended their churches make greater use of technology, in light of the pandemic, to reach more people and encouraged each of its annual conferences to develop strategic growth plans for a two-decade period.

“The number of congregations in our church is declining,” they wrote. “There is tremendous growth in our denomination and new congregations are being birthed, but these births are mainly in our mission conferences in Africa, and not in the United States.”

The bishops, describing their duties that began in 2016, said they were charged with oversight of 1,979 overseas congregations and 1,457 domestic churches.