(RNS) — A groundbreaking study of the experiences of more than 1,100 American Jews of color finds many feel a strong sense of belonging to the larger white Jewish establishment but 80% said they have also suffered discrimination or racism in Jewish settings.

The study, the first of its kind, was undertaken by 16 scholars, many at Stanford University, on behalf of the Jews of Color Initiative, an organization dedicated to supporting Jews of color. It included an online survey of 1,118 self-identified Jews of color from across the country, 61 of whom were later invited for in-depth interviews. It is not a representative sample but a self-selected one.

The study was intended to foreground the racial diversity of American Jews, a group long assumed to be overwhelmingly white, and to give voice to the experiences of Jews of other races.

It found that Jews of color are committed to their faith and engage in all the traditional ways white Jews do. They love Jewish ritual, celebrating Jewish holidays and attending synagogue; 75% said working for justice and equality was “very important” for them. At the same time, they also expressed frustration at having to defend and explain their Jewishness and the pain of encountering racism in Jewish contexts.

Participants in the study said they had been repeatedly mistaken for security guards or nannies and presumed to be the non-Jewish partner or guest of a white Jewish person.

Seventy-four percent of respondents said they felt burdened with explaining their identity and 66% said they’d been asked questions about their race or ethnicity that made them feel uncomfortable. 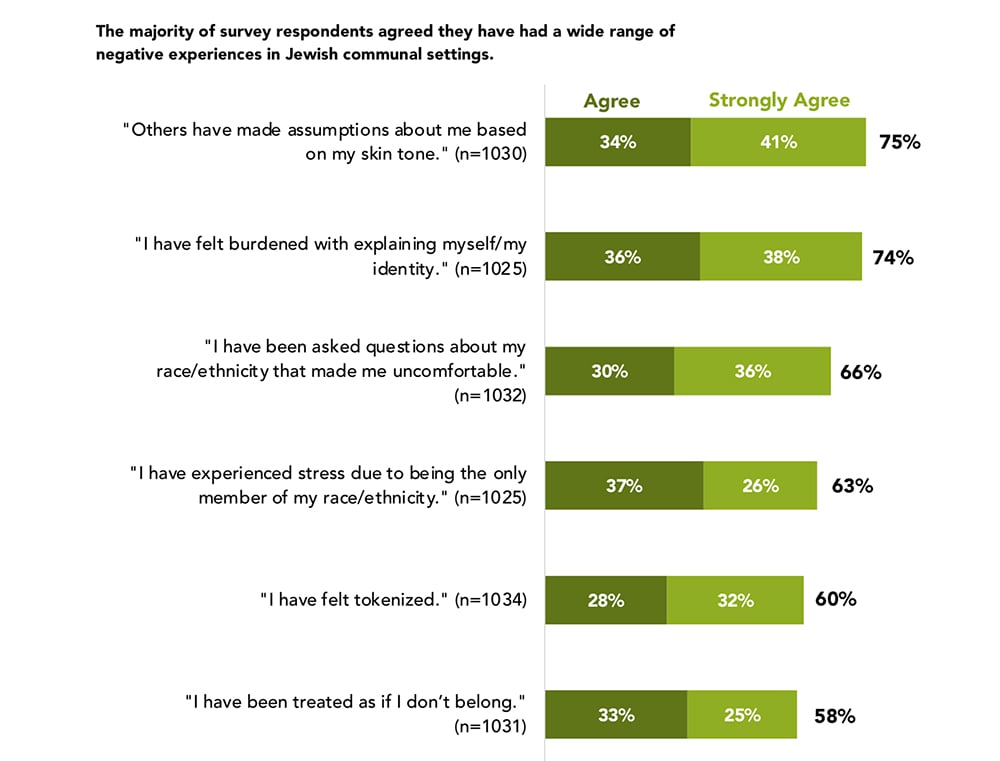 “The majority of survey respondents agreed they have had a wide range of negative experiences in Jewish communal settings.” Graphic courtesy of Jews of Color Initiative

“There’s no protective membrane that protects Jews of color from racism,” said Ilana Kaufman, executive director of the Jews of Color Initiative. “The racism that affects the larger U.S. community affects the Jewish community as well. But even in an environment of racism they feel they belong. That’s really important.”

The study was born out of a previous demographic report that suggested American Jews are far less white than before.

Many criticized the report as flawed and some Jewish institutions said it overestimated the number of nonwhite Jews.

But a 2020 Pew Research study corroborated its findings among the youngest Jews. The Pew study found that among Jews aged 18 to 29, 15% identify as Hispanic, Black, Asian, multiracial or some other race or ethnicity, compared with just 3% among Jews aged 65 and older.

The new study aims to give voice to those Jews of color and document their experiences.

Respondents were 21% Black, 11% Hispanic, 10% Asian; 7% Middle Eastern or North African; 45% said they were biracial or had three racial identities. They live in 47 states (there were no respondents from Mississippi, North Dakota and Wyoming).

The presence of racism in Jewish communal institutions is one of the report’s major findings. Two-thirds of respondents (65%) said American Jewish leaders were “poorly” (41%) or “very poorly” (24%) addressing racism in American Jewish settings. “Respondents do not feel that American Jewish leaders are adequately addressing racism and white supremacy within the American Jewish community.” Graphic courtesy of Jews of Color Initiative

“We largely lean politically liberal and have progressive political values and we often think we have less work to do than we actually do,” said Ginna Green, a board member of the Jews of Color Initiative and a strategic consultant for social justice nonprofits. ”For white Jews it means maybe there’s more to learn. This report gives us a road map to learning more about who we are and what matters to all of us.”

The report recommends Jewish institutions strive for greater racial equity in hiring and recruitment, a process many religious groups have already begun. It also recommends encouraging racial justice conversations guided by the experiences and needs of Jews of color.

Many Jews of color expressed solidarity with Palestinians living in Israel or the occupied territories and said they do not feel comfortable sharing those views in largely white Jewish settings because others might perceive them as not “good Jews” or not “Jewish enough.”

A Black and mixed race woman in her 30s is quoted in the report expressing feelings of being doubly marginalized when it comes to views of Israel:

“When Black Lives Matter put out their policy platform, it said something about Palestine, and the Jews flipped out. Black people were all of a sudden fighting with Jews. And nobody thought to say, ‘Hey, Black Jews. What do y’all think? Can y’all help us?’”

The study was premiered with a Zoom event Thursday (Aug. 12) attended by more than 350 American Jews, 23% of whom identified as Jews of color.

How the report will be viewed by white Jews remains to be seen. But Marc Dollinger, a history professor at San Francisco State University who is white and studies Jews and race, said the report provides a valuable and much-needed historical corrective.