WASHINGTON (RNS) — As most Americans absorbed the shock of the Taliban’s full takeover of Afghanistan over the weekend, officials at Lutheran Immigration and Refugee Service followed the rapidly deteriorating situation with resignation, knowing it could have gone differently.

In May, leaders at LIRS, one of several faith-based agencies contracted with the U.S. government to resettle refugees in the United States, sent a letter to the Biden administration requesting it remove Afghan civilians (and their families) who have worked with the U.S. before its planned troop withdrawal.

Anyone familiar with the “bureaucratic maze” that is the country’s Special Immigrant Visa process knew the State Department visa office wouldn’t be agile enough to respond to the urgent need for evacuations, said Krish O’Mara Vignarajah, president and CEO of LIRS.

“We’ve been screaming from the rooftops for months now that we need to get these allies to Guam or another U.S. territory,” Vignarajah said.

The White House did not immediately respond to requests for comment from Religion News Service.

LIRS is just one of the faith-based agencies that have been calling for the evacuation of Afghan allies as a moral imperative and are working now to help bring those people to the U.S. amid the takeover of the country by the Taliban, the militant group that previously ran Afghanistan under a harsh interpretation of Islamic law.

“We feel strongly that these Afghan allies fought side by side with us for 20 years, and surely we can leave side by side,” Vignarajah said.

The U.S. began evacuating Afghans in the final stages of the SIV process about a month ago before canceling additional flights out of Kabul because of security concerns, according to Jenny Yang, senior vice president of advocacy and policy at World Relief, another one of the faith-based organizations that partners with the U.S. government on refugee resettlement.

In June, most of those organizations — including LIRS, World Relief, Church World Service, the Episcopal Church (which resettles refugees through Episcopal Migration Ministries) and HIAS (founded as the Hebrew Immigrant Aid Society) — urged President Joe Biden to implement plans to evacuate Afghan translators, soldiers, cultural advisers, embassy clerks and others who have worked with American armed forces, media or nonprofits and allies and to authorize as many SIVs as necessary to make that possible.

But as the Taliban invaded the presidential palace in Kabul this weekend, two decades after it was ousted from the Afghan capital by the U.S. military, many who remain in the country fear they will be targeted by the Taliban if it is discovered that they aided the U.S.

It’s not only “devastating” to witness, Yang said, but also “disappointing to see how many people are left in a very vulnerable state because of the quick control of Afghanistan by the Taliban and the limited capacities we have as a government to be able to evacuate our allies.”

She said about 18,000 Afghans are still in the middle of the SIV process.

About 2,000 Afghans eligible for such visas and their families so far have been evacuated through the U.S. Operation Allies Rescue, Biden said Monday afternoon (Aug. 16). 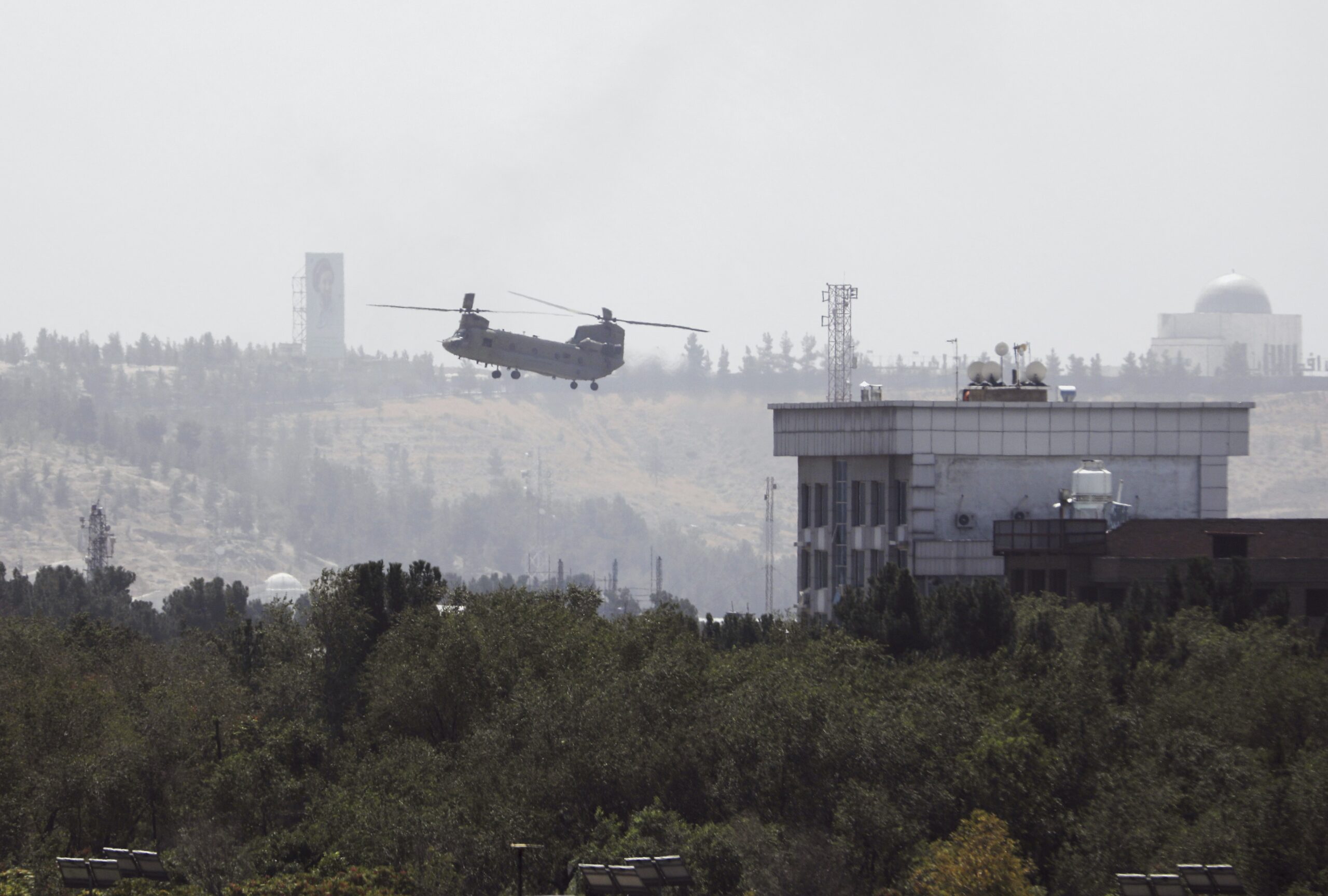 U.S. personnel were evacuated from the U.S. embassy in Kabul, the Afghan capital, as Taliban insurgents broke through the city’s defensive line, Aug. 15, 2021. (AP Photo/Rahmat Gul)

In his address to the nation, the president said he was aware of concerns that the U.S. did not begin evacuating Afghan civilians sooner.

“Part of the answer is some of the Afghans did not want to leave early, still hopeful for their country. And part of it is because the Afghan government and its supporters discouraged us from organizing a mass exodus to avoid triggering, as they said, a crisis of confidence,” he said.

In an email to RNS afterward, Vignarajah of LIRS called the claim that Afghans did not want to leave the country “misleading at best.”

“We have been in touch with countless SIV recipients who have been desperate to leave Afghanistan for months and have not been able to due to insufficient financial resources and inadequate flight accessibility through international organizations,” she said.

“He is blaming the victim,” Hetfield told RNS via text message on Monday. “Most SIVs couldn’t get through the 14 step, years-long bureaucratic obstacle course for SIVs. The process looks like it was designed to keep people out of the United States, not rescue them. And the (United States government) had lots of time to put systems in place to facilitate refugee resettlement without sparking an exodus. They didn’t make the effort and that is inexcusable.”

In a separate interview, Hetfield said he was “sickened” by the situation in Kabul and suggested there was plenty of blame to go around.

“This should have been planned for 20 years ago,” he said. “It was three successive administrations — and then a fourth — that failed to put a plan in place to rescue people who are vulnerable because of their associations with allied forces. That to me is sickening and heartbreaking.”

Even so, the HIAS president noted he does not think the Biden administration should have “rushed forward” with a troop withdrawal without first developing a robust refugee evacuation plan. In addition, he argued that even as the White House took actions to aid Afghan refugees in recent weeks, their efforts were plagued with obstacles.

State Department officials announced in early August that the agency would broaden Afghan access to the U.S. beyond the restrictions of the SIV program, he said, creating a “priority 2” or “P2” designation that could — at least on paper — include thousands of Afghans who worked for U.S.-funded projects, non governmental groups and U.S.-based media outlets. But the program does not offer evacuation flights: In order to access it, applicants must leave Afghanistan on their own before applying for U.S. refugee status, a process that can take at least 12 to 14 months.

Hetfield said getting out of Afghanistan was already challenging two weeks ago, and even if refugees made it out, they could land in Iran — a nation that has taken many Afghan refugees over the years but where the U.S. does not have any capacity to process visa claims.

“It was impractical when it was introduced — impractical is a kind word for it — and now it’s impossible,” he said.

Erol Kekic, senior vice president of Church World Service’s immigration and refugee program, agreed. He equated the program to “telling somebody that there’s another way out, but it’s going to take forever for you to get there.”

Kekic added that it’s important to keep the P2 program in place but that it amounts to few “realistic opportunities” for those seeking passage out of Afghanistan and into the U.S.

Challenges remain for faith communities willing to help, too: Some Church World Service sites have been “overwhelmed” by SIVs who have arrived all at once, partly because the U.S. refugee resettlement apparatus was decimated under the previous Trump administration, he said.

Still, support for the refugees among those communities is robust, according to Kekic.

Bill Canny, executive director of the U.S. Conference of Catholic Bishops’ office of Migration and Refugee Service, said his group has already helped resettle some 1,000 Afghans with SIVs in the U.S. this year.

In addition, representatives from his group, LIRS, CWS and others have spent the past few weeks helping Afghan refugees at Fort Lee in Virginia, lending legal aid and medical assistance. World Relief has been ramping up its efforts to welcome arriving Afghans at its offices in Sacramento, Seattle and elsewhere.

And Bethany Christian Services, which resettles refugees across the country in partnership with a number of faith-based agencies, said in a written statement it is “ready and able” to welcome more Afghan refugees and SIV recipients.

Meanwhile, planes abruptly stopped arriving at Fort Lee over the weekend, and while some of the visa processing work has shifted to Kabul, refugee groups say they’re unsure when flights to Fort Lee will resume.

Biden has said the U.S. mission now is to get its people and its allies out of Afghanistan as quickly and safely as possible, concluding the country’s military withdrawal and its longest war.

But, Canny said, “It’s not clear who is going to be able to come out — with what status, if you will — given the embassy is closed. We’re still on call at Fort Lee to stand by for, hopefully, further flights.”