VATICAN CITY (RNS) — Alì Ehsani, 32, knows what life can be like for Christians under the Taliban regime. Born in Kabul in 1989, he and his brother fled when he was 8 after the murder of his parents by the Islamic extremists.

“I know firsthand how difficult it is to be Christians in that country,” Ehsani told Religion News Service on Monday (Aug. 16). “I lived through the horror, the terror of these Taliban.”

Ehsani made it to Rome in 2003 after a five-year journey that he detailed in two books, “Tonight We Watch the Stars” and “The Kids Have Big Dreams.” In 2015, he earned a law degree from a university in Rome.

Since then he has been committed to helping fellow Christians in Afghanistan, including a Catholic family facing persecution after the Taliban regained control of the country in mid-August. The urgency has risen a hundredfold since the U.S. withdrawal in recent weeks ceded the country to the Taliban.

While Afghanistan’s new rulers have promised not to shed any blood, some locals fear that the Islamist regime will lead to persecutions and violence, setting the clock back 20 years in terms of freedom and democracy.

Ehsani came into contact with the Christian family in Afghanistan through an Afghan who was also studying in Rome. The two had been friends for some time when Ehsani made the sign of the cross before a meal, and they learned that they shared the Christian faith.

Afghan citizens are not legally allowed to convert to Christianity and there is little data on the number of Christians living in the country. According to the U.S. International Religious Freedom Report, published in 2009, there are between 1,000 and 8,000 Christians secretly practicing their faith in the country. There is only one officially recognized Christian church in Afghanistan, the Catholic chapel inside the Italian Embassy.

Thanks to his friend, Ehsani began communicating via WhatsApp with the Christian family in Afghanistan six months ago, as concerns about the fate of the country began to grow. The family wishes to remain anonymous to avoid being found.

At first, the family was guarded, Ehsani explained, but about three months ago they cautiously revealed that they looked to Pope Francis for spiritual guidance. That’s when Ehsani understood that they are Catholics.

Since they were not able to attend Mass in Afghanistan, Ehsani began to livestream the services in Rome for them to watch from Kabul. “Their neighbors discovered them one day,” Ehsani told Religion News Service over the phone Monday (Aug. 16), “so they ratted them out two weeks ago.”

The family told Ehsani that “the Taliban are going door to door” asking whether any Christians live there or in that community. Ehsani hasn’t been able to sleep since he heard the news. “I’m always praying for them,” he said.

He is trying to help the family through humanitarian avenues, hoping they can be included in the Italian government’s efforts to evacuate Italian nationals and local allies, amid a global push to welcome Afghan refugees. 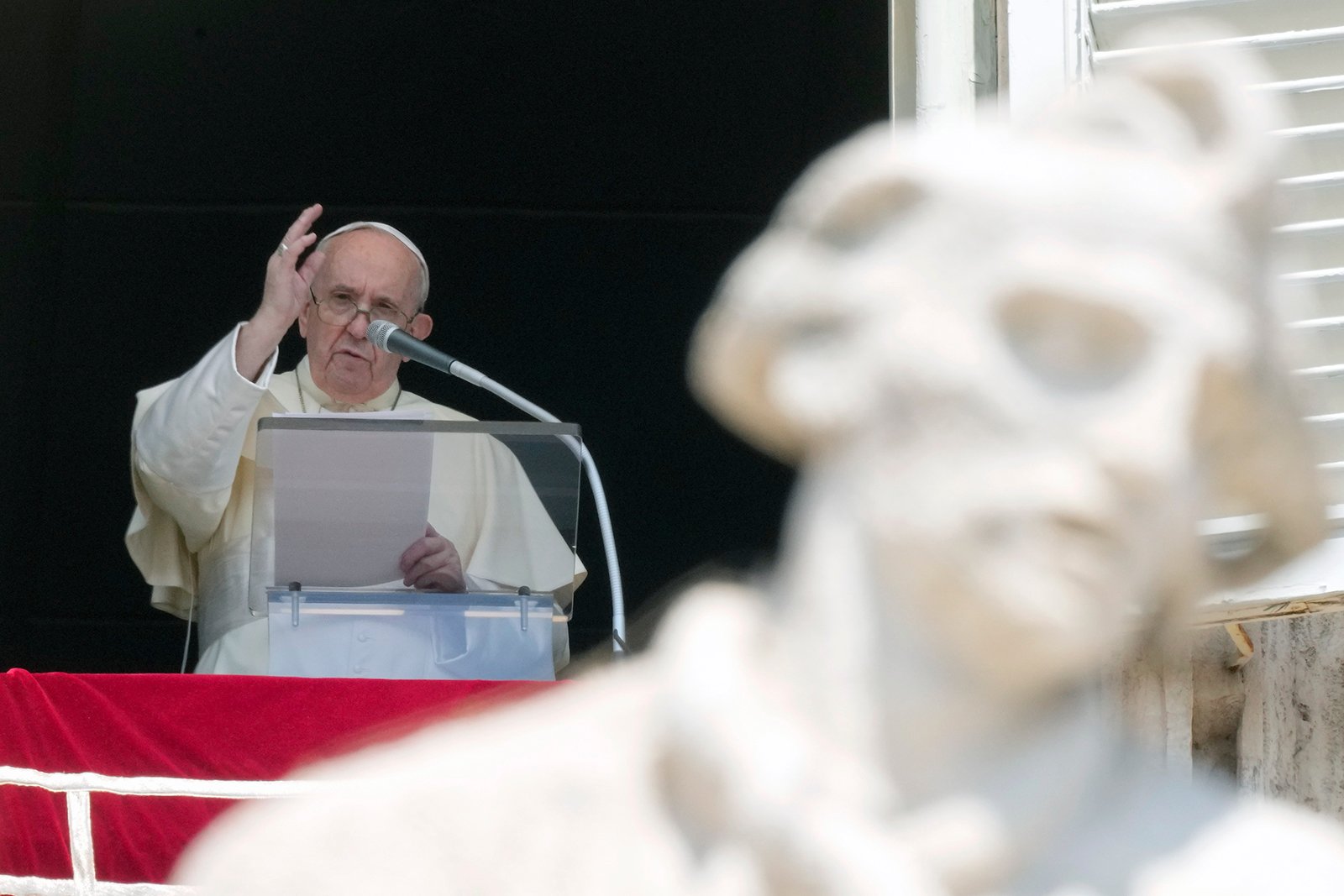 Pope Francis delivers his blessing as he recites the Angelus noon prayer from the window of his studio overlooking St. Peter’s Square, at the Vatican, Aug. 15, 2021. The pontiff said he shares “the unanimous concern for the situation in Afghanistan” and expressed his closeness to the people of Haiti after Saturday’s 7.2-magnitude quake. (AP Photo/Andrew Medichini)

Ehsani is also trying to get a letter into Francis’ hands in which the family appeals to the pope and the international community to help them leave the country.

“These are days of terror and the idea of falling into the hands of soldiers terrifies me and is anxiety inducing,” read the appeal, which was shared with RNS.

“If they were ever to capture me or other members of my family I would rather die,” wrote the family. “We hid with the hope of being found as late as possible. But we don’t know for how long we will be able to protect ourselves in this way.”

With the Taliban going house to house looking for unmarried women, the letter said, it pleaded “to save us from this situation, which is endangering me and many other families, especially Christian girls.”

Francis made an appeal for Afghanistan on Sunday, hours before the Taliban overran Kabul. “I join in the unanimous concern for the situation in Afghanistan. I ask all of you to pray with me to the God of peace, so that the clamor of weapons might cease and solutions can be found at the table of dialogue,” he told faithful after his weekly Angelus prayer.

Meanwhile, the Italian branch of the Catholic aid network Caritas, which has been active in Afghanistan since the early ’90s, announced in a press release on Sunday that the current situation “will lead to the suspension of all activities.”

“Fears are growing about the possibility of maintaining a presence even in the future, as well as for the safety of the few Afghans of Christian belief,” the statement read, adding that Catholic missionaries and priests are also leaving the country. Caritas Italy said it will continue helping Afghan citizens, especially children, from Pakistan.

“I don’t understand why the West left Afghanistan this way,” Ehsani said, “after 20 years of sacrifices, of democracy.”

But Ehsani doesn’t want to get into the politics: “I just want to save this Christian family and possibly others,” he said, adding that for some it might just be “a matter of days” before they are discovered or worse.

RELATED: Afghanistan and the moral imagination