(RNS) — Every August for the past 76 years we have marked the anniversary of the bombings of Japan’s Hiroshima and Nagasaki. To date, the bombs dropped on the two cities three days apart in 1945, killing and maiming hundreds of thousands (mostly civilians) in the blink of an eye, have been the only use of nuclear weapons in combat. The strike cannot be ignored or overlooked. It should not be forgotten.

But I look forward to another anniversary, one that celebrates something that has not yet happened. I look forward to celebrating, year after year, the complete abolishment of nuclear weapons and to a world free of atomic bombs.

It is a small miracle that nuclear weapons have not been used again, despite being tested extensively, with at least nine nations possessing them. Small miracles, however, are no substitute for sound policy.

As long as nuclear weapons exist, there is a threat of use or the possibility of an accident with these weapons that harbor devastating destruction. These threats can be eliminated by banning all nuclear weapons.

Yes, some may view this as unrealistic wishful thinking. No one who lived through, witnessed or has any knowledge of the unparalleled destruction wrought upon Hiroshima and Nagasaki could possibly think nuclear weapons should be used again.

As Quakers, we have consistently called for the elimination of nuclear weapons and other weapons of war. Quakers, along with millions of people worldwide, support the 2017 Treaty on the Prohibition of Nuclear Weapons, the first international pact to comprehensively ban nuclear weapons. To date, it’s been signed by 86 countries, offering an aspiration for the complete elimination of these weapons.

However, no nuclear power, including the United States, has signed it. 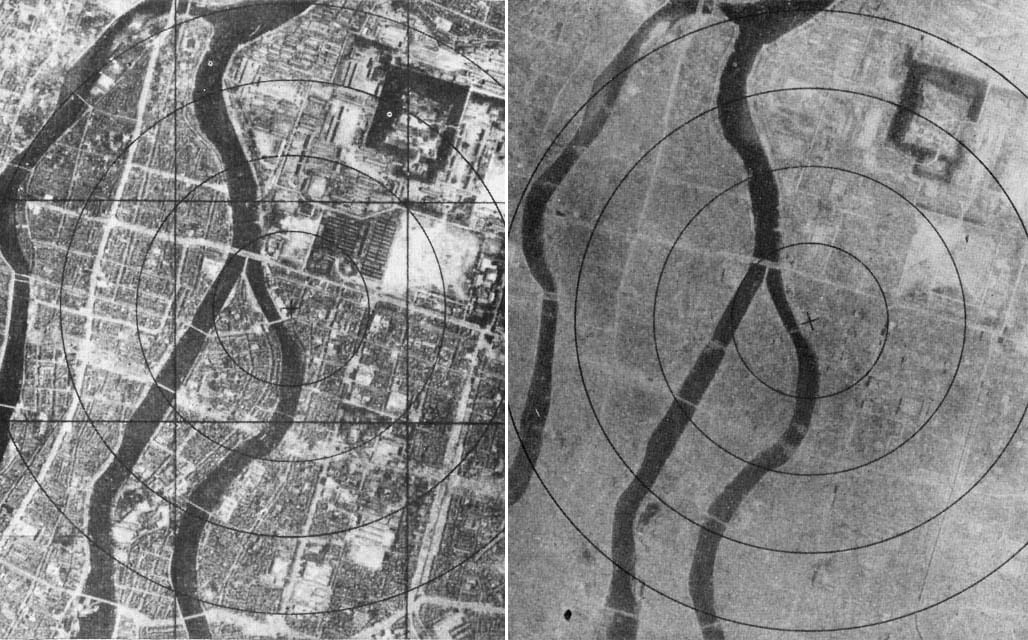 Hiroshima before, left, and after the atomic bomb in August 1945. Photos courtesy of US Army Archives/Creative Commons

It is equally true that the world has seen little if any peace since those tragic days in August 1945. Yes, thankfully, nuclear weapons have not been used. But that is no comfort for those on either side who died in Korea, Vietnam, Iraq, Afghanistan and other lethal military confrontations. People who died fighting for their country, or the uncountable civilian casualties we call “collateral damage,” are no less meaningful than those who perished in the nuclear bombings.

What can be done about the mind-numbing amount of death and destruction we willingly unleash across the globe, too often with the intention to dominate others?

Stop funding nuclear weapons and cut the Pentagon budget is the most obvious answer. President Biden has already requested $753 billion for both the Pentagon and the nuclear weapons budget, and the Senate Committee on Armed Services has offered an extra $25 billion on top of that request.

Is there no better use for those funds? During a deadly new wave and resurgence of the global COVID-19 pandemic, isn’t the production and distribution of vaccines across the globe a more worthy choice for taxpayer funds? This would be a productive way to make the world a safer place rather than bombs, fighter planes, tanks, drones and guns.

RELATED: War or peace? For Iran and the United States, it’s time to decide.

As a faith community with a long tradition of working to prevent nuclear war and the ever-increasing threat of arms proliferation, Quakers know this is about a lot more than money. We are trying to save something much more important than that — human life.

Progress has been made in reducing nuclear weapons since the Cold War; however we should continue to lead the way for all nuclear armed nations to ban these weapons forever. Our very existence is at stake. We have a moral obligation to make certain nuclear weapons should never be used again.

When that dream comes to fruition, it will be a day long worth marking.