JERUSALEM (AP) — As police protected them, three Jewish men stepped forward, placed their hands out at chest level and began reciting prayers in low tones in the shadow of Jerusalem’s golden Dome of the Rock.

Jewish prayers at Jerusalem’s most sensitive holy site, known to Jews as the Temple Mount and to Muslims as the Noble Sanctuary, were once unthinkable. But they have quietly become the new norm in recent years, flying in the face of longstanding convention, straining a delicate status quo and raising fears that they could trigger a new wave of violence in the Middle East.

“What is happening is a blatant and dangerous violation of the status quo,” said Sheikh Omar al-Kiswani, a top official with the Waqf, the Jordanian-backed Islamic trust that administers the site. “The Israeli police must stop providing protection to extremists.”

The hilltop compound is the holiest site for Jews, revered as the location of two ancient temples destroyed in antiquity. Three times a day for 2,000 years, Jews have turned to face it during prayers. It also is home to the Al-Aqsa Mosque, the third-holiest site in Islam.

Israel captured the hilltop, along with the rest of east Jerusalem and the walled Old City, in the 1967 Mideast war and later annexed it, a move that was not recognized by most of the international community. The Palestinians seek east Jerusalem as capital of a future independent state.

The flashpoint site is the emotional epicenter of the Israeli-Palestinian conflict. Many rounds of deadly fighting in the decades-long conflict have erupted around it. The most recent was in May, when an Israeli police crackdown on stone-throwing Palestinian protesters inside the mosque helped precipitate an 11-day war between Israel and Hamas in the Gaza Strip and violent upheaval in Israeli cities.

Since 1967, a loose set of rules known as the “status quo” have governed day-to-day operations at the site. Any actual or perceived changes to the status quo has the potential to ignite violence.

For decades, Jews avoided worship at the site for religious reasons. Many leading rabbis, including the country’s Chief Rabbinate, ruled after the 1967 war that Jews “should not enter the entire area of the Temple Mount” out of concern for ritual impurity and uncertainty over the exact location of the ancient Temple’s holy of holies.

Amnon Ramon, a senior researcher at the Jerusalem Center for Policy Research, said the issue of Jewish prayer has transformed in recent decades “from a matter that was on the fringe to a subject in the mainstream for the religious nationalist public.” Most in that community appears to support some degree of Jewish worship there, as do a growing number of ultra-Orthodox Jews.

New Prime Minister Naftali Bennett, who leads a small, hard-line religious party, caused an uproar last month on the Jewish fast day of Tisha B’Av when he said Israel was committed to protecting “freedom of worship” for Jews at the compound. His office quickly issued a clarification stating there was “no change whatsoever” in the status quo.

Rabbi Eliyahu Vebr, head of the Temple Mount Yeshiva, said that for over a year, he has entered the site daily, most of the time with at least 10 Jewish men necessary for a group prayer.

“So long as things are not conspicuous, in a way that disturbs, the police allow it,” he said. Some days there is friction with Muslim worshippers and authorities, he said, but mostly there isn’t. Palestinian media, including those of the Islamist militant group Hamas, publish videos almost daily of “Jewish settlers storming the Al-Aqsa Mosque.”

Flanked by a detachment of paramilitary Border Police troopers, a quorum of 10 men entered the shrine on a recent morning and made their way to a secluded area of the eastern side of the compound. They prayed discreetly in hushed tones while a handful of guards from the Waqf watched from a distance.

Kiswani, who is the Waqf’s director of the Al-Aqsa Mosque, said Muslim authorities have strongly protested the Jewish prayers, both to Israeli police and to the Jordanian government.

But he said Israeli police forcibly prevent Waqf personnel from approaching Jewish worshippers and in some cases, arrest or expel them. “The mosque is a pure right for Muslims alone, and there is no prayer in the mosque except for Muslims,” he said.

Israeli police said its forces operate “in accordance with the terms of visitation customary at the site,” while maintaining public order. It said the regulations for visitors are determined by the government and court decisions.

Akiva Ariel, a spokesman for Beyadenu, a Jewish activist group advocating for Jewish prayer at the site, said things began to change under the government of former Prime Minister Benjamin Netanyahu, who led the country for 12 years before he was ousted in May.

“The police turn a blind eye” to the worship, so long as it’s done inconspicuously, Ariel said. During the recent visit, the men conducted the ancient blessing, in which priests make V’s with each hand, spreading their ring and middle fingers, and quietly recited a special benediction, while others performed surreptitious bows while praying. But they did not don prayer shawls or phylacteries — small cases holding slips inscribed with passages of Scripture bound to the head and arm— that are customarily worn during morning prayers.

For many Jewish Temple Mount activists, the main aim is a place for Jewish worship at the site, Ariel said. “This is our holiest place. We aren’t demanding that Muslim be evicted from here, heaven forbid,” he said.

Palestinians have long feared that Israel may change routines at the Al-Aqsa Mosque compound, such as partitioning the site, similar to a holy site in Hebron revered by Muslims as the Ibrahimi Mosque and by Jews as the Tomb of the Patriarchs.

Ramon said that Palestinians fear that if they give an inch, Israel may take a mile.

“It’s hard to know how and when it will explode,” he said. “But it definitely can happen.” 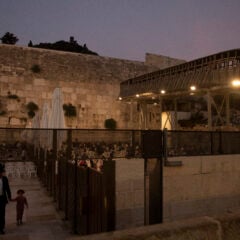 Opinion
Can American Muslims and Jews help bring peace to Israelis and Palestinians?
Follow us on Facebook!
Submit your photos to RNS