WASHINGTON (RNS) — The granddaughter and son of the Rev. Martin Luther King Jr. stood on the National Mall where their forebear keynoted the March on Washington 58 years ago and advocated for improved voting rights across the nation.

“In this country, it’s easier to register to own a gun than it is to register to vote,” 13-year-old Yolanda Renee King said on a stage on Saturday (Aug. 28) with the U.S. Capitol as its background. “Think about that. If you are a congressperson protecting firearms, why won’t you protect the right to vote? That is completely unacceptable.”

Martin Luther King III appeared shortly after his daughter to speak to some of the thousands who marched through the streets of the nation’s capital. The March On for Voting Rights protest passed Black Lives Matter Plaza, the White House and the Washington Monument before gathering at the Mall for the closing rally. Protesters called for passage of laws to enhance voting rights, specifically the John Lewis Voting Rights Advancement Act and the For the People Act, as well as D.C. statehood.

King’s son was one of many speakers who said a key turning point for Senate passage of legislation on these issues will be a change in or the end of the filibuster, which requires 60 votes rather than 51 for a bill to move forward. Recalling the recent toppling of statues of Confederate leaders, King said of the filibuster: “But the biggest monument to white supremacy remains and if we don’t tear it down, nothing else matters.”

While some say the filibuster is rooted in an aim for bipartisanship, King, who co-leads (with his wife and daughter) the Drum Major Institute, one of the sponsors of the march, said the tactic has been used for a century to block civil rights legislation.

The march was carried virtually and accompanied by several marches in other parts of the country, including Phoenix and Miami, and comes as more than a dozen states have passed bills that place new restrictions on voting. 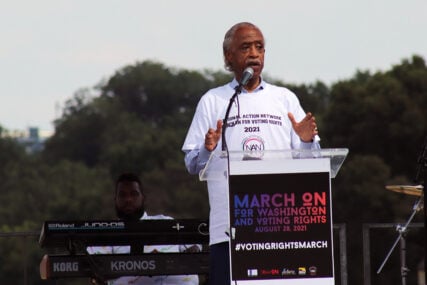 The Rev. Al Sharpton speaks at the March On for Voting Rights rally on August 28, 2021, in Washington, DC. RNS photo by Adelle M. Banks

The Rev. Al Sharpton, whose National Action Network also co-sponsored the event, estimated more than 20,000 people marched through the D.C. streets on Saturday. Far fewer stayed for the rally — and he said at least one bus headed home early due to issues with fainting on the hot day in Washington. In addition to the heat, the COVID-19 pandemic could have figured in the rally attendance. Organizers wiped off the on-stage microphone between speakers, and volunteers offered free hand sanitizer, disinfecting wipes and face masks, along with bottles of water.

He said the march was purposefully staged to have the Capitol in view.

“In that building the senators will decide whether to continue the segregationist legislative strategy of filibuster or whether they’re going to give the people of this country the right to vote with no prohibition,” said Sharpton. “That building is the target of our social justice movement. Not 58 years ago but today.”

Sharpton also compared Saturday’s gathering of people across races and religious affiliations to those who staged a protest of the 2020 presidential election on the same grounds in January.

“On Jan. 6, you saw an insurrection against people’s right to vote,” he said to the crowd, mostly sitting in the shade on the edges of the Mall instead of in the socially distanced seats in the hot sun in front of the stage. “Today you saw 20,000 walk through the streets to the Capitol to represent Dr. King’s resurrection of the right to vote.”

He noted Saturday’s march did not result in the broken windows and greater harm that occurred on Jan. 6.

“We are the real patriots showing America how to be at its best,” he said.

He called on President Biden as well as senators to take action on the filibuster and suggested this “summer of discontent” could turn into a “fall of action,” with allied “filibuster busters” returning for another protest.

Saturday’s protesters ranged from D.C. residents to people who traveled hours to get to the march. 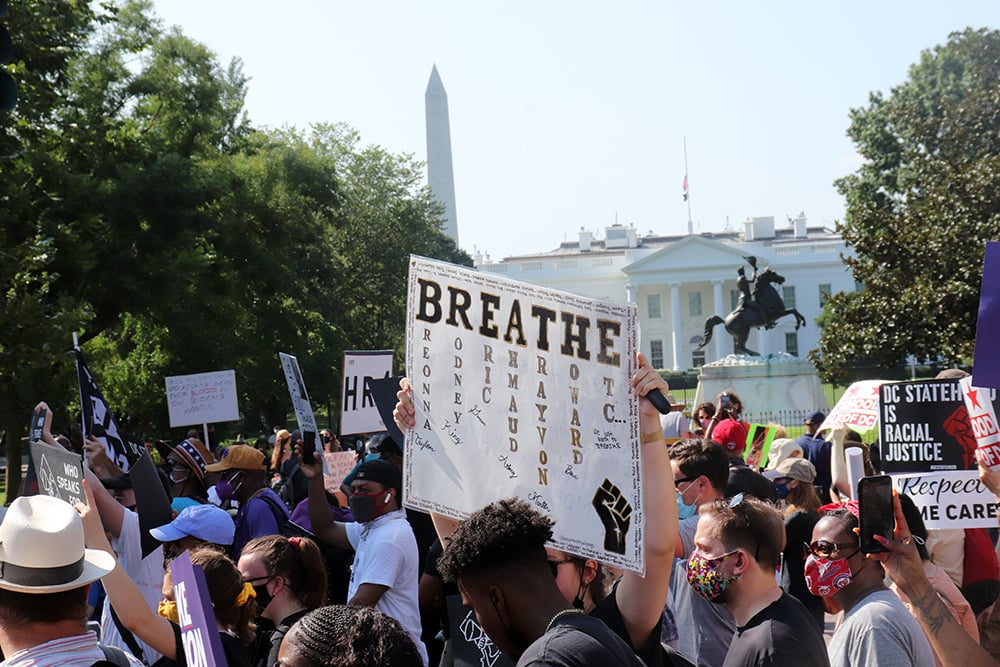 Michael Harris, a Christian activist from Greensboro, North Carolina, said he took part to lead a protest against the killing of Fred Cox, a young Black man in his community who was shot to death last year by a Davidson County sheriff’s deputy. Cox’s mother later spoke near the end of the rally about how her son had been killed outside a church.

Harris saw a direct connection between protests about voting and those about police violence involving people of color.

“We vote the right people in, we get the right things going on in our community,” he said in an interview as a pre-rally began before marchers headed toward the Mall.

Harris, who during the march intermittently called the group he traveled with and others to say Cox’s name, said it was important to turn faith into actions seeking justice.

“We got to have more than faith,” he said. “We have the power to get out here and fight, too.” Attorney Ben Crump stands with family members of people who have been killed in police violence, including Tenicka Shannon, right, mother of Fred Cox, during the March On for Voting Rights rally in Washington D.C., August 28, 2021. RNS photo by Adelle M. Banks

Vengu Lakshminarayanan, an atheist visiting D.C., said he would have attended the related march planned for Detroit but needed to be in Washington for a business trip.

“This is important for our country,” he said. ”I mean, our republic is being taken apart and if you don’t have the right to vote you don’t have any rights at all.”

The physics professor said despite his wishes for success for the Biden administration, the Senate can halt progress it might want to see on voting rights.

“The filibuster is a racist institution and it should be gotten rid of,” said Lakshminarayanan, who is originally from India. “A true democracy would not have a filibuster where a minority can dictate what the majority wants.” Rabbi Jonah Pesner, director of the Religious Action Center of Reform Judaism, speaks at the March On for Voting Rights rally on August 28, 2021. RNS photo by Adelle M. Banks

Rabbi Jonah Pesner, director of the Religious Action Center of Reform Judaism, who was one of the rally’s many speakers, said the crowd members in D.C. who stayed for the rally did not represent the full scope of support for voting rights that was being shown across the country.

He said Reform Jewish officials mobilized to help voters, especially people of color, gain access to the vote despite recent restrictions in cities like Atlanta, Milwaukee, Philadelphia, Pittsburgh and Miami.