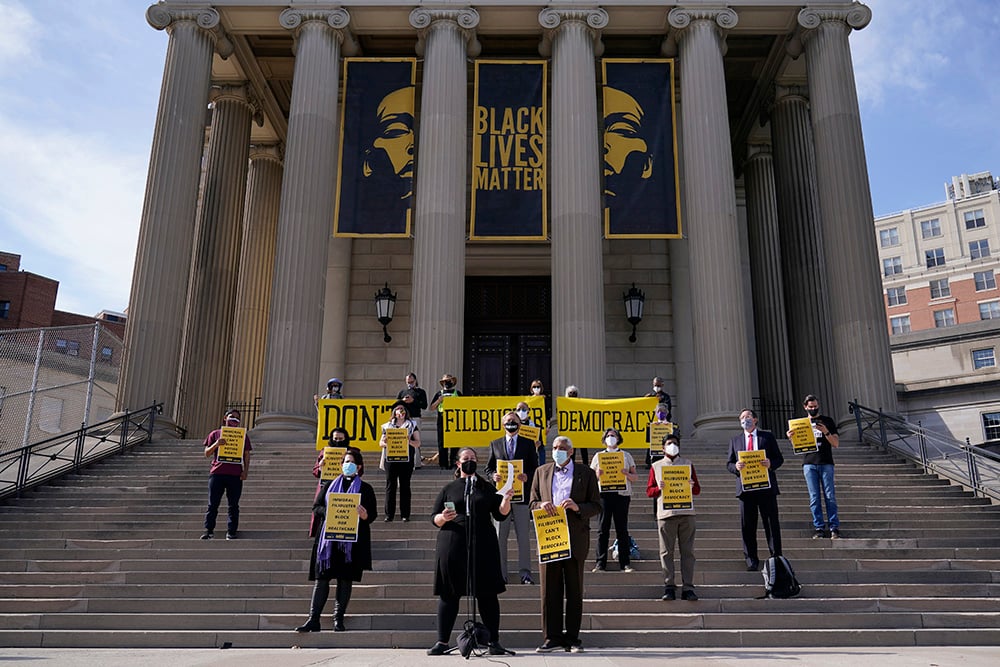 The Rev. Liz Theoharis, center at microphone, co-director of The Poor People’s Campaign, speak outside National City Christian Church in Washington, Monday, April 5, 2021. A coalition of interfaith leaders and activists met in Washington and online to demand an end to the filibuster, calling it an arcane and racist tactic that blocks the passing of moral policies. (AP Photo/Susan Walsh)

WASHINGTON (RNS) — Galvanized by recent laws that tighten voting access, a loose coalition of religious leaders led by Black clergy is rallying behind an agenda that is focused on voting rights but encompasses several issues, from ending the U.S. Senate filibuster to statehood for Washington, D.C., and a broad array of racial justice and poverty concerns.

The increasingly visible movement was on display Thursday (April 15) as the Rev. William Barber and Rev. Liz Theoharis, co-chairs of the Poor People’s Campaign, convened a virtual press event to call for the end of the Senate filibuster, which could prevent Republicans in Congress from frustrating the Biden administration’s planned legislation designed to benefit the poor and marginalized — especially people of color.

The filibuster rule requires the party in the minority in the Senate to force many bills to be agreed to by a 60-vote supermajority instead of a simple 51-vote majority.

“By supporting the filibuster, you are either an advocate or an enabler of systemic racism, voter suppression, the denial of health care and the denial of living wages,” Barber declared via Zoom.

He added: “We have been working with this political sin for far too long.”

The event also unveiled a new pastoral letter signed by a number of prominent clergy that quoted the biblical Book of Isaiah’s warning, “Woe to those who make unjust laws,” and drew connections between Martin Luther King Jr.’s 1965 campaign in Selma, Alabama, for African American voting rights and modern-day religious pushback to controversial state-level election laws.

“As in 1965, the moral issue of voter suppression cannot be separated from economic justice. … For this reason, we join our voices to insist that the filibuster rules of the US Senate must not be allowed to prevent passage of federal voting rights protections this year,” it reads.

The filibuster has been whittled since 2013, when Senate Democrats, then in the majority, ended it for most judicial nominations; a Republican majority canceled the filibuster for Supreme Court nominees in 2017. Since Joe Biden’s election, activists and some Democrats have pushed to rid the Senate of the rule for all legislation.

In February, Sen. Joe Manchin, a West Virginia Democrat, hosted a meeting with Poor People’s Campaign activists about a possible $15 minimum wage. The Senate parliamentarian ultimately decided the minimum wage proposal couldn’t be included in the larger pandemic relief package — which would have potentially allowed it to avoid a filibuster — and an attempt to vote on it anyway resulted in eight Democratic caucus members voting against it, including Manchin.

Haynes was one of several faith leaders who rallied in Dallas last week to decry a pair of controversial election bills making their way through the Texas Legislature. Haynes said the bills, which include proposals to ban drive-thru voting and shorten early voting hours, simply “dress up Jim and Jane Crow in a tuxedo.”

Similarly, Hale connected the filibuster to the fight against a new voting law in Georgia that institutes voter ID requirements, limits drop boxes and bars most people from handing out food and water to those waiting in line to vote.

Bishop Reginald T. Jackson, who heads African Methodist Episcopal Church’s 6th District of Georgia, has said his entire denomination will boycott local companies headquartered in Georgia, such as Coca-Cola, if they don’t do more to fight the law. The boycott has been delayed but has, Jackson told Religion News Service, garnered a response: He plans to meet with several CEOs on Friday.

Among Jackson’s list of demands will be support for federal voting rights legislation such as the For the People Act. The bill is co-sponsored by Georgia Sen. Raphael Warnock, himself a clergyman who pastors Ebenezer Baptist Church in Atlanta, a historic Black church where King once preached. In March, he indicated that if Democrats couldn’t get 60 votes to pass his bill, he wouldn’t oppose eliminating the filibuster to get it through. 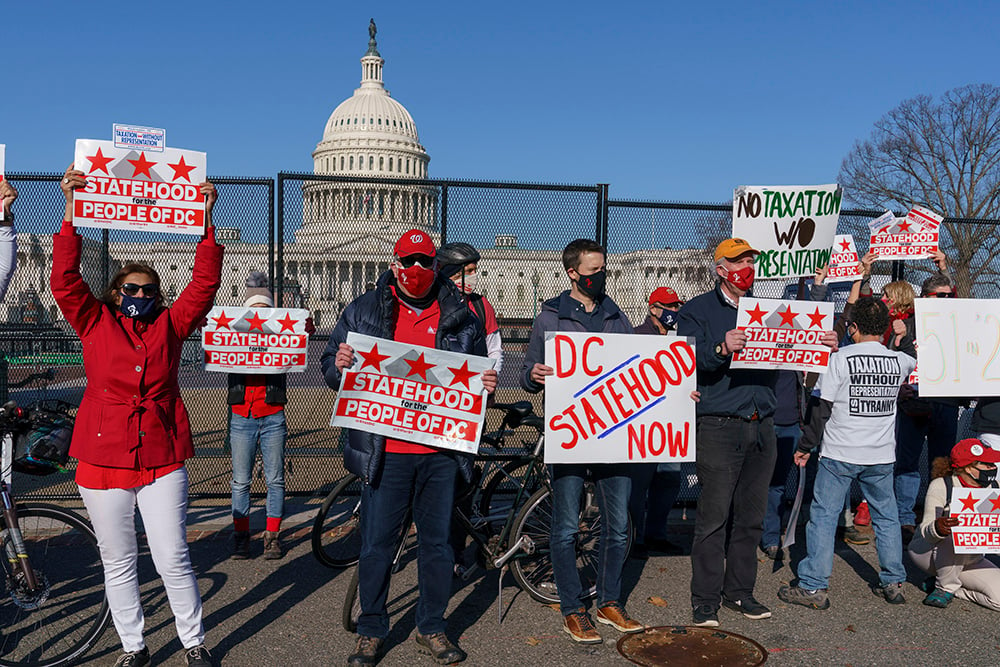 Advocates for statehood for the District of Columbia rally near the Capitol prior to a House of Representatives hearing on creating a fifty-first state, in Washington, Monday, March 22, 2021. The activists were able to gather near the Capitol building after the outer perimeter security fencing was dismantled this weekend. (AP Photo/J. Scott Applewhite)

Meanwhile, House Democrats are expected to pass legislation next week that would grant statehood to Washington, D.C., which is about 47% Black. Warnock is one of several senators who supports statehood, and language backing statehood is included in the For the People Act.

But the statehood push now faces an uphill battle in the Senate — unless lawmakers do away with the filibuster.

Faith leaders plan to make the religious case for statehood on Friday, when a multi-faith group will gather on the steps of D.C.’s National City Christian Church. Among them will be the Rev. Patricia Hailes Fears, pastor at Fellowship Baptist Church, who insisted statehood is a “moral issue,” tying it to the filibuster, which she called “problematic.” Fears noted that Friday is Emancipation Day — a local holiday celebrating the date slavery was abolished in D.C.

“Since I serve a God of justice, I think justice has to be done,” she said.

She’ll be joined by Bishop Dwayne Royster, pastor at D.C.’s Faith United Church of Christ. He argued the decades-long fight for statehood is tied to the long history of discrimination in the U.S.

“The denial of statehood is a denial of Black political empowerment in this country,” said Royster, who also serves as national political director for the religious advocacy group Faith in Action.

The Poor People’s Campaign lists granting D.C. statehood in a litany of demands unveiled in 2020, a position Barber reiterated Thursday.

“(Denying D.C. statehood) has deep roots in what systemic racism is all about,” he said. “That is, locking the ‘Chocolate City’ from having representation but at the same time you tax them the same way you do other people throughout this country.”

Others scheduled to speak Friday include Bishop Mariann Budde, the Episcopal bishop of Washington; Imam Talib Shareef, head of Masjid Muhammad, also known as the “Nation’s Mosque”; and Rabbi Charles Feinberg of the Interfaith Action for Human Rights.

Activists are hoping to enlist President Biden to endorse their filibuster campaign, a task likely to involve pressure from Black clergy given the key role Black Protestants played in his victory in the Democratic primaries. Biden has hedged on the filibuster in the past but recently expressed openness to eradicating it, and Democratic leaders are looking for ways to limit its use.

“It should be frightening to people who are unaware of the power of the faith movement,” she said.