(RNS) — Staccato Powell touted himself as an innovator who would bring a “new paradigm” after his 2016 election as an African Methodist Episcopal Zion Church bishop, assigned to oversee the western U.S. congregations in the predominantly Black denomination.

He was the first to set up a bishop’s residence in the Western Episcopal District, seeking to supervise church affairs and enhance church growth while living in the district, instead of traveling in and out of the six-state region.

But was he a pioneer or a swindler? Was he an entrepreneur who, as he said, used “sophisticated financing of church property” to enhance congregations and support their pastors? Or, as the remaining AME Zion bishops said, did he inappropriately use churches’ mortgages in a manner that led some of them to receive foreclosure notices?

A month after he was “disrobed” in a church trial as a bishop of the denomination that dates to 1796, the answers depend on whom you ask and whose perspectives you believe.

In an interview after the trial, in which Powell was found guilty of 20 counts against him, the former bishop told Religion News Service he intends to continue to use the title of “bishop” though he no longer holds that rank in the denomination of his birth.

Under his leadership, he said, the number of churches in the Western Episcopal District grew from 35 to about 50 and he encouraged those congregations to turn over a tenth, or tithe, of their collections to support the denomination’s connectional structure. This was a departure from the traditional assessment method.

“We ushered in a new paradigm of growth and expansion, which as a bishop we are mandated to do by the Book of Discipline,” he said.

But AME Zion bishops say Powell violated that AME Zion rule book by altering church deeds and conveying them to the entity he incorporated to handle district business.

Bishop Kenneth Monroe, senior bishop of the AME Zion Church, told RNS that more than half a dozen churches are in court over what denominational leaders consider an illegal transfer of deeds through an entity created by Powell that enabled the deeds to be used as collateral for loans. 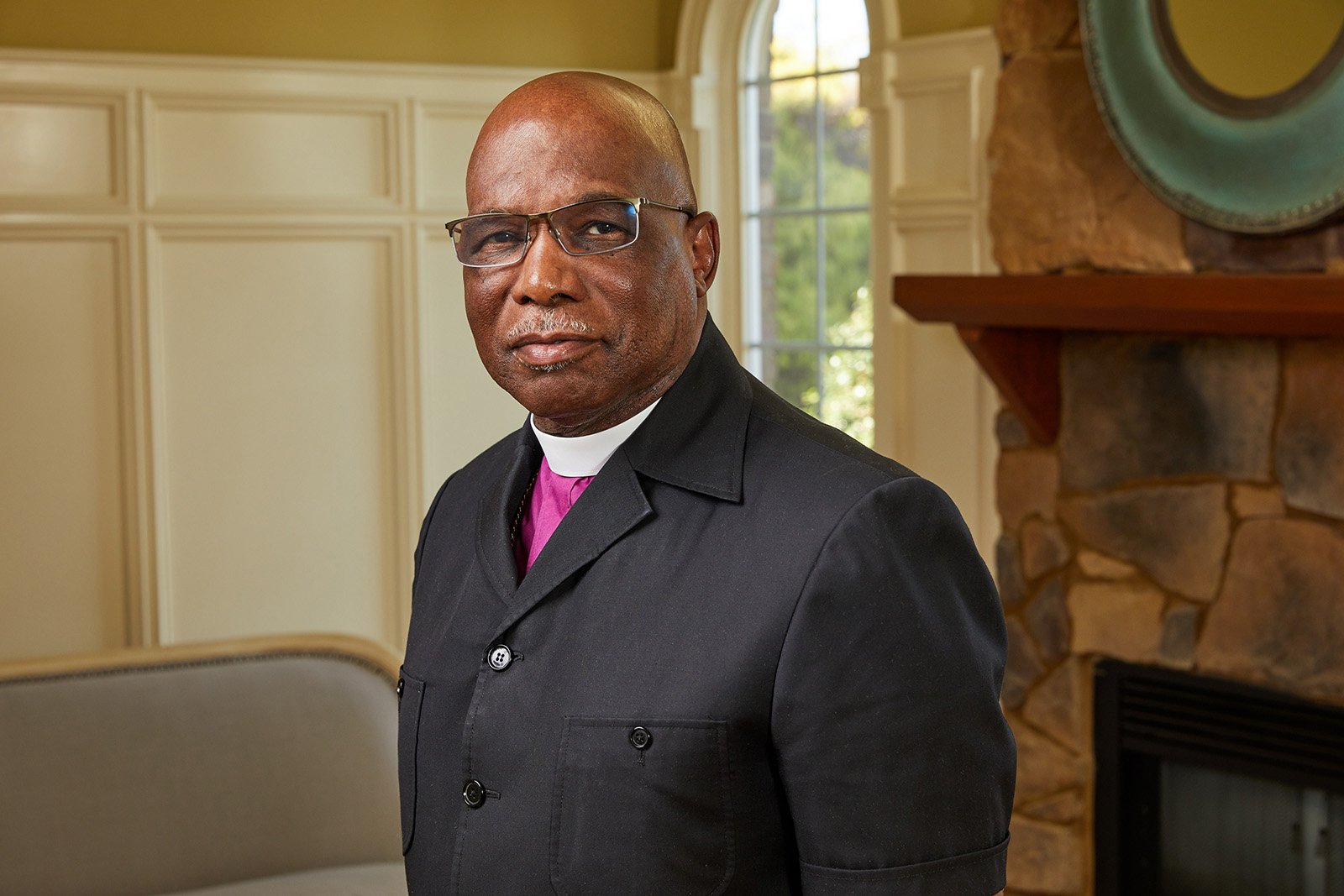 Bishop Kenneth Monroe in 2019. Photo by Robert A Lisak

As a result, at least one church was lost to foreclosure, a bankruptcy judge said.

He said Powell’s removal was not unprecedented but rare. Another bishop was removed in 1948 for what Monroe described as less severe charges than the ones faced by Powell. The 1974 history of the denomination, “The African Methodist Episcopal Zion Church: Reality of the Black Church,” notes one other bishop who was disqualified, saying both were “disciplined by the church for laxity in character and failure to live up to the standards by which they were elected.”

“This is a very difficult time for our church,” Monroe added. “We all are saddened by it and hopefully we’ll be able to get over it.”

A recent summary of ongoing proceedings by the U.S. Bankruptcy Court of the Eastern District of California states Powell signed the deed of First AME Zion Church of Los Angeles “himself, even though he held no office in that local church.” The AME Zion Western Episcopal District, the entity Powell incorporated, “had no authority to pledge that property as collateral for any loan.” First AME Zion Church of Los Angeles is tied up in the U.S. Bankruptcy Court of the Eastern District of California. Image courtesy of Google Maps

Using the church’s property, the district, of which Powell was CEO, obtained loans in the amounts of $1.2 million and $1.5 million, according to the court summary. The church only learned of a problem when lenders started foreclosure proceedings. The entity Powell incorporated subsequently filed for Chapter 11 protection.

A complaint filed in the same bankruptcy court by University AME Zion Church of Palo Alto, California, states the district likewise secured “millions in loans” after Powell “fraudulently” pressured the church to transfer its property. The document includes an image of a text message exchange in which the church’s pastor writes of receiving a notice of foreclosure and asks what to do.

“Put the letter in the draw and remember what I told you,” was the response, which the complaint said was texted by Powell, with a promise that the situation would be resolved.

“Yet, Powell did not ‘resolve’ the matter,” the complaint states.

Leaders of the two churches, each of which is seeking to regain the deeds to its property, either could not be reached for comment or declined to describe details of the bankruptcy proceedings.

Powell also said he was “not at liberty to discuss the particulars of that,” nor of the specific charges against him by his former denomination, which is based in Charlotte, North Carolina. But he said “when we ran into financial difficulty,” the Chapter 11 bankruptcy filing occurred “for the express purpose of reorganizing so that no churches would be lost.” 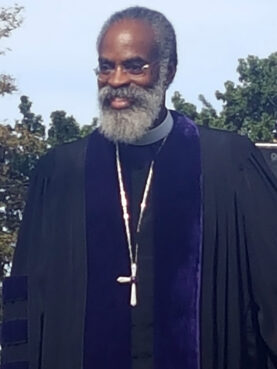 When the AME Zion Church’s Board of Bishops announced the suspension of Powell, they accused him of “severe infractions and maladministration” that involved mishandling of millions of dollars related to church mortgage funds.

A document Powell has issued in response states: “Regarding mortgaging church property, Bishop Powell innovatively employed sophisticated financing of church property to invest in and support the vision and mandated work of the Western Episcopal District.”

According to the complaint filed with the court in January on behalf of the AME Zion Church of Palo Alto, “Powell’s scheme is currently the subject of an ongoing FBI investigation.”

Asked about that claim, the FBI said it could neither deny nor confirm that such an investigation exists.

The Rev. Tony D. Henderson, a pastor and the presiding elder of the AME Zion Church’s Denver District, said he thinks his friend’s ouster at the denomination’s General Conference in July was an “emotional decision” rather than an informed one.

Henderson, an Omega Psi Phi fraternity brother with the former bishop, said he doesn’t think Powell intended to defraud or hurt the church but rather sought to improve it.

“I would agree that what Bishop Powell was doing out in the West was innovative, is innovative,” he said, even if some bishops did not approve of his approach. He believes Powell was seeking to use church deeds to raise money to help others rather than leaning on individual church members to help their congregations meet their financial obligations to their denomination.

“From what I saw and from the conversations we had as presiding elder and bishop,
his vision was to, instead of commodifying the people, draining the people, use the land as a way to bring housing to underserved areas in the West, to bring jobs to the people in the West,” Henderson said. “And that seemed to be his goal, his vision, his focus, not to gain things for himself.” “When you’re a trailblazer, people will challenge what you’re doing because it’s not been what was done in the past,” said Prothro-Harris. “So, in order to revitalize and to grow and to expand, you needed new healthy ways of creative financing to be able to replenish the pews and to do ministry work that was not necessarily always identified as practical or traditional.”

Prothro-Harris, like Henderson, is a member of Omega Psi Phi, the international organization for which Powell once held the role of grand chaplain. The pastor said the entity Powell incorporated was “instrumental” in helping his church enter a 2018-2019 subleasing arrangement with another church in a local strip mall.

“While there are challenges that we all face, I would have loved for us to be able to manage this situation amicably, and not look as though we’re trying to separate ourselves from an individual for business and political purposes.”

Monroe, the senior bishop, said of the denomination’s decision to remove Powell as bishop: “Regrettably, we did what we had to do.”

Though some church members are upset by the controversy, he said he hopes the denomination will be able to overcome it.

“The church is hurting,” he said. “We’re trying to find ways to recover and restore and move forward with the ministry for which God has called us to do.”

Asked by RNS if, given the allegations leveled against him and the questioning of his mishandling of funds, he expects to be criminally charged, Powell responded: “I expect to be totally exonerated.” 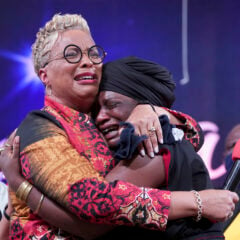 News
Women making strides in leadership of Black denominations amid hesitancy
Follow us on Facebook!
Submit your photos to RNS