VATICAN CITY (RNS) — In Hungary, where politicians have sought to create walls to preserve the country’s identity amid the migration crisis in Europe, Pope Francis advocates for building bridges with neighbors of other religions and backgrounds.

“This is what I wish for you: that the cross be your bridge between the past and the future,” the pope said in his closing remarks after the Angelus prayer on Sunday (Sept. 12), his last words to the country before he set off to Slovakia for the second leg of his trip, where he will be until Sept. 15.

Francis hopes to rekindle faith and unity in these central European countries that survived Nazi and then Soviet control and continue to fight for their identity amid modern crises brought on by the COVID-19 pandemic, migration and globalization.

Speaking to Hungarian faithful in the large Heroes’ Square in Budapest, Pope Francis recognized how much religion has contributed to sustaining the Hungarian identity as “the lifeblood of this nation.”

“Yet the cross, planted in the ground, not only invites us to be well-rooted, it also raises and extends its arms toward everyone,” the pope said, adding that while the roots of the country must remain firm, the cross is a reminder to reach out to the other “without defensiveness.”

“My wish is that you be like that: grounded and open, rooted and considerate,” Francis said, before leaving for the airport.

Pope Francis’ short stay in Hungary, only nine hours, was initially met with anger by local Catholics who hoped the pope would stay in the country longer. His brief stay has been interpreted by some as a consequence of Francis’ disagreements with the conservative and nationalistic Hungarian prime minister, Viktor Orbán.

RELATED: Questions on immigration, Communion loom over Pope’s trip to Hungary and Slovakia

At the Museum of Fine Arts in Budapest, the pope met with the local civil and political authorities, including Orbán, with whom he held a private meeting. The meeting was described as “cordial” by the Vatican, and the discussions focused on “the role of the Church in the country, the commitment to the protection of the environment, the protection and promotion of the family.”

In an interview with Spanish public radio COPE, published Sept. 1, Francis said in his meeting with Orbán that he planned “not to go around with a script.” 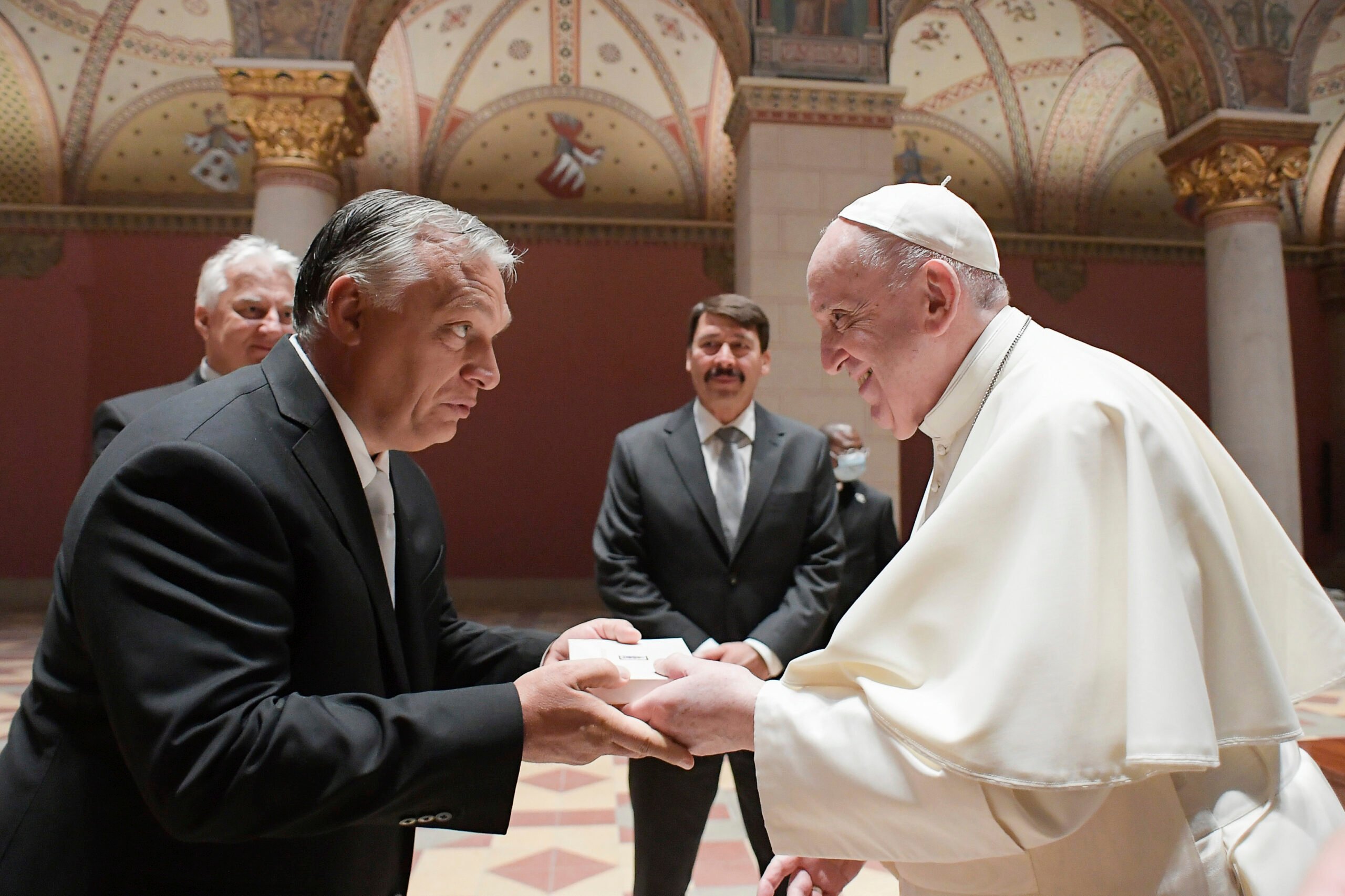 “When I am in front of a person, I look him in the eyes and let things come out,” the pope added in the interview, stating he prefers to have a “concrete” approach instead of having preconceived notions.

Francis also met with members of the local bishops’ conference, where he stressed “the Hungarian Church must be a builder of bridges and promoter of dialogue.”

Bridge-making was once again at the heart of the pope’s words to representatives of the Ecumenical Council of Churches and the Jewish community in Hungary.

“Whenever we were tempted to absorb the other, we were tearing down instead of building up. Or when we tried to ghettoize others instead of including them. How often has this happened throughout history! We must be vigilant and pray that it never happens again,” the pope told the religious representatives.

He also urged faith leaders to not give into “divisive words” and instead speak “words of openness and peace,” especially in a world already plagued by war and conflict.

The highlight of the papal visit was the Eucharistic Congress, a meeting of lay and religious Catholics centered on the sacrament of Communion and aimed at promoting evangelization, prayer and adoration. Pope Francis said the closing Mass at the event and during his homily laid out three steps for faithful wishing to follow in Jesus’ footsteps.

Referring to the importance of proclaiming the Gospel, Francis said, “The Eucharist is here to remind us who God is.” Faithful must seek to follow Jesus in a “concrete way,” he said, adding, “the ritual elements” of the Eucharist are but an addition to “the simplicity of Bread ready to be broken, distributed and eaten.”

The pope also offered practical advice on discernment, or spiritual reflection, through Christ, which must avoid the desire “to reign with power in order to silence our enemies.” Through an adoration of the Eucharist, he said, we can heal from “our self-absorption, open our hearts to self-giving, liberate us from our rigidity and self-concern, free us from the paralyzing slavery of defending our image and inspire us to follow him wherever he would lead us.”

Francis’ homily called faithful to “walk behind Jesus” by welcoming the vulnerability of encounter and showing a “willingness to let ourselves be broken for others.”

The papal message for unity and bridge-building was brought home by the Archbishop of Budapest, Cardinal Péter Erdő, welcoming Francis at Heroes’ Square.

“Budapest, at the center of Hungary and Europe, is a city of bridges. We feel the vocation to be the bridges between East and West, between different cultural and religious worlds and between nations,” he said.

RELATED: For New York celebrity priest, 9/11 closure will come with tolerance for ‘every path to God’

News
‘Some wanted me dead:’ Pope acknowledges right-wing critics
Follow us on Facebook!
Submit your photos to RNS