NAIROBI, Kenya (RNS) — Amid celebrations in a predominantly Anglican region in western Kenya, the Rev. Rose Okeno was enthroned as bishop of the Butere Diocese on Sunday (Sept. 12).

Okeno, 54, was consecrated in a ceremony presided over by Archbishop Jackson Ole Sapit, the primate of the Anglican Church of Kenya, making her the first woman to be a full Anglican bishop in the East African country, where the consecration of women as bishops is still controversial.

“By the grace of God, I accept to be your bishop,” the long-serving cleric said in her charge after the consecration. “Our election as the fourth bishop of the diocese is a strong confirmation that indeed God is doing a new thing in the history of the church.”

As bishop, Okeno will serve a rural population where the majority of the faithful are small-scale farmers and traders. She was elected on July 20 by a majority of a 23-member college of delegates, beating two male contenders.

The new bishop has promised to remain faithful to the truth, guiding people to celebrate virtue and shun vice. She also vowed to serve the disenfranchised and marginalized in her diocese.

“We will seek to remain faithful to the truth, denounce all evil that subverts justice and the welfare of those we serve,” said Okeno, while promising to advocate for the rights of girls and children and the empowerment of women and other disadvantaged people.

“We shall call out those who use positions of influence, even within the church, to harm the weak.”

Ole Sapit praised Okeno’s courage for putting herself forward as a contender for bishop of Butere and winning. Like in many areas of Kenya, she will lead a patriarchal community where most top leadership positions — even in the church — are held by men.

“I congratulate her for rising above cultural norms and … making history as the first ACK (Anglican Church of Kenya) woman bishop,” said the primate.

Her consecration drew celebration among religious and social leaders, with some saying such women of courage were needed in Kenya and worldwide at the moment.

“It is times like these when we need such strong women, women who are ready to serve,” Charity Ngilu, an Anglican who is the governor of Kitui County, was quoted in the press as saying.

Still, the cleric’s enthronement has defied a 2018 moratorium of the Global Anglican Future Conference, known as GAFCON, on ordination of women. While meeting in Entebbe, Uganda, the GAFCON archbishops resolved to halt the consecration of women into the episcopate until such a time when a consensus is reached. In the meantime, the conservative movement was to uphold the historic practice of consecrating men only.

But Kenya and Uganda, according to reports, had pushed for the consecration of women bishops. Although the two provinces had not consecrated any since then, Kenya produced two quick ordinations this year.

On Jan. 20, the Anglican Church of Kenya ordained the Rev. Emily Onyango, a 59-year-old scholar and researcher, as an assistant bishop of Bondo, a diocese on the edge of Lake Victoria. Months later, Okeno was elected.

While the church in Kenya may appear to be defying the moratorium, some Anglican clerics say it depends on the diocesan synods.

“The GAFCON moratorium is still in force, but it’s not binding. We are in a loose fellowship where, when one diocese takes an action, the other does not have to do the same. Even with this, we still claim to be together. It is unity in diversity,” said retired Anglican Bishop Julius Kalu of Mombasa.

In Africa, Anglican women bishops remain rare. Okeno is probably the fifth, after Onyango — also a Kenyan. In 2016, the Rev. Elizabeth Awut Ngor was consecrated as an assistant bishop in the South Sudan diocese of Rumbek. The South African diocese of False Bay elected the Rev. Margaret Vertue bishop in October 2012 and consecrated her as bishop in 2013.

In 2012, Ellinah Ntombi Wamukoya was ordained as bishop of Swaziland Diocese in southern Africa. Wamukoya died from COVID-19 in January this year. 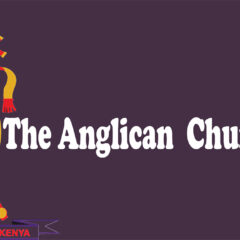