ALEXANDRIA, Egypt (RNS) — The small apartment house, on a dusty, quiet street in what was once the core of this city’s Greek Quarter, boasts a modest marble sign in Arabic, English and Greek noting that “Cavafys’ House” — a museum dedicated to the poet Constantine Cavafy — is on the second floor.

Above visitors’ heads as they enter the building is a thicket of electrical lines that awkwardly anchor a structure that seems more comfortable in the past than the present. Upstairs on a recent weekday in August, a handful of people viewed the desk, library and death mask of a man considered one of the greatest poets of the 20th century.

He was born and died in Alexandria, Egypt, then home to a large Greek community that began immigrating to Egypt in the 19th century. Writing primarily in Greek and little published during his lifetime, Cavafy’s works have been translated into more than 40 languages. He was popularized among English readers by writers such as T.E. Lawrence, Lawrence Durrell, Arnold Toynbee, T.S. Eliot and E.M. Forster, the last of whom knew him from his own time in Alexandria. 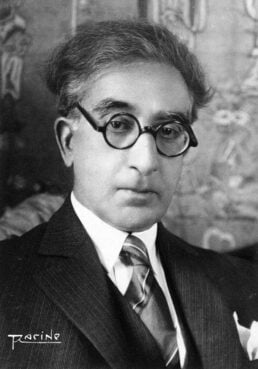 He is also the only figure in Egypt with a museum dedicated to a non-Muslim or non-Arab, barring ancients who lived before either Christ or Muhammad, in the country.

Yet, Cavafy is an unlikely symbol of Greek culture and Christianity in Egypt. “Where could I live better?” he wrote about his modest building, which for a time also hosted a bordello. “Below, the brothel caters for the flesh. And there is the Church which forgives sin. And there is the hospital where we die?”

For decades after his death in 1933, the apartment was a cheap pension, or rental, after Cavafy’s death before being turned into a museum by the Cavafy International Committee in 1991.

Much else has changed. The Pension Amir, on the floor below, is long gone. The Greek hospital nearby, believed to stand on top of the ruins of the palace built in honor of the Roman Emperor Hadrian, is in shambles. Only the Church of St. Nicholas, which had closed a dozen years before, opened again in May 2020, as coronavirus raged.

Its return represents the staying power of the Christian faith in this 90% Muslim country — and in Cavafy’s life. “At the end of his life, he was getting treatment at the Greek Hospital, and a priest started seeing him and kept begging to give Cavafy his last rites. Cavafy at first refused but, eventually, relented (because) he felt guilty about it,” said Mohammed El-Said the docent of the museum who has worked there since it opened. 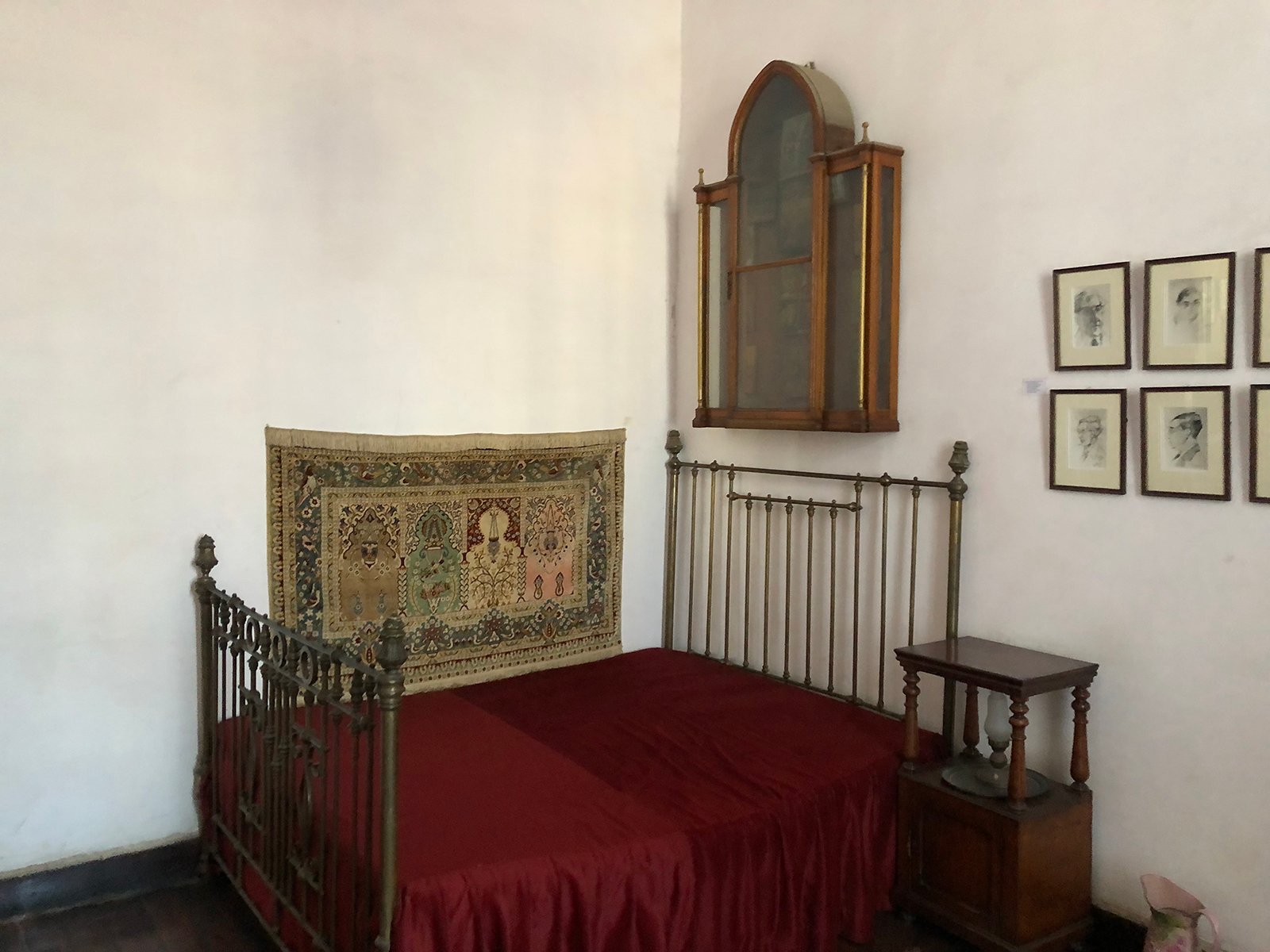 Cavafy’s more famous poems draw on ancient Greek mythology or homoerotic themes, but he also drew on the imagery and ideas of the Greek Church. Visitors to the museum will find a large cabinet above his bed filled with an array of religious icons.

Late in the afternoon, a small group of Greek women enters, and they speak in excited tones as they explore the rooms. “I teach some of his poems here at the Greek school not just because he is from Alexandria,” says Theodora Voti, a teacher at the Greek school in Alexandria. “It is because Cavafy is very important to modern Greek literature, of course, and world literature.”

When the museum first opened in 1992, few of the visitors were Egyptian, according to El-Said, but after the turn of the 21st century, when the internet became more readily available, many Egyptians were able to engage with chapters of their history left out of the textbooks. Still, El-Said adds, when Egyptian visitors do come, they are rarely from Alexandria. A marble sign in Arabic, English, and Greek notes the Constantine Cavafy apartment museum is on the second floor in Alexandria, Egypt. RNS photo by Joseph Hammond

Not that anyone strolling the surrounding streets could miss the city’s Greek history, even though the city only harbors perhaps 400 Greco-Egyptians today. At the Délices Patisserie, which opened down the street in 1922, little blue and white flags atop their cakes are a reminder that it is also still Greek-owned. The Café Trianon, which Cavafy frequented and which serves Greek dishes, still exists as well. Across the city, even in newer areas, a sprinkling of Greek names or restaurants can be found.

For many Egyptians the issue isn’t Cavafy’s ethnicity or faith but his sexuality that matters. Mohammed El-Said at the apartment museum of poet Constantine Cavafy in Alexandria, Egypt, in Aug. 2021. RNS photo by Joseph Hammond

“There are a lot of famous people who are gay, and it shouldn’t matter at all in Egypt or elsewhere,” said El-Said. “Cavafy is globally important, and I make this point to Egyptians all of the time. Not only him, but some Greek visitors also seem troubled by this fact. They fail to see Cavafy’s bravery in his ideas and to separate the body which is long gone with the ideas that live on.”

The poet also suffers from his cosmopolitanism.

“For the majority of the educated elites, he is viewed favorable as part of a nostalgic view of a ‘Belle Epoch’ and as an Alexandrian literary figure,” said Mustafa Ahmed, a co-founder of Save Alex, a nonprofit that seeks to preserve the city’s architectural heritage.

However, Ahmed added, “there is a smaller segment who (view) the legacy of Cavafy through a post-colonial lens that seeks to argue against the narrative that glorifies everything with foreign connections from the colonial era.”

But recently, Cavafy’s reputation is profiting from an unlikely source. Egypt’s Greek past has proven a useful instrument of soft power for Egyptian dictator Fatah El-Sissi, who came to power in a 2013 coup that toppled the President Mohammed Morsi, who was affiliated with the Muslim Brotherhood. 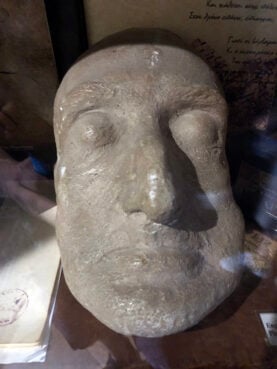 The death mask of poet Constantine Cavafy on display at a museum in Alexandria, Egypt. RNS photo by Joseph Hammond

Following the coup, many members of the Muslim Brotherhood fled to Turkey, where they were allowed to operate. Territorial disputes, mostly over natural gas fields in the Eastern Mediterranean, have added to tensions between Cairo and Ankara.

“The proxy war between Turkey and regimes that oppose Ankara’s support for the Muslim Brotherhood helped Greece boost ties with those countries,” said George Meneshian, an international affairs analyst in Athens.

As a result, Egyptian-Greek ties have blossomed, and in 2018, Egypt launched an initiative with Greece and Cyprus to rediscover their lost cultural ties (including, most recently, the announcement of the discovery of a new Greco-Roman archeological site near Alexandria). The current Greek ambassador to Egypt, a Greco-Egyptian, has referred to these new ties as “going back to our roots.” Earlier this year, “Man of God,” a film about St. Nektarios, a contemporary of Cavafy who spent much of his life in Egypt, proved to be the biggest box office success in both Greece and Cyprus since the COVID-19 pandemic began.

And now a government English-language tourist website describes the Cavafy Museum as a “must” visit. 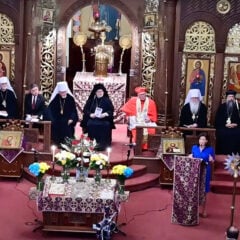