(RNS) — A survey exploring the lives of Muslims in the United States found that Muslim women were more likely than men to have personally experienced Islamophobia, that younger Muslims were more likely to try to conceal their religious identities and that many Muslims self-censor themselves out of fear of how others may react to them.

The report, “Islamophobia through the Eyes of Muslims,” was released Wednesday (Sept. 29) by the Othering & Belonging Institute at UC Berkeley. A total of 1,123 Muslims in the U.S. participated in the 2020 survey that was virtually conducted between Oct. 14 and Nov. 2.

The goal of the survey, according to the report, “was to ask US Muslims to assess the impacts of the othering and discrimination they face because of their religious affiliation.”

The report is described as groundbreaking in that it focuses “on the people living with Islamophobia, documenting their collective experiences and registering their voices,” instead of solely analyzing media coverage or documenting negative statements about Muslims.

Basima Sisemore, a researcher for the Global Justice Program at the Othering & Belonging Institute, told Religion News Service that with this survey, they are “centering and uplifting the voices of Muslim Americans.”

Sisemore said the survey also highlights the diversity of the U.S. Muslim population. Most (90.7%) are college graduates and 92.4% were either native English speakers or speak English very well, according to the report, while 83.5% of respondents spoke another language besides English at home. A majority of participants (61.2%) were foreign-born, while 38.8% were born in the U.S.

Participants were asked a range of questions, including who they believed was most at risk of experiencing Islamophobia and if and how often they’ve experienced it, whether they believed Islamic values were consistent with U.S. values, how often they socialized with non-Muslim groups, how Islamophobia has affected their mental well-being and if they’ve ever tried to hide their religious identity. Nearly 75% of the participants believe women are more at risk of experiencing Islamophobia, according to the report. The survey found 60.6% of respondents believe Islamophobia to be a “very big problem in the U.S.”

More than two-thirds who participated in the survey (67.5%) have personally experienced Islamophobia, and women (76.7%) were more likely than men (58.6%) to have had a personal encounter with Islamophobia. Nearly all respondents (93.7%) said Islamophobia affects their emotional and mental well-being, according to the report.

“This may suggest that even if a Muslim is not directly targeted by an Islamophobic act, the ubiquity of Islamophobia in our media and culture after 9/11 has created an atmosphere in which Muslims feel they are being monitored, judged, or excluded in some form,” Elsadig Elsheikh, the director of the Institute’s Global Justice program, said in a statement.

The survey found that more than 32.9% of participants at some point in their lives have hid or tried to hide their religious identity, with 88.2% saying they censor their speech or actions due to fear of how people might react. Younger people, ages 18-29 (44.6%), were more likely than any other age group to have attempted to conceal their religious identity. 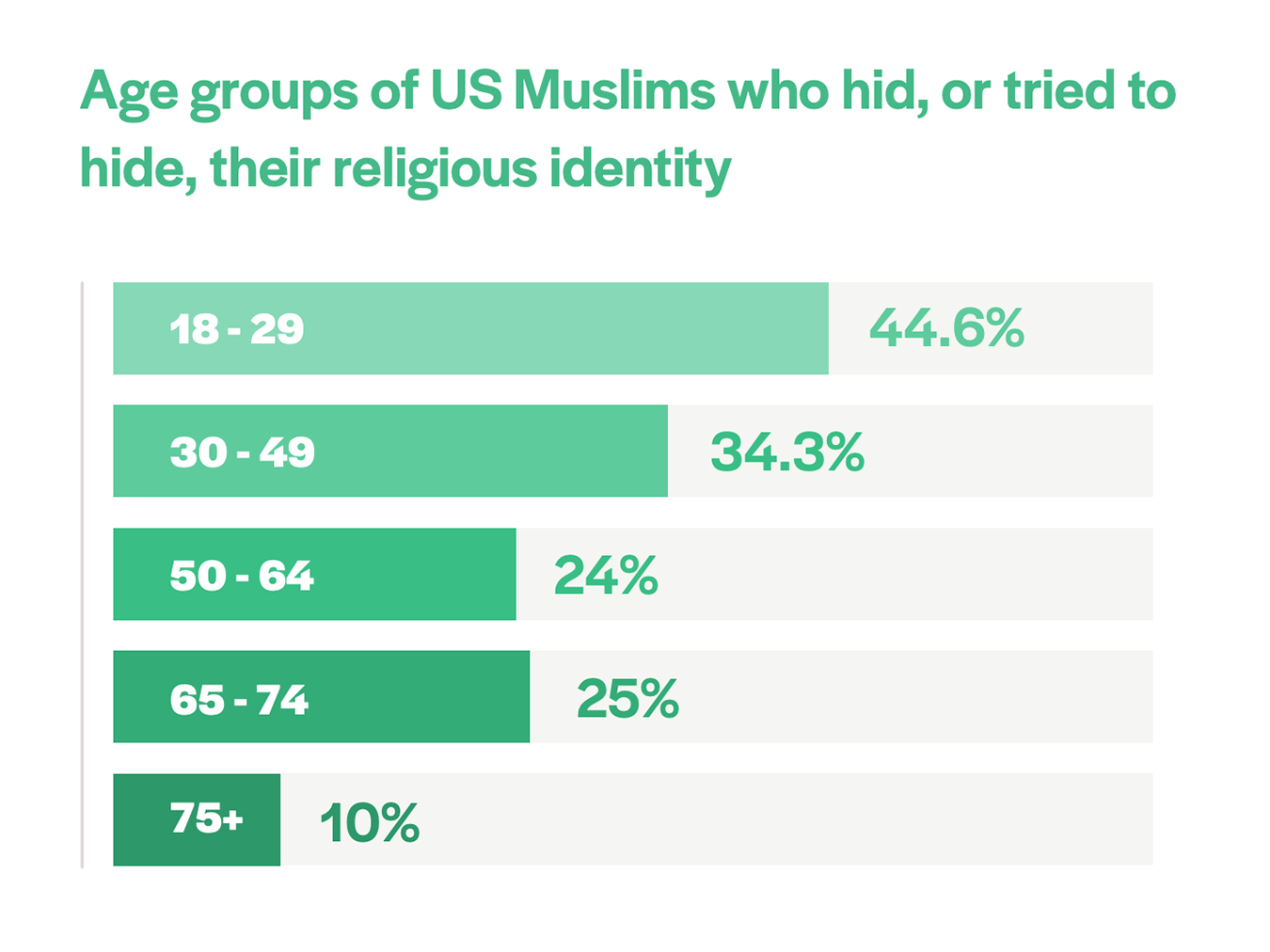 “Age groups of US Muslims who hid, or tried to hide, their religious identity” Graphic courtesy Othering & Belonging Institute

Meanwhile, most respondents (79.4%) agreed Islamic values were consistent with U.S. values. Nearly all participants (99.1%) agreed — with 91.9% strongly agreeing — it is a good thing that U.S. society is made up of people from different cultures.

To Sisemore, one of the report’s authors, it’s important to quantify the impacts of Islamophobia, especially since nearly all participants (97.8%) said they believe Islamophobia exists in the U.S.

“That’s significant,” Sisemore said. “It exists and it’s an issue.”

As part of the survey, 62.7% of respondents said they personally, or family members, friends or people in their community, have been affected by federal and/or state policies that disproportionately discriminate against Muslims. Only 12.5% of participants have reported
an incident to authorities, according to the report.

And, more than half (53.3%) said they have been treated unfairly by a law enforcement officer because of their religious identity. Despite this, many (85.6%) feel comfortable calling law enforcement for help or protection.

Sisemore said these findings “spotlight the impacts of institutionalized Islamophobia.”

In an online panel on Wednesday, Sisemore said it was also important to highlight the study’s positive findings.

Many Muslim Americans, she said, believe and support diversity in the U.S. She highlighted the study’s findings showing that nearly all participants (99%) agreed that all races and ethnicities of people should be treated equally.

More than half of respondents (52%) identify themselves in everyday encounters as Muslim American, Sisemore said. “It goes to speak to the sense of belonging that Muslim Americans feel and have in being in the United States.”

“They have a strong desire for their children to have a sense of belonging and to feel part of U.S. society and that they have a place here,” she said.