(RNS) — The Women’s March is reuniting across the nation, and this time Jewish women will be at the forefront.

The Oct. 2 Rally for Abortion Justice will meet at Freedom Plaza in Washington, D.C., and in some 600 cities across the nation, where “sister marches” are planned.

The rally comes a month after a Texas law severely restricting abortion went into effect, and a week after the U.S. House passed the Women’s Health Protection Act, which safeguards abortion access from state-level bans and restrictions.

The National Council of Jewish Women advocated for the bill, which is unlikely to find enough support in the U.S. Senate. Some 20 council chapters are expected to join the march on Saturday, which is also the Jewish Sabbath.

“This is spiritual,” said Sheila Katz, CEO of the National Council of Jewish Women. “I’m excited to be rallying for abortion justice on Shabbat. It feels connected.”

The council will host a special Shabbat morning service at the site of the Washington march, on the corner of 13th St NW and Pennsylvania Ave NW. 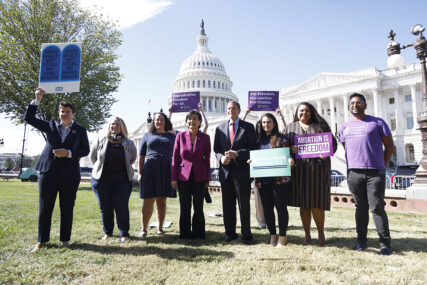 A group of political leaders and activists join together at an event outside of the U.S Capitol Building on September 29, 2021 in Washington, D.C. (Photo by Paul Morigi/Getty Images for MoveOn)

Most Jews agree abortion is permitted in Judaism and sometimes required if the health of a mother is at stake.

Katz said for many Jews abortion is a religious freedom issue.

“We do this work because of our religion not in spite of it,” Katz said. “We don’t want one faith perspective forced on everyone.”

Jewish groups won’t be the only ones marching. Auburn Seminary is organizing a faith tent at the capital that will include other faith groups, including Catholics for Choice, Religious Coalition for Reproductive Choice and Planned Parenthood Clergy.

The abortion rights march comes two days before the U.S. Supreme Court reconvenes on Oct. 4. Although the court declined to block the Texas law, it agreed to hear a challenge to Mississippi’s ban on most abortions after 15 weeks of pregnancy.

Many fear the conservative-dominated court will roll back the 1973 ruling that women have a constitutional right to abortion.

Two of those leaders, Tamika Mallory and Linda Sarsour, have since stepped down.