(RNS) — The pastor of a New York church that has halted in-person meetings since the coronavirus pandemic hit last year predicts the predominantly Black congregation won’t gather inside its sanctuary until the start of next year.

A Pennsylvania minister is counting on warm fall weather to allow some of her congregants to meet for worship outside in October, as it did two Sundays in September.

And a Virginia megachurch leader has twice met with his congregants at Maryland outdoor venues — usually reserved for concerts and football games — but doubts regular in-person worship will happen before December.

While many congregations have been back to worship for weeks and months, often masked and socially distant, some African American clergy continue to hold off on in-person services. Others have found that when they do open, most members continue to watch the livestreamed services from home.

“Every church has to make a decision on where they believe the line of safety is,” said the Rev. Howard-John Wesley of Alexandria, Virginia. “And in our mind, one member contracting COVID on the grounds of Alfred Street would be more than we believe glorifies God.” 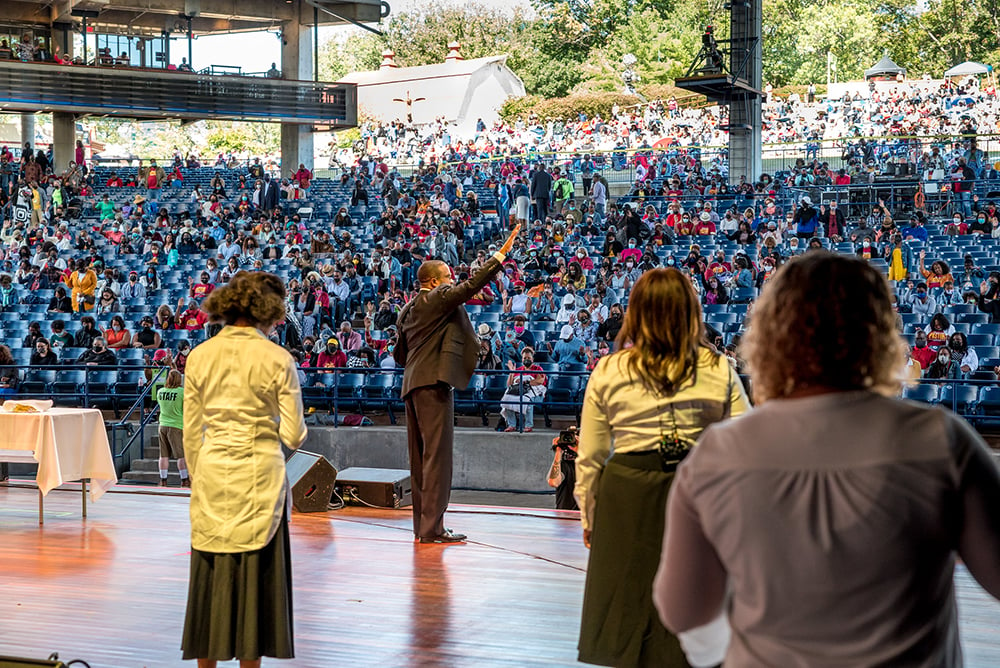 Alfred Street Baptist Church has faced two realities during the pandemic: Virtual services are successfully attracting members, and people are continuing to die from the coronavirus, including a variant Wesley said recently took the life of a 39-year-old church member.

Wesley said his church is erring on the side of caution — and many of his colleagues are coming to the same conclusions.

“We compare that to the imagery you see of evangelical white conservative Christians that have their churches back open and are erring on the side of ‘faith,’ and that God will protect us,” Wesley said. “I think you have just a different perspective within African Americans.” 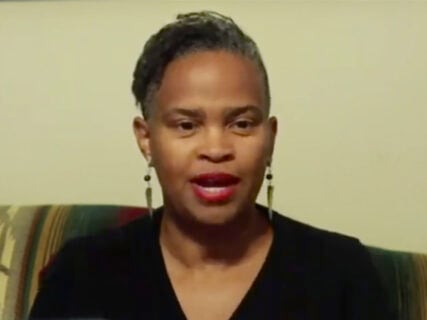 The Rev. Leslie Callahan’s St. Paul’s Baptist Church in Philadelphia capped attendance at its two outdoor September services, announcing a maximum of 75 mask-wearing worshippers. She said about 35 attended one service and 50 were at the other, while fellow members watched online.

The U.S. Centers for Disease Control and Prevention reported in early September that Black Americans are twice as likely to die from COVID-19 as white Americans, a finding that was also reported by the National Urban League in its 2020 “State of Black America” report.

Those kinds of statistics — and the emergence of new virus variants — contribute to the cautious approach on the part of some ministers, their reopening task forces and the people they have surveyed who are currently not in the pews.

“I wanted to open in September, and I met with our people and they weren’t ready to come back,” said the Rev. W. Franklyn Richardson, pastor of Grace Baptist Church in Mount Vernon, New York, noting questions about the need for a booster shot added to the already mounting concerns about variants. He stopped considering a November opening and pushed plans back two more months.

Richardson, who also is the chair of the Conference of National Black Churches, said he’s aware of larger churches that are not planning to open until the start of 2021. And while some churches have seen increasing numbers of attendees online, other churches in the seven CNBC-affiliated denominations have had to close because their leaders did not have the finances or the skillsets to pivot to the new technology needed to survive.

Richardson said smaller churches that are continuing to offer services online find that when they do open for in-person worship, they get substantial attendance initially, followed by a steep decline. He said he is not aware of any Black church that has more than 40 percent of its pre-pandemic in-person attendance.

“The issue is that, yes, you can open the church, but if the atmosphere, the climate, is not conducive for people to come back, you just open the door and they won’t be there.”

Earlier this year the hesitancy of African Americans to return to worship — especially when they could keep watching and giving online — was evident in some pandemic-related research. 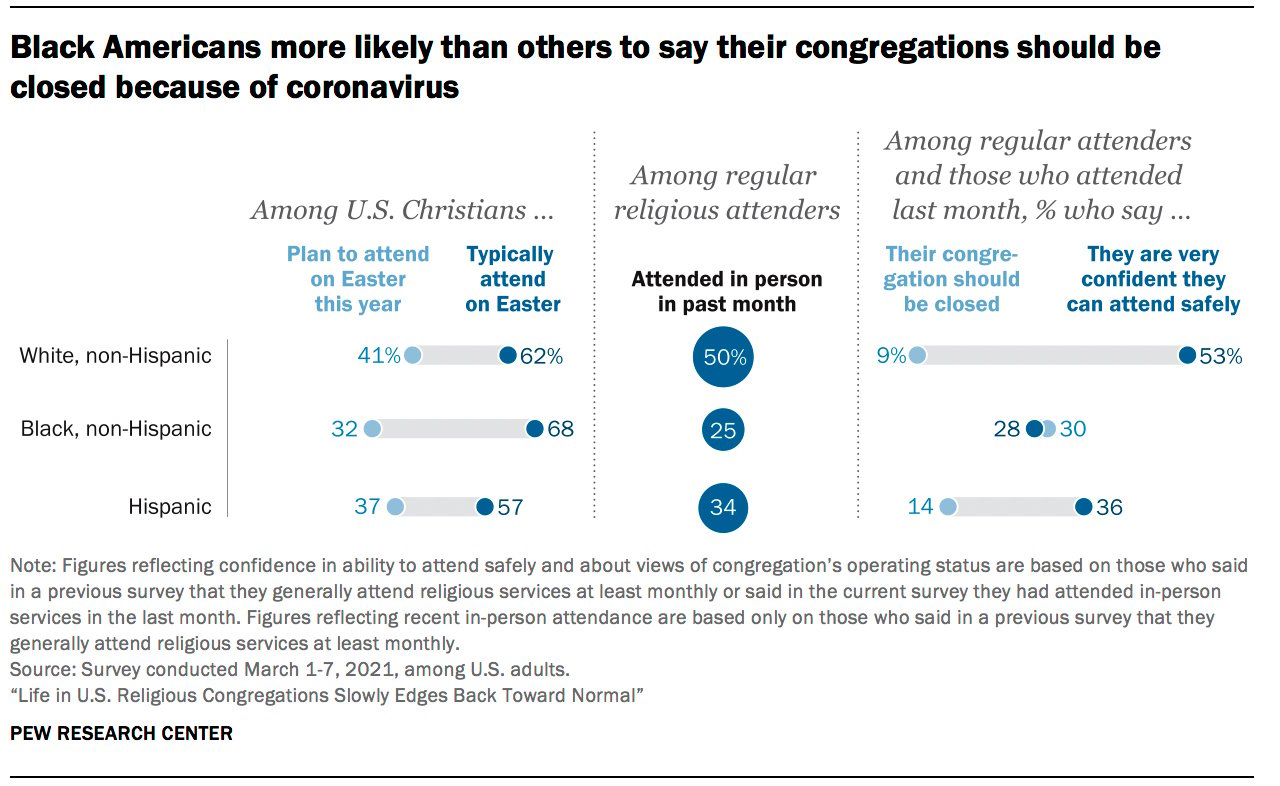 The Pew Research Center observed the slow return to in-person worship among historically Black Protestant congregations in a March survey, its most recent data available on the topic.

More than a quarter (28%) of Black people who regularly attend services said their congregations should be closed due to the pandemic, compared to 9% of white people and 14% of Hispanic Americans. Similarly, fewer African American congregants (30%) said they were “very confident they can attend safely,” compared to 36% of Hispanic attendees and 53% of white attendees.

Asked about any continuing racial divide among megachurches and smaller congregations, sociologist of religion Scott Thumma said, “My sense is that there is greater hesitancy among mostly mainline churches, as well as Black and Latino churches that have been disproportionately impacted by the virus and have had less access to vaccines.”

Thumma, whose Hartford Institute for Religion Research recently received a $5 million grant to study COVID-19 and its effect on congregations, said most African American megachurches he has researched have started meeting in person while also holding online worship services. But some smaller congregations in his area of Connecticut have not started in-person gatherings. 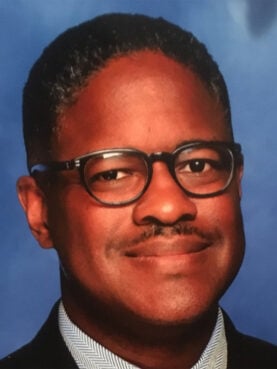 The Rev. Kip Banks, pastor of a Washington, D.C., church and a senior consultant for Values Partnership who works with Black pastors across the country, said his church, which returned to offering in-person services in September, has about 200 active members, with about 70 attending online each week and about 40 to 50 in person.

“Even for those that have gone to hybrid format, the majority of worshippers are still online, and you find that across the board,” said Banks, pastor of East Washington Heights Baptist Church. “The church has to make a major adjustment to online worship. It’s with us to stay.”

Though some Black churches are shuttered for in-person worship, they have often continued other rituals and traditions beyond Sunday morning. Wesley said he has officiated at about a dozen weddings since the pandemic started, in locations such as museums and art districts, though most have been postponed. And he said his church has conducted a few funerals, requiring families to determine which 50 people can attend the service — and there’s a “different kind of feel” with required mask-wearing and social distancing. Wakes are held in the narthex, just inside the doors of the church, instead of in the sanctuary.

“We only allow one family in at a time while we do that,” he said.

Richardson said his church, at the height of the pandemic, was giving away food to 500 families a week and still aids a few hundred each Wednesday, having turned a building on its property into a storage and distribution facility.

“The African American churches have been centers for distribution of food, vaccinations and testing,” he said. Even at a time when they haven’t been able to be open for worship services, “they’ve become real centers of service in the community.”