(RNS) — Religions for Peace, the international interfaith conference, began Monday (Oct. 4), in a new hybrid format after a relatively low-key virtual meeting last year due to the coronavirus  pandemic.

Most of the event’s 1,500 participants are watching from home this year, as some 125 faith leaders from at least 16 countries come together in person to discuss religion’s role in solving some of the world’s biggest problems, including climate change, the conflict in Afghanistan, migration and the pandemic itself.

Those key issues are set to be addressed in specific panels and closed-door dialogues in the following days.

But the four-day meeting — officially called the Religions for Peace Conference of the World Council of Religious Leaders on Faith and Diplomacy — began with a strong push for confronting the problem of vaccine hesitancy as countries fight to curb the spread of the coronavirus pandemic.

RELATED: Religion can be a healing balm for COVID-19’s disruption, if applied judiciously

In a pledge made Monday, religious leaders vowed to “lead in global advocacy for vaccine equality and effective global response to pandemics based upon science. Not in our name should any leader urge against a vaccine that is scientifically proven to help save lives.”

In some parts of the world, particularly in the United States, many evangelical churches oppose vaccine use.

There was a sense of having to catch up on business delayed by the pandemic.

In the first major order of business at this year’s conference, the organization’s leadership issued a “Global Pledge by the World’s Religious Leaders.” The document revisits pledges made in the last in-person meeting in 2019, as well as from last year’s entirely virtual gathering.

In this year’s pledge, religious leaders addressed climate change, saying they were committed to “a sustainable environment for all living species” and to leverage “the moral authority of (their) faiths to protect the world’s natural resources.”

Addressing armed conflict, the leaders said their “strength is proportionate to how we advance the peace between and amongst each of us and our believers,” while they also committed to “welcoming refugees, stateless and internally displaced people,” adding that no nation should close its borders to those forcibly displaced from their homes for any reason.

The hybrid meeting is a far cry from previous years’ bustling, cosmopolitan crowd. In 2019, there were more than 1,000 in-person participants from about 125 countries at the 10th edition of the Religions for Peace assembly.

But in an opening press conference, the meeting began with notes of optimism. 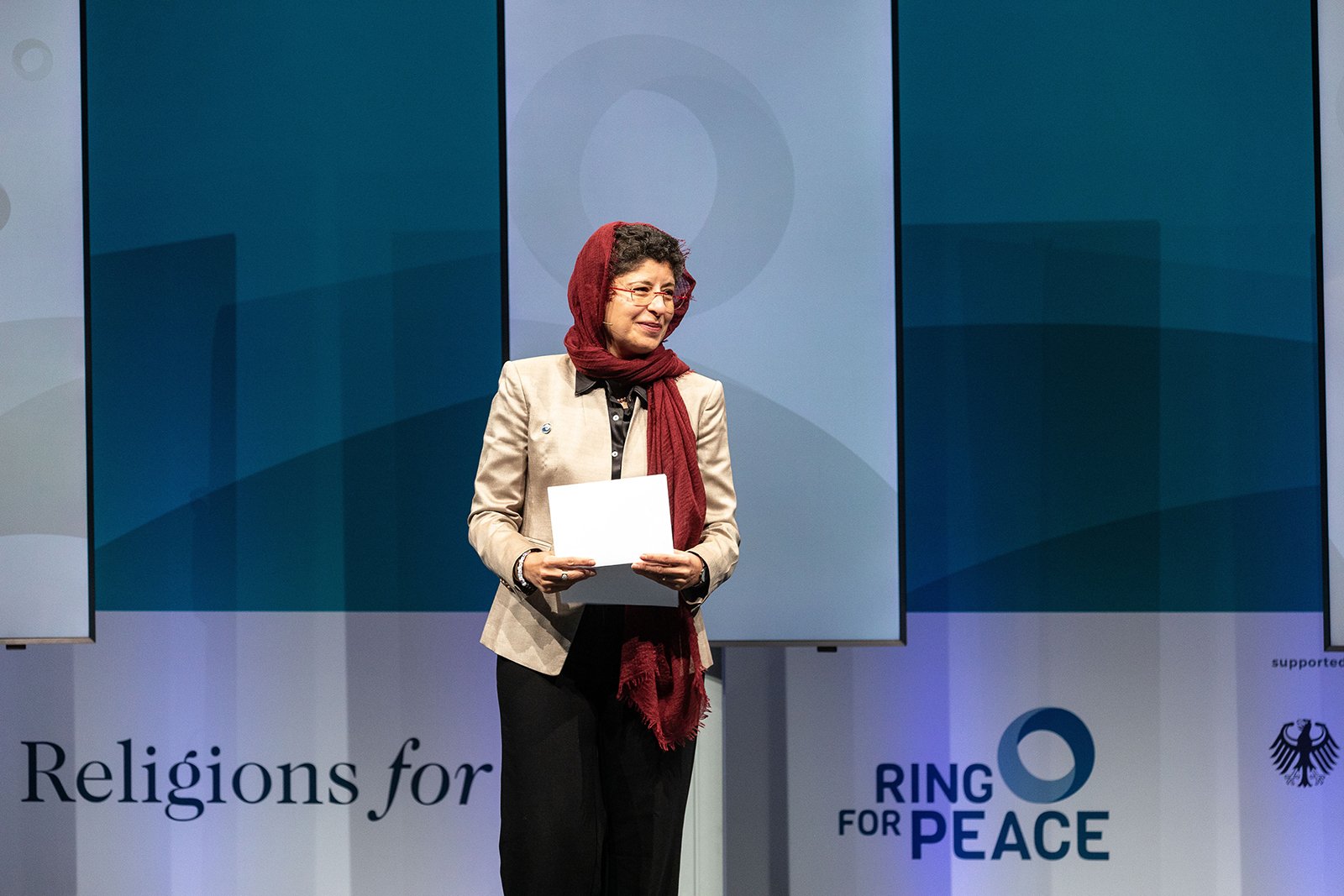 Religions for Peace Secretary-General Azza Karam said that despite the limits of the hybrid format, the value of the event was intact. She said the discussions this week in Lindau would “put forward new arguments, realities and stories about the work of religious peacemaking” and that it would help develop “a new comprehensive manner to integrate the views of multiple faith leaders (and) create new forms of diplomacy.”

Rabbi David Rosen said this year’s conference was part of “a new era in which religions work together to confront the problems in the headlines.”

“I am convinced this is so,” Kässmann said. “That is why what we are doing is so important.”