VATICAN CITY (RNS) — Scientists and religious leaders from all over the world, including Pope Francis, gathered at the Vatican on Monday to present a joint appeal affirming their commitment to protecting the environment and to bridging the divide between faith and science.

“We plead with the international community, gathered at COP26, to take speedy, responsible and shared action to safeguard, restore and heal our wounded humanity and the home entrusted to our stewardship,” a summary of the appeal shared during the event (Oct. 4) reads.

The document, signed by about 40 religious leaders and scientists, was handed to Alok Kumar Sharma, president of the COP26 summit. The summit will gather political leaders from all over the world in Glasgow, Scotland, in November to discuss and reinforce their commitment to protecting the environment.

“COP26 in Glasgow represents an urgent summons to provide effective responses to the unprecedented ecological crisis and the crisis of values that we are presently experiencing, and in this way to offer concrete hope to future generations,” the pope said in his address on Monday.

Religious leaders and experts have been in communication for months to discuss their “concerns and support toward a greater commitment for the planet,” as well as the change that is necessary to make it happen, the Vatican announced.

The UK and Italian embassies to the Holy See promoted the event, titled “Faith and Science: toward Cop26,” since both countries will coordinate the summit on the environment in November.

The faith leaders identified a “crisis of values, ethical and spiritual” that accompanies the current climate emergency. The appeal spoke of the vocation and responsibility of everyone to care for the planet and to use “the knowledge of science and the wisdom of religion.”

Coming on the heels of the Youth4Action summit of young climate activists in Milan, Italy — where climate activist Greta Thunberg decried the “blah, blah, blah” of adults when it comes to protecting the environment — the interreligious joint appeal focused on action.

“The world is called to achieve net-zero carbon emissions as soon as possible,” the summary read, placing an emphasis on the need for wealthier nations to take the lead and help developing nations. Faith leaders urged nations to limit the increase in temperature to 1.5° C and to keep in mind the concerns of the poor and Indigenous peoples.

More than 80% of the global population holds some religious belief, according to studies conducted by the Pew Research Center, giving faith leaders a massive influence when it comes to addressing modern transnational challenges, from vaccination rates to climate change.

The joint appeal confirms the commitment of the religious representatives to promote environmental awareness among faithful and governments, in collaboration with other denominations and faith groups. It also promises that religious institutions will ensure their investments and purchases are aligned with a dedication to preserving the planet.

Representatives from The Muslim World League, the Coptic Orthodox Church and Buddhist temples signed the joint declaration. Members of the Pentecostal World Fellowship, the Lutheran World Federation and the International Jewish committee for Interreligious Consultations also took part in the interfaith initiative. 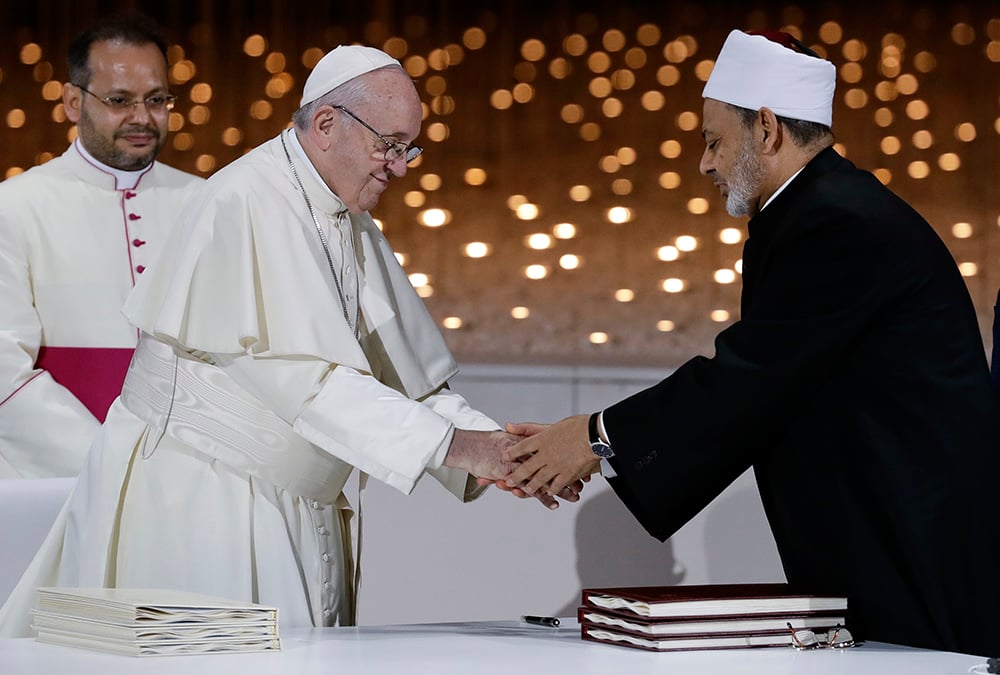 The Grand Imam of Al-Azhar, Ahmad Muhammad El-Tayyeb, with whom Pope Francis co-signed a document promoting religious tolerance and fraternity in 2019, also participated in the event, while the Metropolitan Hilarion represented the Russian Orthodox Church.

Some of the representatives could not attend the event given the current travel restrictions caused by the COVID-19 pandemic but participated via online speeches and prayer services.

In his speech, Pope Francis offered three principles that might guide religious leaders in their promotion of the environment: “openness to interdependence and sharing, the dynamism of love and the call to respect.”

The pope underlined the interconnectedness of every human being and the planet and praised the interreligious nature of the appeal, which proves that “no cultural, political or social borders or barriers prevent us from standing together.”

Caring for the environment and caring for one another are connected, the pope said, and require “a love that is inclusive,” especially toward the poor. While the climate crisis is daunting, “humanity has never possessed as many means for achieving this goal as it possesses today,” Francis said, emphasizing the importance of education.

Seeking to overcome the dichotomy that has often pitted faith against science, Pope Francis called for “mutual respect” through dialogue.

After the ceremony, faith leaders planted a symbolic olive tree in the Vatican gardens and then left to attend a meeting at the Italian Embassy to the Holy See where they are expected to discuss practical ways to enact the appeal and raise environmental awareness.

RELATED: Where Serra statues once stood, a chance to honor California’s Indigenous people