FILE – In this Sept. 15, 2021 file photo, first lady Jill Biden speaks during a visit to Des Moines Area Community College in Ankeny, Iowa. Jill Biden on Sunday returned to the South Carolina Baptist church where she says she began to repair her relationship with God following her son’s death from brain cancer six years ago. She quietly flew to West Columbia to speak at the 50th anniversary celebration for Pastor Charles B. Jackson Sr. of Brookland Baptist Church but ended up giving one of the most extended explanations of how her faith wavered and how she found her way back to God.(AP Photo/Charlie Neibergall)

(RNS) — First lady Jill Biden made a surprise trip to a South Carolina church on Sunday (Oct. 17) to celebrate her “prayer partner” — a woman she credits with reinvigorating her faith after they met during the 2020 presidential campaign.

The visit took place at Brookland Baptist Church, a predominantly Black church in West Columbia, as the congregation honored the Rev. Charles Jackson, the church’s pastor, for his 50 years of service to the church.

Biden praised the pastor during her visit, but according to The State newspaper, she was also there to laud her relationship with Jackson’s wife, Robin. Known as the church’s “first lady,” Robin and Biden first met in May 2019 when then-candidate Joe Biden visited Brookland while on the campaign trail.

Biden made mention of an unnamed prayer partner during the 2020 campaign but avoided naming Jackson as her spiritual companion in public interviews.

RELATED: Like Joe Biden, many Catholics find the rosary to be a comfort and anchor in crisis

Even so, she has tweeted about Jackson in the past, and the pastor’s wife participated in President Biden’s inaugural prayer service in January. 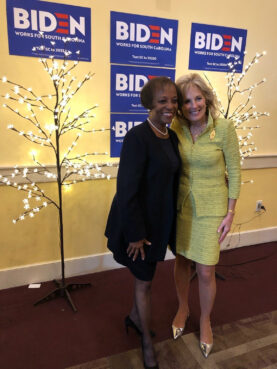 “Merciful God, fill our hearts with your self-giving love, that our voices may speak your praise,” Jackson said in her inaugural service prayer. “As you have moved toward us in love, so lead us to be present with all your people that we may faithfully minister in your name, and witness to your love and grace to all the world. Amen.”

Jill Biden made their connection clear on Sunday, when her mention of Jackson sparked cheers from the congregation.

In a roughly 10-minute address, Jill Biden explained that after her stepson, Beau, died in 2015, her attendance at church dropped off. “I felt betrayed, broken,” she said, visibly emotional as she recounted Beau’s death. She lamented that while her pastor invited her back to church, “I just couldn’t go. I couldn’t even pray. I wondered if I would ever feel joy again.”

Then, Biden explained, Robin Jackson approached her during the campaign stop at Brookland. The church’s first lady offered to be the first lady-to-be’s “prayer partner.” Biden agreed, and Jackson began texting her prayers weekly, an act of shared devotion that Biden said reawakened her faith.

“Robin’s kindness, her mercy and grace, pushed past the calluses on my heart, and like the mustard seed, my faith was able to grow once again,” Biden said.

RELATED: That’s Dr. Biden to you!

Biden said of her first conversation with Jackson: “When she spoke, it was as if God was saying to me: ‘Okay Jill, you’ve had enough time. It’s time to come home.’”

After citing a passage from the Biblical book of Hebrews, Biden said: “We can’t heal ourselves alone, but with God, all things are possible.”

“This church changed my life,” she added, sparking another round of applause.