(RNS) — After a series of health crises and the loss of her father, religion professor Arlene Sanchez-Walsh found herself in need of prayer.

So she downloaded what she called “a modern, millennial Catholic app” for her smartphone, thinking it might help.

What she needed was a ritual that was tangible and connected to the past, both of the Catholic church and her own Mexican Catholic family. So she started praying the rosary, just as her great-grandmother had.

“I needed something because my life was going off the rails a bit, and I needed to find something to temper the chaos,” Sanchez-Walsh said. “The rhythms of prayer brought me great relief.”

Long a staple of Catholic life, the rosary is back in the spotlight with the election of Joe Biden, who will become the nation’s second Catholic president when he is inaugurated in January. The president-elect often carries a set of rosary beads with him that once belonged to his son Beau, who died in 2015.

“It’s my connection with him,” Biden told the Today Show in the fall of 2017. Democratic presidential candidate former Vice President Joe Biden, center, is gifted a rosary by Minerva Munguia-Sanchez, right, a principal at St. Alphonsus School, and shows the rosary beads that he wears on his wrist, during a visit to Tamales Liliana’s in East Los Angeles, Friday, July 19, 2019. (AP Photo/Damian Dovarganes)

Thomas Groome, professor of theology and religious education at Boston College, said that in the midst of a pandemic — when many churches can’t gather in person and much of religious practice has gone online — the rosary can be a concrete sign of faith.

“Faith is really a way of life that needs to be more concrete,” said Groome, co-author of Catholic Spiritual Practices: Treasures Old and New, which includes a chapter on praying the rosary.

“The rosary is one of the ways we take it out of our heads and put it into our lives.”

According to a guide from the U.S. Conference of Catholic Bishops, the rosary is a “Scripture-based prayer” that begins with the sign of the cross, followed by the Apostles’ Creed and the Lord’s Prayer (also known as the “Our Father”), the Glory Be and repeated Hail Mary prayers and meditations on a series of “mysteries” — joyful, luminous, sorrowful, glorious —  taken from the life of Jesus in the gospels and Catholic teaching.

People praying the rosary will focus on a different mystery each day of the week, on a set schedule. The beads act as a kind of guide or roadmap to help people keep their place.

“The repetition in the Rosary is meant to lead one into restful and contemplative prayer related to each Mystery,” according to the USCCB guide. “The gentle repetition of the words helps us to enter into the silence of our hearts, where Christ’s spirit dwells. The Rosary can be said privately or with a group.”

Groome said the luminous mysteries are a fairly recent addition, introduced by Pope John Paul II to add more focus on the life and words of Jesus.

They help Catholics focus on the teaching of Jesus, he said, especially in the commandments to love your neighbor and the proclamation of good news to the poor — and reminding them of the need to put that teaching into practice.

For Alexandra Zermeno, a 33-year-old schoolteacher in suburban Chicago, the rosary has been a way to get her prayer life back on track. Zermeno, who has five kids under the age of six, said that between work and family life, it’s hard to find time to pray. 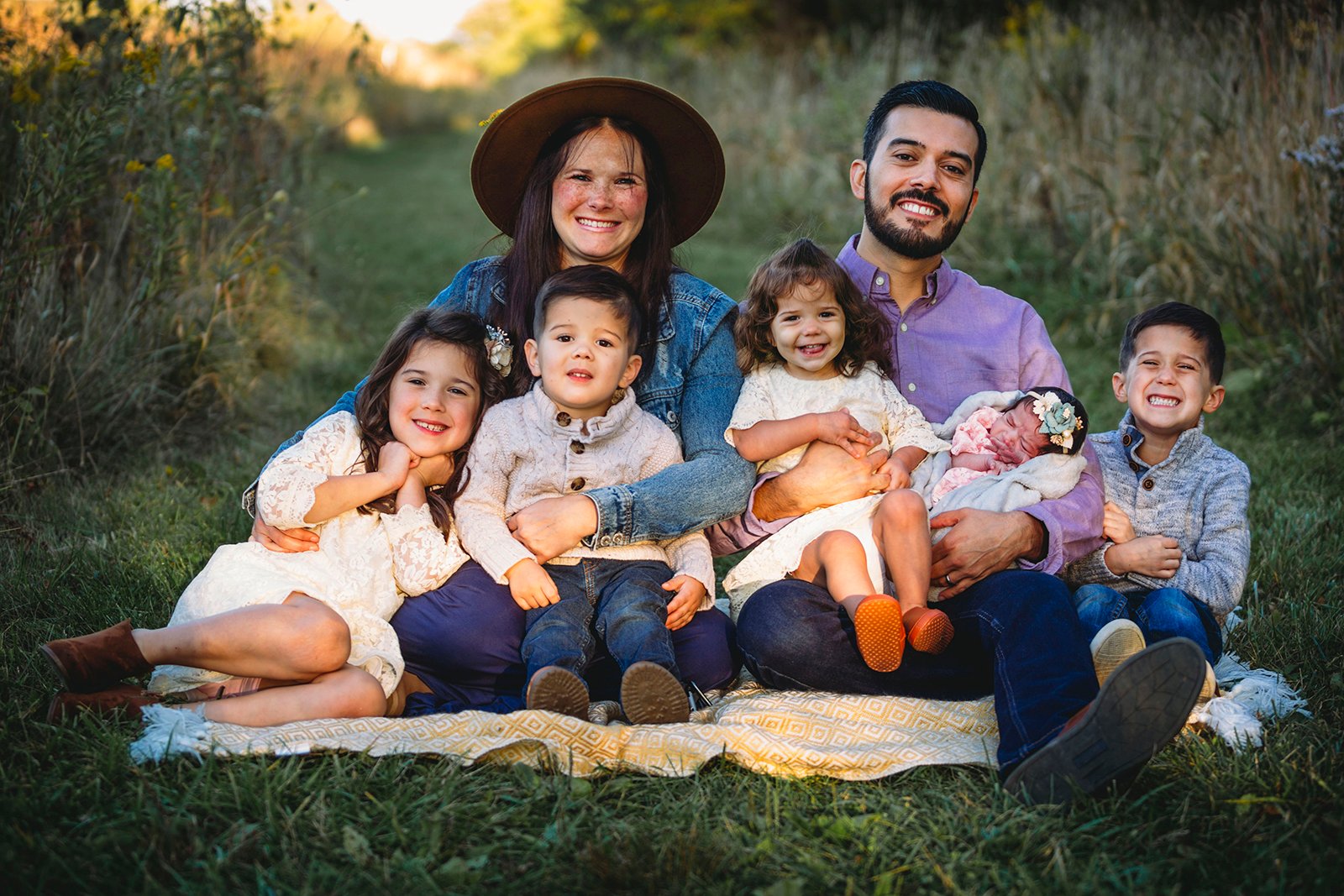 The Zermeno family in Fall 2020. Courtesy photo by Scard Photography

She’d say a prayer if something came to mind during the middle of the day or start to pray at night, only to fall asleep, but found that approach to prayer unsatisfying.

So this fall, she began to pray the rosary on a regular basis.

“I want to be more intentional with my prayers,” she said. “And I love Mary, and I really love the rosary, and I really want to get to know Jesus on a more personal level and develop a friendship with him. And I think through Mary is one of the best ways you can do that.”

She has also begun posting about prayer on Instagram and asking people if she can pray for them. That helps keep her motivated, she said, because she doesn’t want to let down the people she promised to pray for.

“I just keep kind of like a running tally of who I’m praying for,” she said. “And I want to pray the rosary even more because I also want to pray for those people.”

Tom Vogel of Spring Hill, Tennessee, also uses the rosary as a way to pray for other people. He also finds it a source of hope at a very trying time in American culture.

Vogel said he learned to say the rosary as a kid going to Catholic school and never lost the habit. At first, he admitted, he prayed it when he was in trouble or when his grades needed a boost. Eventually, it became something much deeper.

The 77-year-old said he believes prayer can help heal rifts between neighbors. He said the country needs more of that and less arguing and controversy.

“I love the rosary,” he said. “To me, it is the only salvation left for the world in this crazy time we live in.” 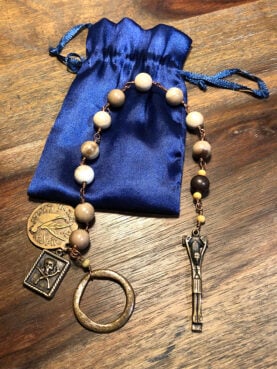 The Rev. Tyler Wigg-Stevenson, an Anglican priest and scholar-in-residence at Little Trinity Church in Toronto, said praying the rosary helps bring a sense of order and discipline to his prayer life.

Wigg-Stevenson said he grew up in a “post-Christian family,” with no religious identity whatsoever. He had a conversion experience after college and ended up visiting the website for the Monastery of Christ in the Desert, where he got his first rosary. He realized he needed some tangible tools to help his faith grow and develop and thought the rosary could do that, even though he was not Catholic.

He eventually ended up making rosaries of his own for friends, including the standard five-decade Catholic rosaries, some Anglican rosaries, as well as some Orthodox rosaries with a series of tied knots, which are used to say the Jesus Prayer.

Wigg-Stevenson said a rosary makes it easy for him to set aside time for prayer without using a smartphone app or other kind of timer. And it helps him continue to pray, even if he doesn’t feel like it.

“I know I am not going to cut any corners,” he said.

Sanchez-Walsh said for her, the rhythms of the rosary have been more meaningful than other expressions of faith, like going to Mass. The practice has also been a way to reconnect with her family roots. She said her great grandmother wasn’t able to go to Mass toward the end of her life because of her health. But she would still sit outside and pray the rosary, and that brought her comfort.

During her struggles, Sanchez-Walsh said praying the sorrowful mysteries — which recount the sufferings of Jesus from the Garden of Gethsemane to the crucifixion — has been particularly meaningful. They are reminders that though there is sorrow and suffering in life, God is still present.

She thinks that may be another reason why the rosary is so important to President-elect Biden, whose first wife and infant daughter died in a car crash just before Christmas in 1972, followed four decades later by his son’s death.

“You pray the sorrowful mysteries twice a week,” Sanchez-Walsh said. “You have to remind yourself that there’s just sorrow in this life and that God cares for you, regardless.”