BAZOULE, Burkina Faso (RNS) — The small live chicken, offered as a lure to get the crocodile to come out of the lake, barely convinced the massive male reptile to the water’s edge. The croc, himself the lure for the sprinkling of visitors who had come 20 miles from the capital, Ouagadougou, to pose with the beings held sacred by locals, seemed disinterested in tourists and chicken alike.

“We used to have large groups coming and students. That has slowed a lot in the last couple of years,” said Pierre Kaboré, president of the Association for Tourism and Development of Bazoule and the head of a local association of 15 crocodile caretakers.

A recent visit confirmed that there were more crocodiles lounging on the shore of the holy lake than cars in the parking lot. With an uprising in Burkina Faso’s north and the travel disruptions of COVID-19, the number of tourists has slowed in this village of some 2,000 people and 100 or more fully adult crocodiles, with another 100 still maturing.

The local cult of the crocodile dates to sometime in the 1500s, when, during a period of severe drought, locals believe, a crocodile appeared and led local women to a source of fresh water. A thanksgiving was held by the grateful villagers and the reptiles have been revered ever since. It is common to find crocodiles in the compounds of local families in the dry season, which runs from November to April. At other times crocodiles wander into the village seeking safe places to lay their eggs, and the locals protect the nests from predators.

West African crocodiles are generally less aggressive than their counterparts on the Nile, and the villagers and tourists pet them and large cattle from the village drink from the lake without fear.

Most of the crocodiles subsist on fish, birds and other small game, but a handful are selectively groomed to chase chickens for tourists. The locals collect the teeth of the crocodiles, who shed them often, to make into amulets, earrings and other jewelry.

“The local boys swim in the lake despite the crocodiles, and I did it too,” said Kaboré. “We know not to swim, though, too soon after the babies hatch — the mothers are very protective.” 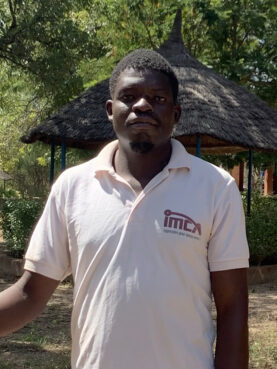 But the crocodile cult goes beyond the commercial advantages: Their potentially valuable crocodile skin is not harvested for leather and the carcasses are buried intact in a small, unmarked cemetery in a quiet grove dedicated to crocodiles that is barred to tourists. Dead crocodiles receive burial services similar to those of humans in the village and are often buried in coffins.

At the center of the faith practice of the people of Bazoule are the large male crocodiles known as the “old man of the lake.” The current holder of this esteemed position is believed to be 110 years old and thus has lived through the entire arc of Burkina Faso’s modern history: From the brutal colonial war raged by France to control “Upper Volta” during World War I to the rise and assassination in 1987 of rebel leader Thomas Sankara, who gave the country its name, which combines several Indigenous languages.

The previous old man of the lake, who died more than a decade ago, had lived even longer. “He was about 136, which is quite old for a male, but some females here potentially live up to 150 years,” said Kaboré.

RELATED: Why the label ‘cult’ gets in the way of understanding new religions

In an annual ceremony known as Koom Lakre, offerings are made to the old man of the lake by a village elder. While chickens are sufficient for the entertainment of visitors, the old man is propitiated with sheep, goats and occasionally small donkeys.

Crocodiles’ cries heard by villagers are treated as omens that are interpreted by elders. Yet, there are increasingly fewer ears to hear those cries. “We used to have over 100 people on the weekends coming here to see the crocodiles. Now it’s just a few cars a day,” said Alfred Kaboré, another crocodile caretaker. A small compound with a café and benches shaped like crocodiles sits empty.

Locals once keen on the tourist trade have refocused on the vegetable gardening for which the village is also known.

“There will always be a connection between us and the crocodiles. Even if someone leaves the village or shows interest in another religion, they still venerate the crocodiles as (a) god. Respect — this is the animist way,” said Alfred Kabore. 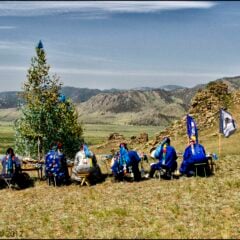 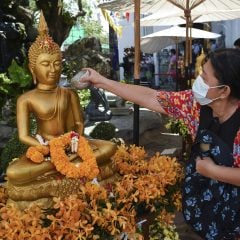 Religion Hub
The pandemic has slowed tourism to Thailand’s Buddhist temples, but the impact is more than economic