VATICAN CITY (RNS) — On Friday (Oct. 29), Pope Francis is set to hold a highly anticipated private audience with President Joe Biden at the Vatican. It will be the first in-person meeting between the pontiff and the Catholic head of state since Biden’s election.

Biden is the 14th U.S. president to meet a pontiff at the Vatican, and the Eternal City is bubbling with speculation over what the two are likely to discuss. The meeting is expected to be cordial, focusing on what the two have in common, but historically the relationship between the Vatican and the Oval Office has often been tense — even occasionally hostile.

From public reprimands to diplomatic faux pas, Religion News Service takes a look back at the history of meetings between popes and U.S. presidents.

More than a hundred years ago, on Jan. 4, 1919, President Woodrow Wilson became the first American head of state to meet with a pope at the Vatican, during a European tour in the aftermath of World War I, which had left the continent in shambles and rife with tensions.

The pontiff at the time, Pope Benedict XV, had spoken fervently against war and in 1917 wrote a letter “to the Heads of State of the Belligerent Peoples,” which outlined a plan for peace and reconstruction for Europe and beyond. In January of 1918, Wilson pronounced his 14 points for the establishment of a new postwar world. Some observers at the time suggested Wilson felt as if the frail Italian pontiff had stolen his thunder by releasing his vision first.

The first encounter between a U.S. president and a pope was also a meeting of two global visions for peace, at times opposing and sometimes aligned. The evolving contours of these visions would go on to define the relationship for a century.

Eisenhower and Pope John XXIII: ‘That was a beaut!’ 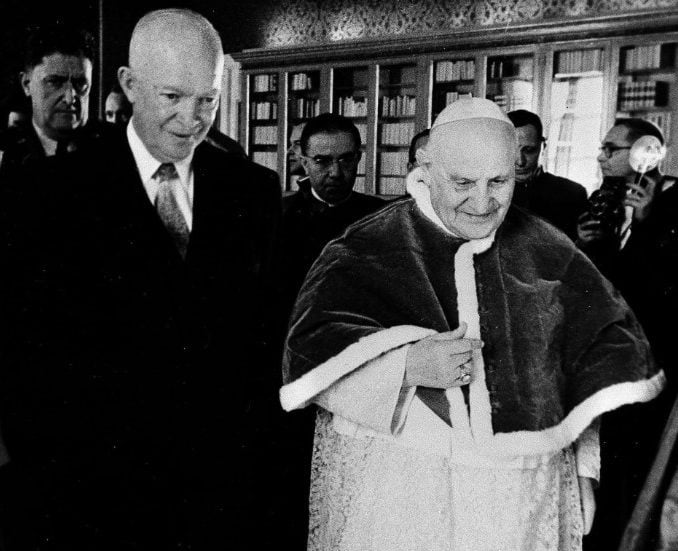 President Dwight D. Eisenhower and Pope John XXIII met at the Vatican in December 1959. John XXIII, known as “the good pope” for his affable and gregarious attitude, tried to learn a few words in English to put the president at ease. Despite his efforts, the elderly pope stumbled through his English and at the end of the speech ironically quipped “that was a beaut!” in Italian. The president, accompanied by his family, burst out laughing along with everyone present, blessing the papal annals with some rather playful pictures of the historic event. 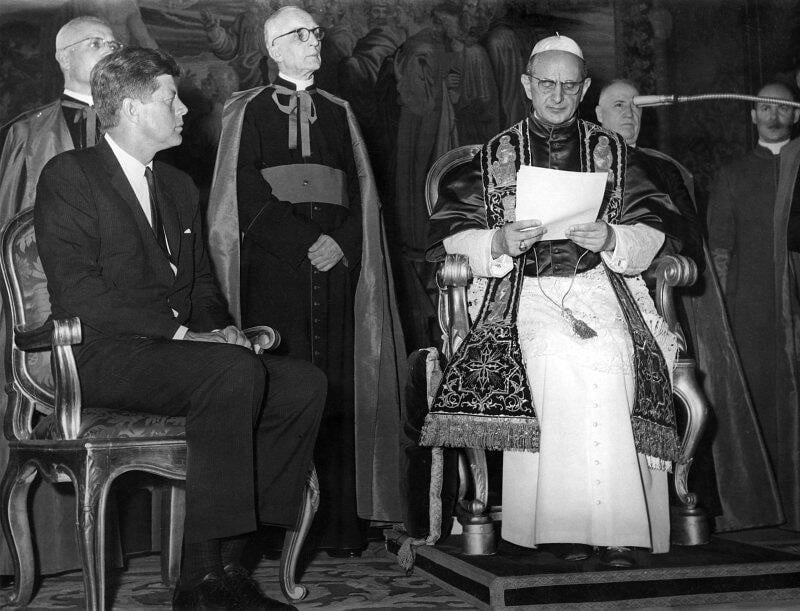 The first Catholic president, John F. Kennedy faced significant scrutiny back home for how he would handle his July 1963 meeting with Pope Paul VI. Anti-Catholic sentiment remained strong in the U.S., and even before his visit, cartoons popped up showing Kennedy bowing to the pope in Rome. The media at the time questioned whether the U.S. president would follow Catholic protocol and bow to kiss the pope’s ring.

Instead, Kennedy and Pope Paul VI exchanged a firm handshake during their meeting and spoke in English. Five months after the visit, Kennedy was fatally shot. People close to the pope said he “wept uncontrollably” at the news and later publicly condemned Kennedy’s assassination.

President Lyndon B. Johnson’s visit to the Vatican on Dec. 23, 1967, came as the Catholic Church prepared to celebrate Christmas, but according to witnesses, it was less than jolly. Paul VI made his objection to the Vietnam War heard during the meeting, with some claiming he slammed his fist on the table in anger.

Johnson made sure to leave a lasting impression — literally — gifting the pope a bronze bust of himself.

Nixon and Pope Paul VI: From amicable to acrimonious 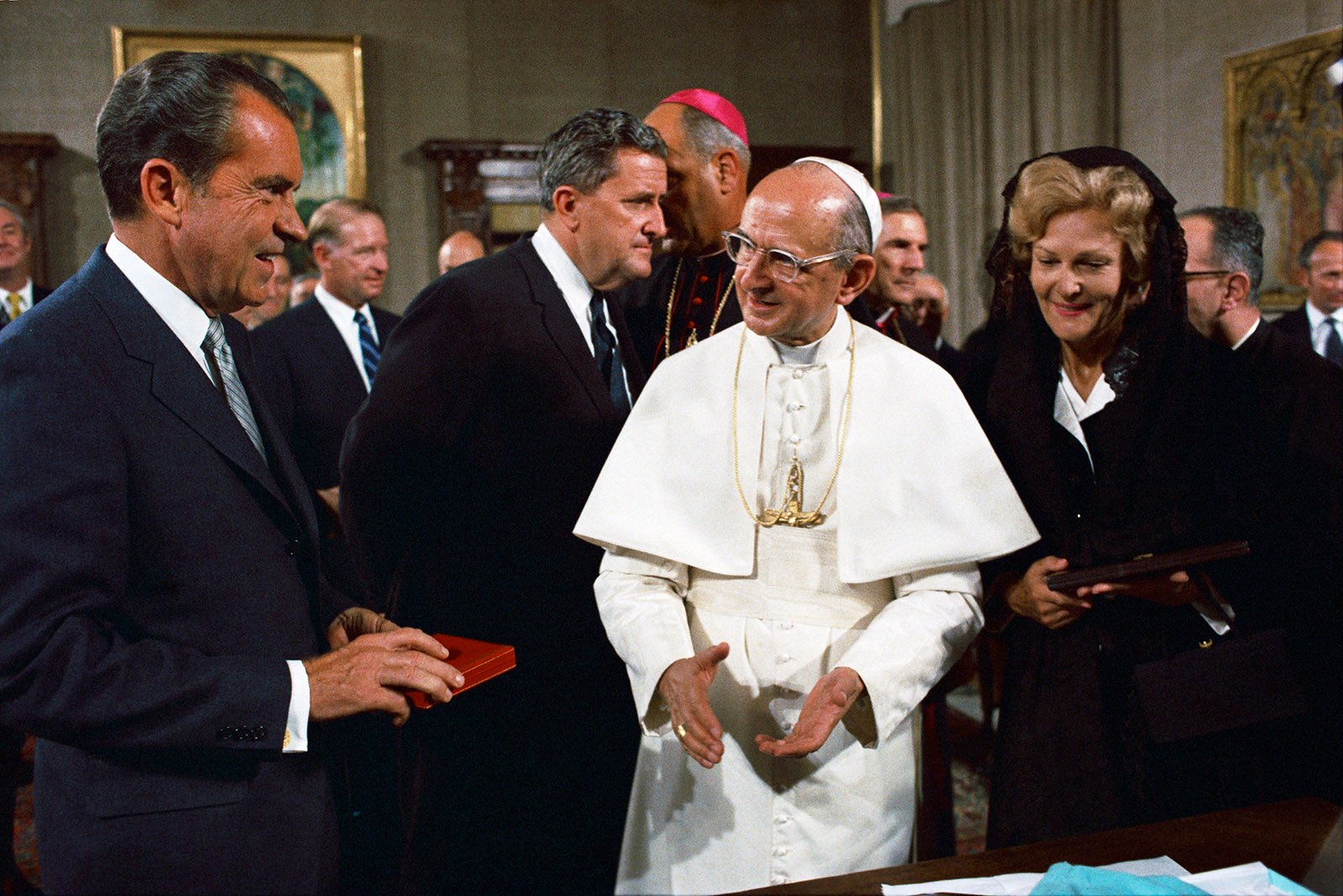 President Richard Nixon met with Pope Paul VI at the Vatican twice. The first time, in March 1969, the two discussed the ongoing war in Vietnam and the possibility for peace. Nixon praised the pope for his words, stating they were “a source of profound inspiration” and promising to make do on his peace-building efforts.

When they met again on Sept. 28, 1970, as the Vietnam War continued to escalate, the encounter was “less than pleasant, even acrimonious,” according to Peter Hebblethwaite’s biography of Pope Paul VI. 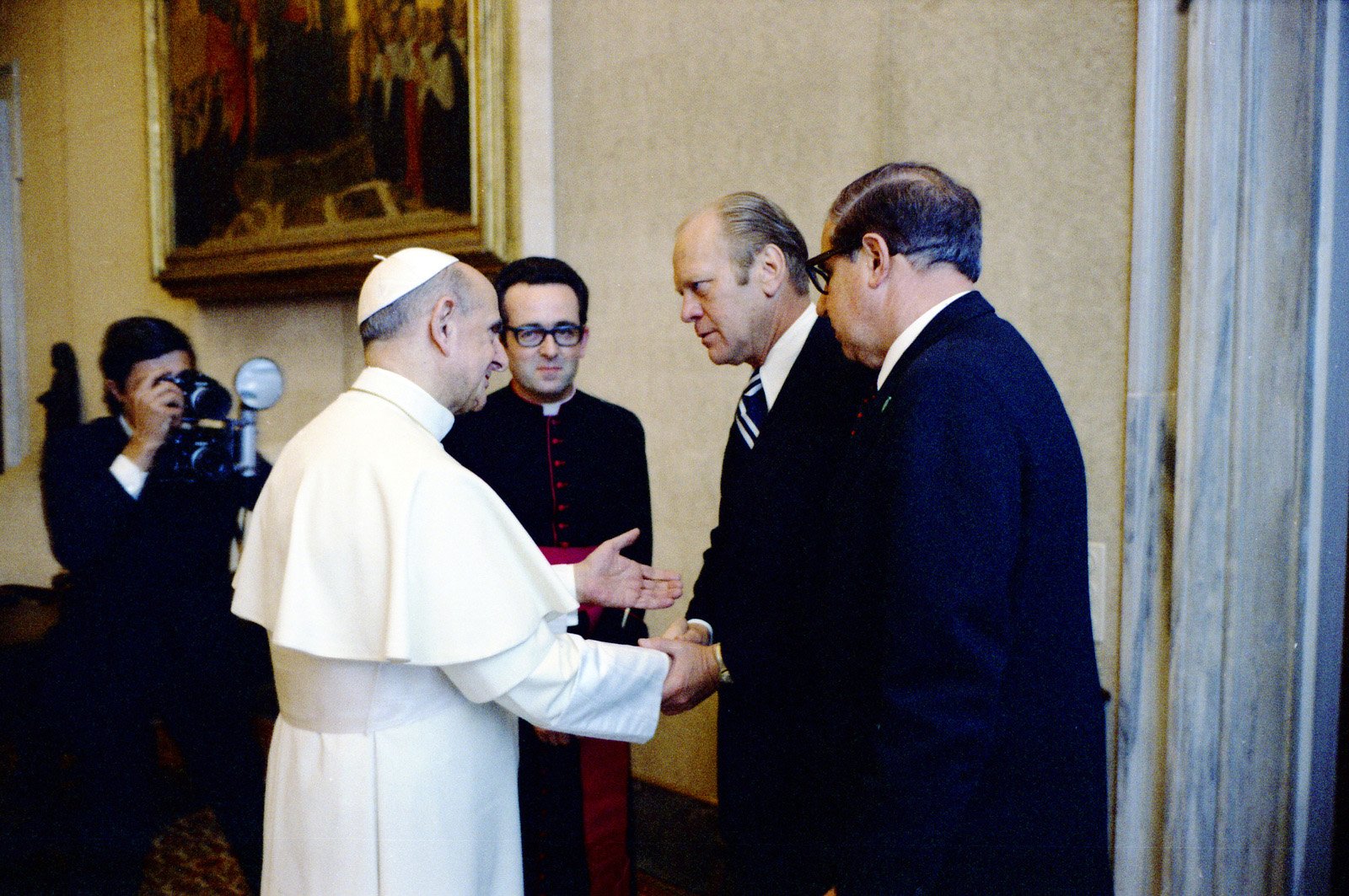 With Europe increasingly divided by the Cold War, the meeting between President Gerald Ford and Pope Paul VI focused on how to promote unity. The two met at the Vatican on June 3, 1975. Secretary of State Henry Kissinger was also in attendance.

During the brief encounter, the pope encouraged the U.S. to leverage its now established position of leadership for unity. They also addressed the rising tension between Israel and Egypt, with the pope promoting a “peaceful coexistence” between Christians and Muslims. The Middle East would increasingly became a point of contention in U.S.-Vatican diplomacy. 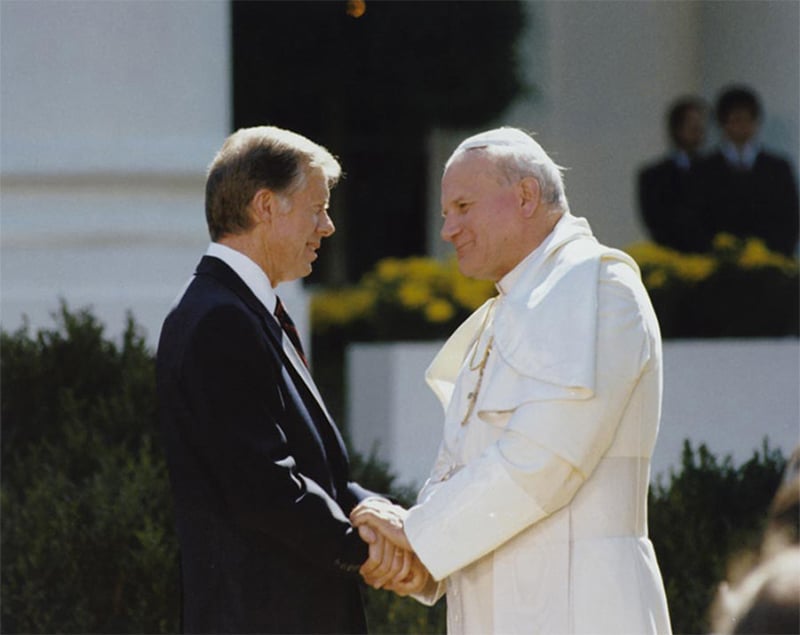 In 1979, Pope John Paul II became the first pope to visit the White House. A year later, on June 21, 1980, he met with President Jimmy Carter in the papal library at the Vatican.

During the meeting, Carter condemned the Soviet Union’s expansion in the Middle East, especially its invasion of Afghanistan. John Paul II directed the president’s attention to finding a resolution to the conflict between Israel and Palestine.

At the end of the meeting, the pope gifted Carter with a leather-bound copy of the Bible for the president to read. Seeing that the text was in Latin, Carter jokingly told the pope, “It would be easier for you than me!” 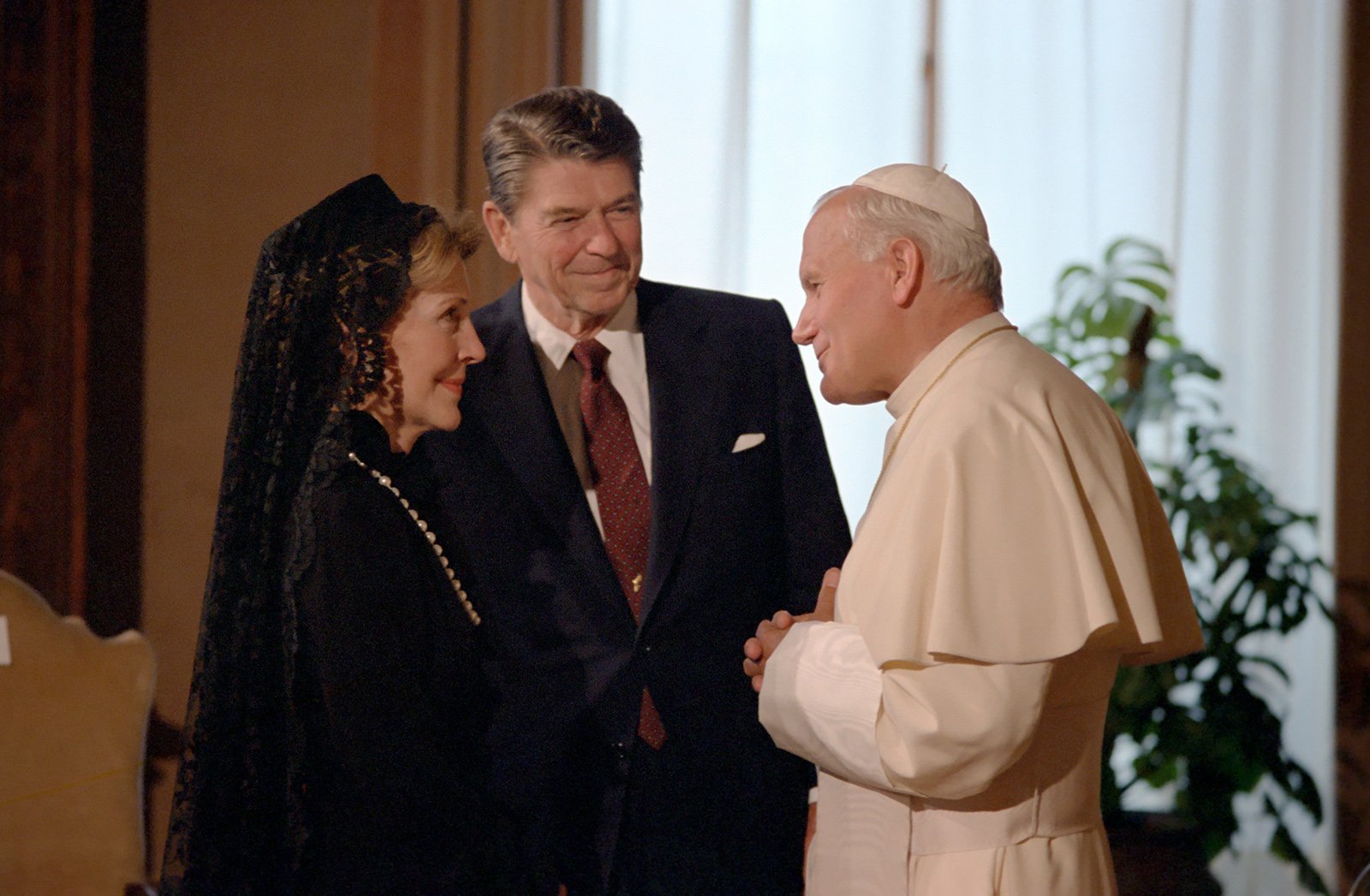 A number of books and films have been made documenting the synergy between President Ronald Reagan and Pope John Paul II, a relationship many argue contributed to the defeat of communism and the Soviet Union. The two met twice at the Vatican and twice in the United States.

When Reagan and John Paul II met for the first time at the Vatican on June 7, 1982, they already had much in common. In 1981, they both survived assassination attempts, and they viewed their meeting as a divine sign that they had a purpose to fulfill. “God saved us both,” John Paul II reportedly said, “so that we can do what we are about to do. How else can it be explained?”

The meeting, which lasted 50 minutes, marked the first time a pope and a president spoke alone behind closed doors. The two had exchanged a flurry of letters in the months leading up to the meeting, addressing the future of Europe and an end to the escalating nuclear tensions.

For the next six years, the Reagan and John Paul II partnership reshaped Europe amid the tumult of the Cold War, revealing the potential of a union between two global and moral superpowers. Two years after the meeting, the Holy See and the United States established official diplomatic relations. 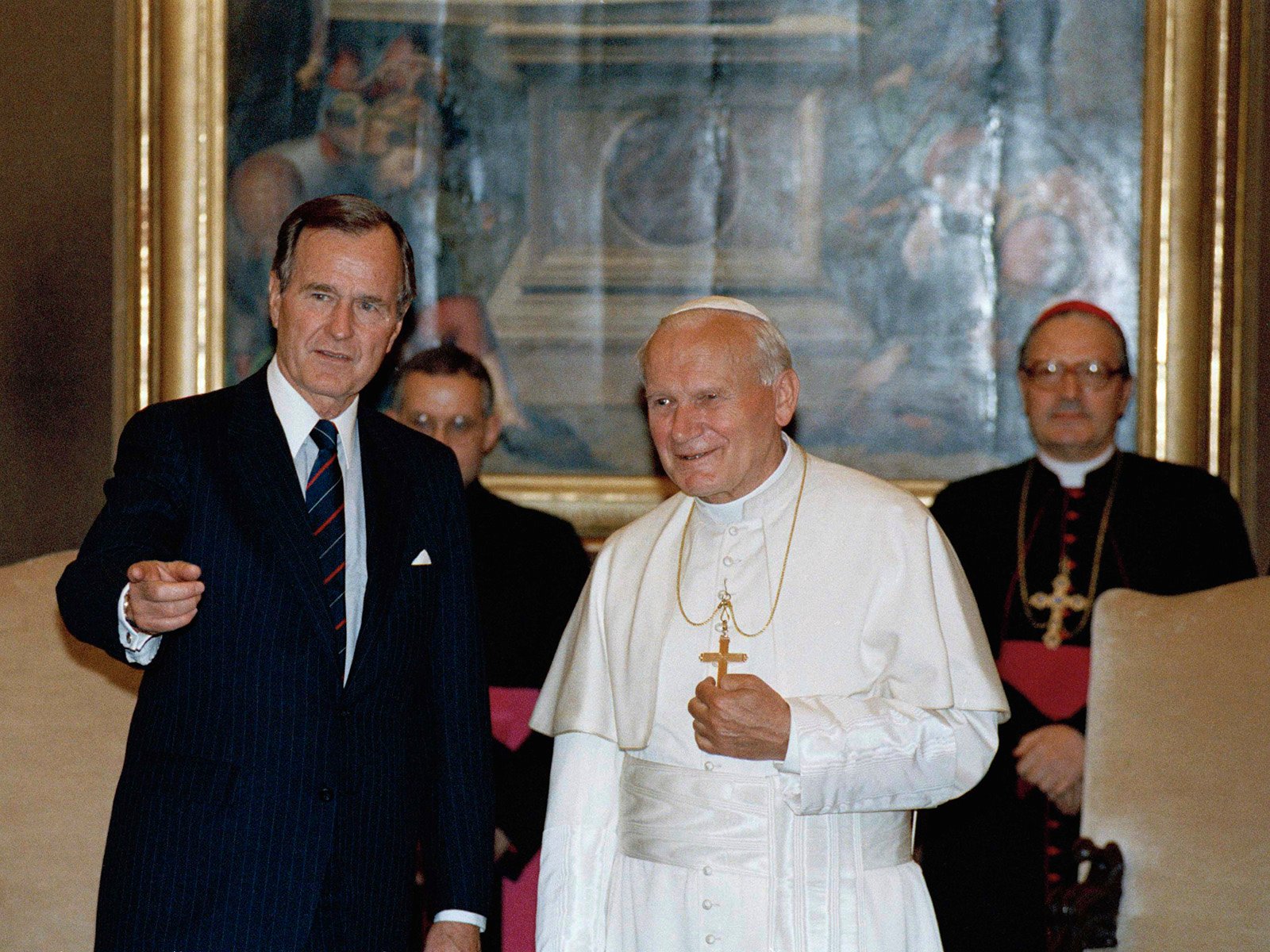 In this May 27, 1989, file photo, President George H.W. Bush gestures while standing with Pope John Paul II in the papal library at the Vatican. (AP Photo/Ron Edmonds, File)

President George H.W. Bush met with Pope John Paul II twice at the Vatican — in 1989 and 1991 — but both times the shadow of war hung over the encounters. John Paul II’s appeals for peace had become louder after the U.S. engaged in the First Gulf War, which the pope had described as “an adventure with no turning back.”

“The dignity of America,” the pope said before the cameras at their second Vatican meeting, “the reason she exists, the condition for her survival; yes, the ultimate test of her greatness: to respect every human person, especially the weakest and most defenseless ones, those as yet unborn.” 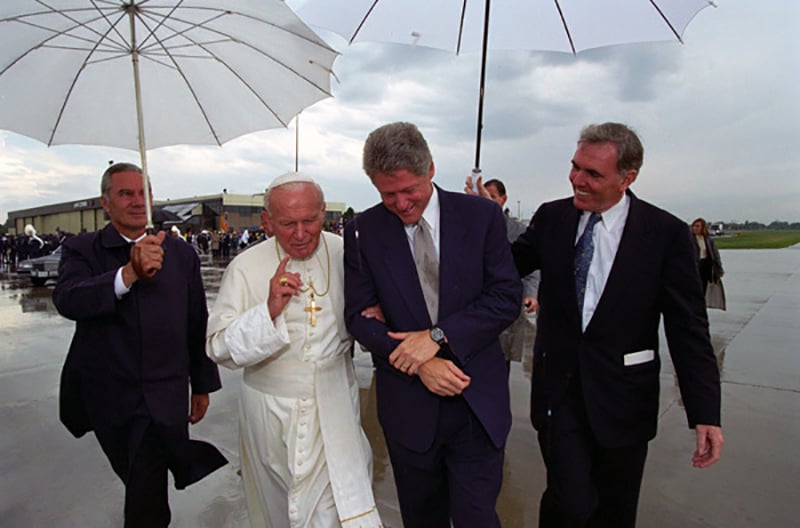 President Bill Clinton met with Pope John Paul II at the Vatican on June 2, 1994. The two had met three times before in the United States, where the contentious question of abortion hung over the meetings. The pope called on the “responsibility of the great American nation, which always upheld the ethical values at the base of every society.” Clinton gifted the pope artwork representing an olive branch, promising “joint efforts to promote the central role of the family in society.”

No president has visited the Vatican more often than President George W. Bush, who made four trips to the Eternal City, plus a fifth meeting with the pope just outside Rome.

On May 28, 2002, Bush had his first encounter with Pope John Paul II at the Vatican, just months after the attacks on the World Trade Center. The pope failed in convincing Bush to halt the U.S. invasion in Iraq and chastised the war in a following meeting in June 2004. President George W. Bush presents the Medal of Freedom to Pope John Paul II during a visit to the Vatican in Rome on June 4, 2004. White House photo by Eric Draper

Despite the tensions, Bush praised the pope and said “being in his presence is an awesome experience.” On their last meeting at the Vatican, Bush awarded Pope John Paul II the Medal of Freedom.

Bush also met with Pope John Paul II’s successor, Benedict XVI, at the Vatican in both 2007 and 2009. Their conversations centered mostly on tensions in the Middle East, and their differing views on Iraq and the Israeli-Palestinian conflict overshadowed common agreement on abortion. 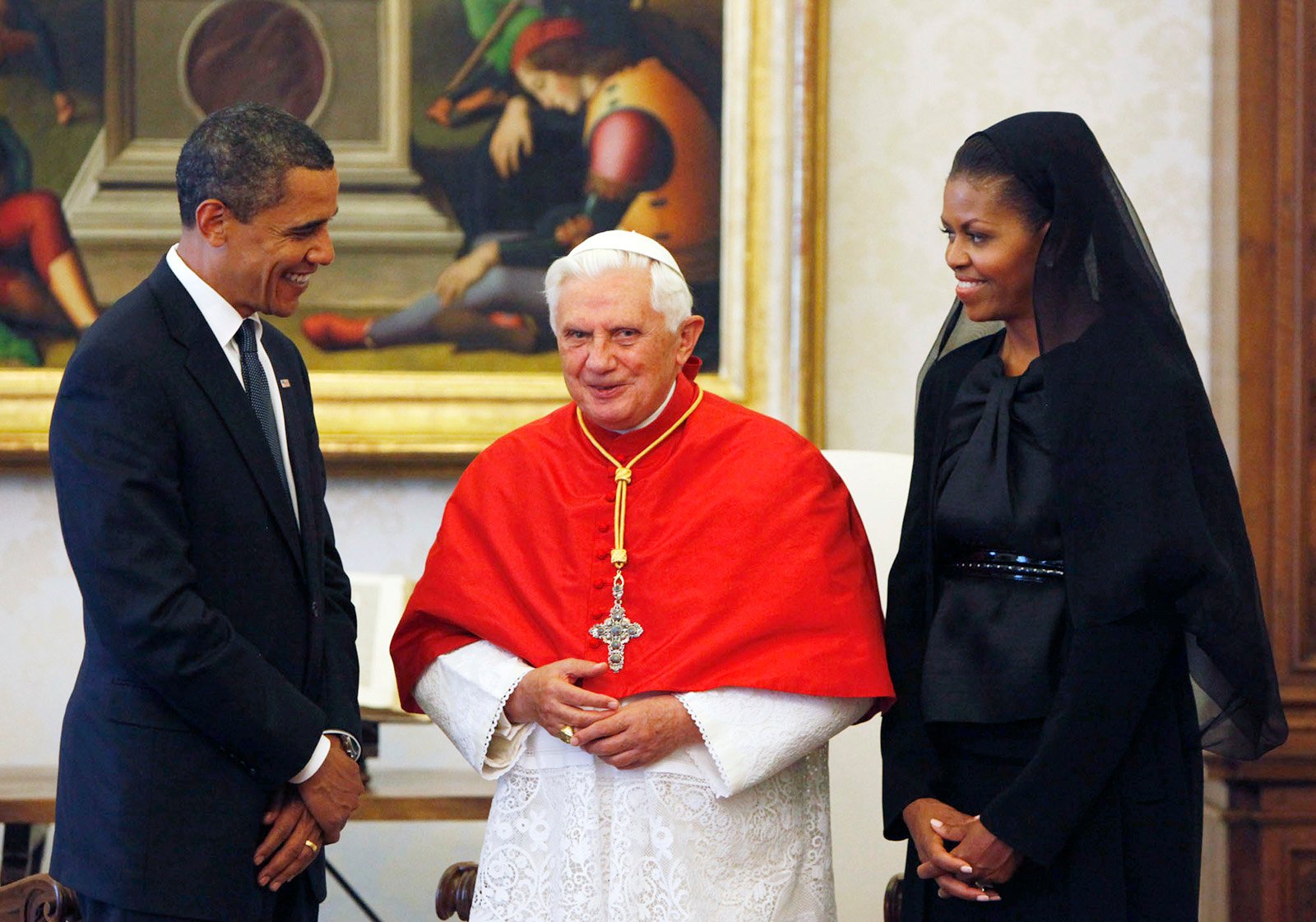 The meeting between President Barack Obama and Pope Benedict XVI at the Vatican on March 27, 2014, lasted roughly 40 minutes. As cameras flashed furiously before them, Obama told the pope, “Your holiness, I’m sure you’re used to having your picture taken,” adding that he was “getting used to it.”

To underline his opposition to abortion and contraception, Benedict XVI gifted Obama with a document from the Congregation for the Doctrine of the Faith, which Benedict once headed, on bioethics titled “Dignitatis Personae” or “The Dignity of Persons.”

The two met again in March 2014, where they discussed “the exercise of the rights to religious freedom, life and conscientious objection,” according to the official Vatican statement on the meeting.

Trump and Pope Francis: The walls, the bridges and the frown 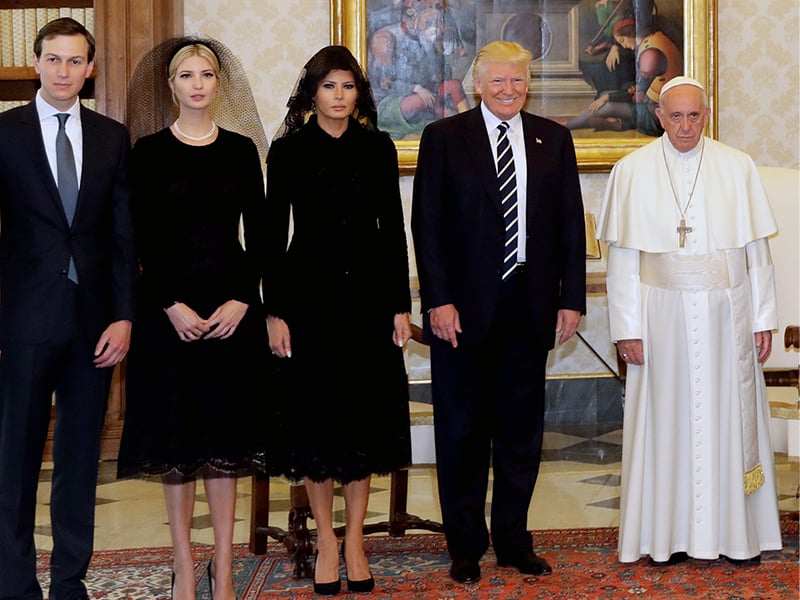 Pope Francis poses with President Donald Trump during a private audience at the Vatican on May 24, 2017. Also with them are Jared Kushner, Ivanka Trump and first lady Melania Trump. (AP Photo/Alessandra Tarantino)

Tensions had already formed before Pope Francis and President Donald Trump met at the Vatican on May 24, 2017. Only a year before, the bridge-building pope had seemed to criticize Trump’s intentions to build a wall on the U.S.-Mexico border, stating “a person who thinks only about building walls, wherever they may be, and not building bridges, is not Christian.”

Trump pushed back against the papal jab on Twitter, describing the pontiff’s remarks as “disgraceful.” The Vatican meeting culminated with a photo capturing one of the pope’s most infamous frowns.

After the short meeting, the mood seemed to lighten slightly, with Trump thanking the pope and telling him, “I won’t forget what you said.” Pope Francis gifted the president a copy of his “green” encyclical on the environment, “Laudato Si’.” But in 2020, Trump announced the United States would withdraw from the Paris climate agreements.