LOS ANGELES (RNS) — Helen Lopez remembers the joy of her 22-year-old grandson Hunter Lopez, a U.S. Marine corporal, when she would make her potato salad recipe that he loved so much. When she made it for him, he’d embrace her and give her a kiss on her forehead.

Hunter loved to eat everything, from tamales to doughnuts, but particularly sweets. The eldest of his siblings, Lopez looked after the others and always wanted to know more about his family’s history, particularly his great-grandfather, who was a boxing champ. Lopez, the son of two Riverside County sheriffs, talked about joining the armed forces from an early age.

Two months ago, Lopez was one of 13 service members who were killed in an August bombing at the Kabul airport in Afghanistan. Now his grandmother and family will bring these memories to life by helping put together an altar in his honor this Día de los Muertos.

His grandmother said Lopez will be remembered as a person who was joyous, respectful and of service to his country and community.

RELATED: For many who lost loved ones to COVID-19, this Day of the Dead will be a time of healing

Día de los Muertos, or Day of the Dead, is one of Mexico’s oldest Indigenous celebrations, during which it’s believed the dead are allowed to visit and comfort the living and delight in the ofrendas, or offerings, left for them on makeshift altars. It’s observed on All Saints’ Day and All Souls’ Day, Nov. 1 and 2. 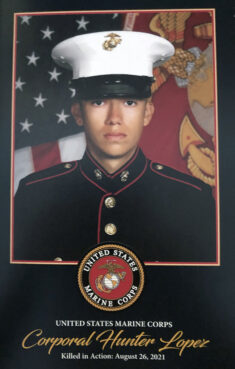 U.S. Marine Corps Cpl. Hunter Lopez was one of 13 service members killed in an August bombing in Afghanistan. Photo courtesy of Maria Acosta

The altar, honoring Lopez and the other service members, will stand at Calvary Cemetery in East Los Angeles, alongside other shrines honoring those who have died of COVID-19 or mental health conditions, and shrines honoring the victims of human trafficking.

With the ongoing pandemic, Día de los Muertos events, although not as restricted as in 2020, will continue to look a little different this year across the southwest U.S.

Los Angeles Archbishop José H. Gomez will lead an outdoor prayer vigil Nov. 1 at the cemetery’s mausoleum, the second time since the event’s founding in 2014 that the vigil will be livestreamed instead of being held in person.

Brian McMahon, a director with the archdiocese’s Catholic Cemeteries & Mortuaries Department, said that even though the celebration of Día de los Muertos and All Souls’ Day will again be modified, “that has not dampened our efforts to provide a meaningful catechetical day for the children, our evening prayer vigil, All Souls’ Day Mass, and altar displays.”

At the Shrine of Our Lady of Guadalupe in Des Plaines, Illinois, congregants are invited to bring their images of saints to bless, as well as photos and other mementos of their loved ones to build altars with their offerings. Last year, the event was virtual. The Rev. Esequiel Sanchez said that, in this time of COVID-19, they’re “encouraging people to be safe, but not afraid.”

In El Paso, Texas, Bishop Mark Seitz will celebrate the Mass for All Souls’ Day, which will be livestreamed from Mt. Carmel Cemetery on Tuesday, Nov. 2. The faithful can register for the ashes of their loved ones to be buried as part of the internment of ashes following the Mass. 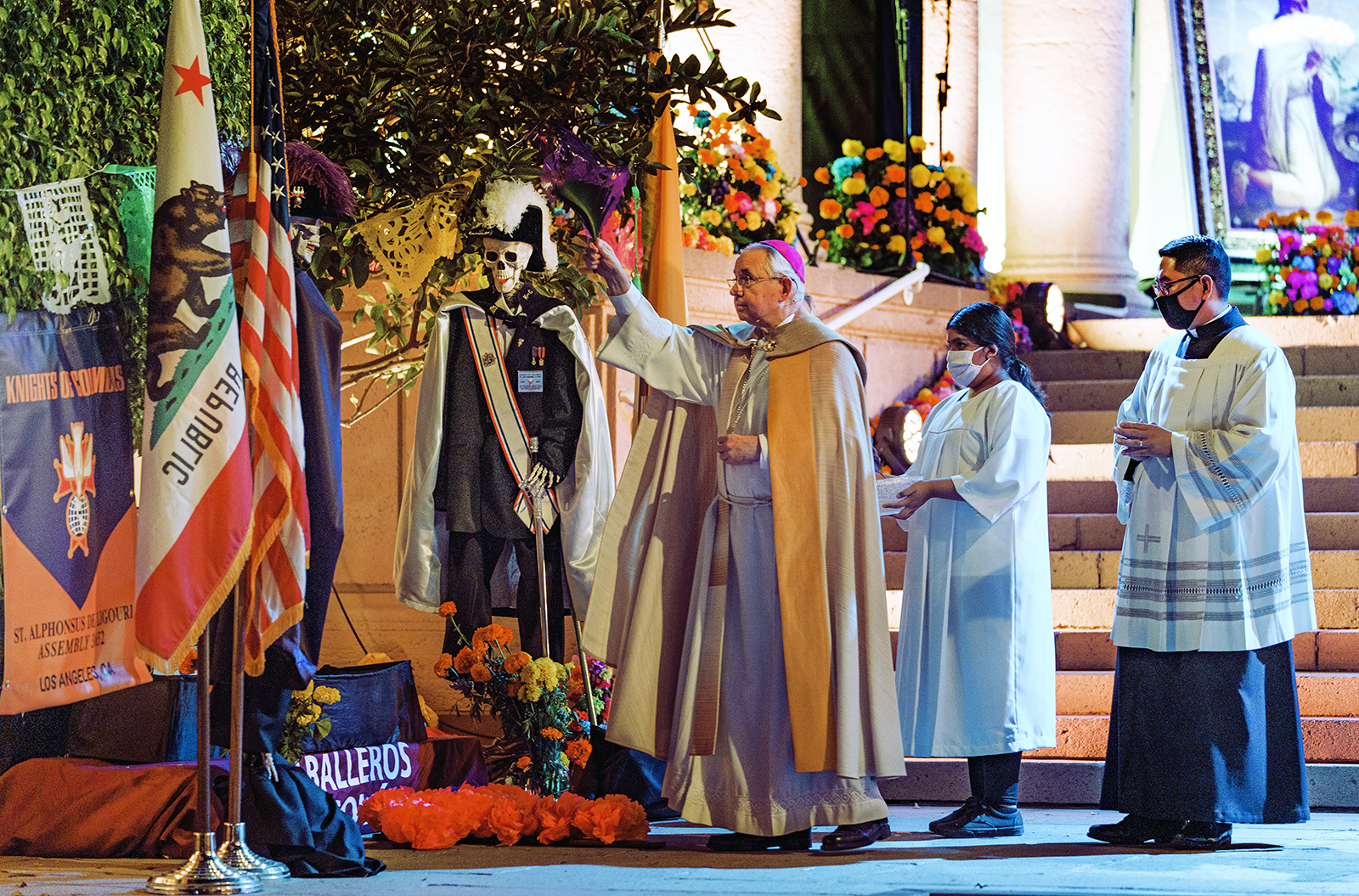 Los Angeles Archbishop José H. Gomez blesses an altar for the Knights of Columbus, Caballeros de Colon, in the outdoor courtyard of the Mausoleum of Calvary Cemetery and Mortuary in East Los Angeles, Sunday, Nov. 1, 2020. Day of the Dead, or Dia de Los Muertos, is the annual Mexican tradition of reminiscing about departed loved ones with colorful altars, or ofrendas. (AP Photo/Damian Dovarganes)

Altars on Día de los Muertos come in all shapes and sizes and are decorated with photos, mementos, food and flowers, particularly marigolds known as “cempazuchitl,” or “flores de muerto” — flowers of the dead. Mexican bakeries prepare sweet “pan de muerto” (bread of the dead) that many present on their altars.

Día de los Muertos is a way to reconnect with pre-Hispanic traditions that perceive death as a natural phase in the sequence of life. For some Catholics, it’s connected to the notion that death has been overcome by Jesus Christ.

RELATED: How commercialization over the centuries transformed the Day of the Dead

According to 16th- and 17th-century Catholic belief, wrote Mathew Sandoval, a lecturer at Arizona State University, in a recent essay, “the majority of souls landed in purgatory after death, rather than heaven or hell.”

“It was the responsibility of the living to help alleviate the suffering of souls in purgatory and assist them in getting to heaven. This could be done through prayer or by making offerings to the souls,” Sandoval explained. 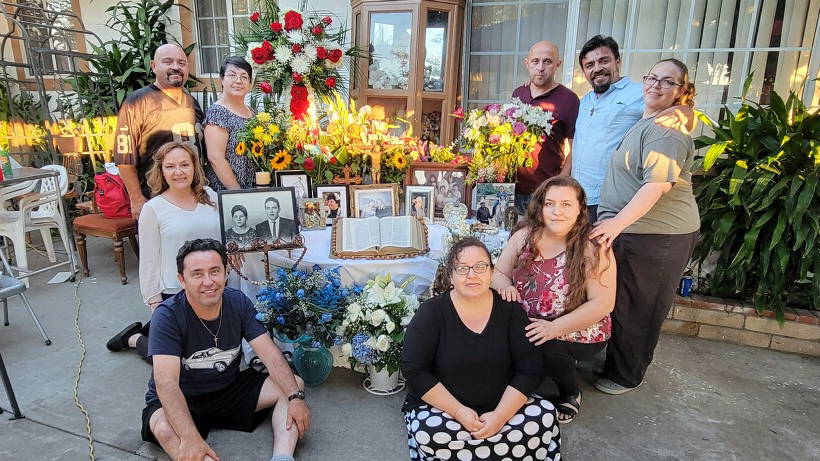 The nine children of Miguel García Villalobos and María del Rosario Sánchez de García pose around an altar for when they prayed the Novena for their parents. Photo courtesy of the García family

For Stella García and her eight siblings, this is the first time Día de Los Muertos will really hit home.

“The thing is they died so quickly and then my mom was doing so well, but when my dad passed away, she just kind of said, ‘I’m ready,’” García said of her parents, who hail from the Mexican state of Zacatecas. “She just started spiraling, going downhill after that.”

The aftermath has been taxing, especially dealing with hospitals and doctors, García said. She takes comfort knowing that her mother was a “very devout” Catholic. She walked every day to her Los Angeles-area church in South El Monte, she said. 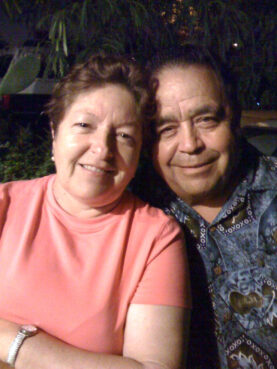 “She had been preparing to meet our Lord all her life,” she said. “We believe in the resurrection, and we live with the hope that we’re going to reunite again.”

To García, Dia de Los Muertos “is a reminder that we cannot forget about our loved ones.

“We need to keep praying for them. As Catholics, we believe in purgatory, that there is a place where we will all go, where we will be purified from all our sins.”

Even though her parents were “good and faithful,” García said they still need to pray for them, so if they’re not yet in heaven, they can make it there quickly.

García also thinks of “las ánimas del purgatorio,” those who have not yet ascended to heaven and may not have anyone to pray for them. Her family, she said, will be praying for her parents and “all souls in purgatory.”