(RNS) — When I was growing up in Atlanta in the 1970s and ‘80s, Diwali meant we gathered at the International Society for Krishna Consciousness temple. Although most “Hare Krishnas,” as ISKCON devotees are known, are not Indian, theirs was the only Hindu temple in Atlanta at the time. After prayers, all our Indian American families would go out to lunch together. Celebrating Diwali brought us together with dozens of other immigrant families.

Diwali commemorates the story told in the epic Ramayana of Lord Rama’s return to Ayodhya after 14 years of exile in the forest. Arriving on a dark night, he was welcomed home by rows of lamps (diyas, in Sanskrit) along the road, set out by the city’s people to light his way.

As a young person, I always preferred the Ramayana to other Scriptures such as the Puranas and the Mahabharata. The story of the Ramayana resonated with me.

Community leaders exposed us to Hindu texts, and priests taught us chants and prayers in Sanskrit, but we were rarely taught what Christians call exegesis — expounding upon Scripture to apply its enduring lessons to life today.

RELATED: Modi’s Diwali extravaganza shows why we need to tell the many stories of Rama

The Ramayana was just a story about ancient history. And yet — reflecting on it now, as an adult — our community was living out Ramayana stories every day.

There are many life lessons in the Ramayana. One of the most important one is this: No one goes it alone. 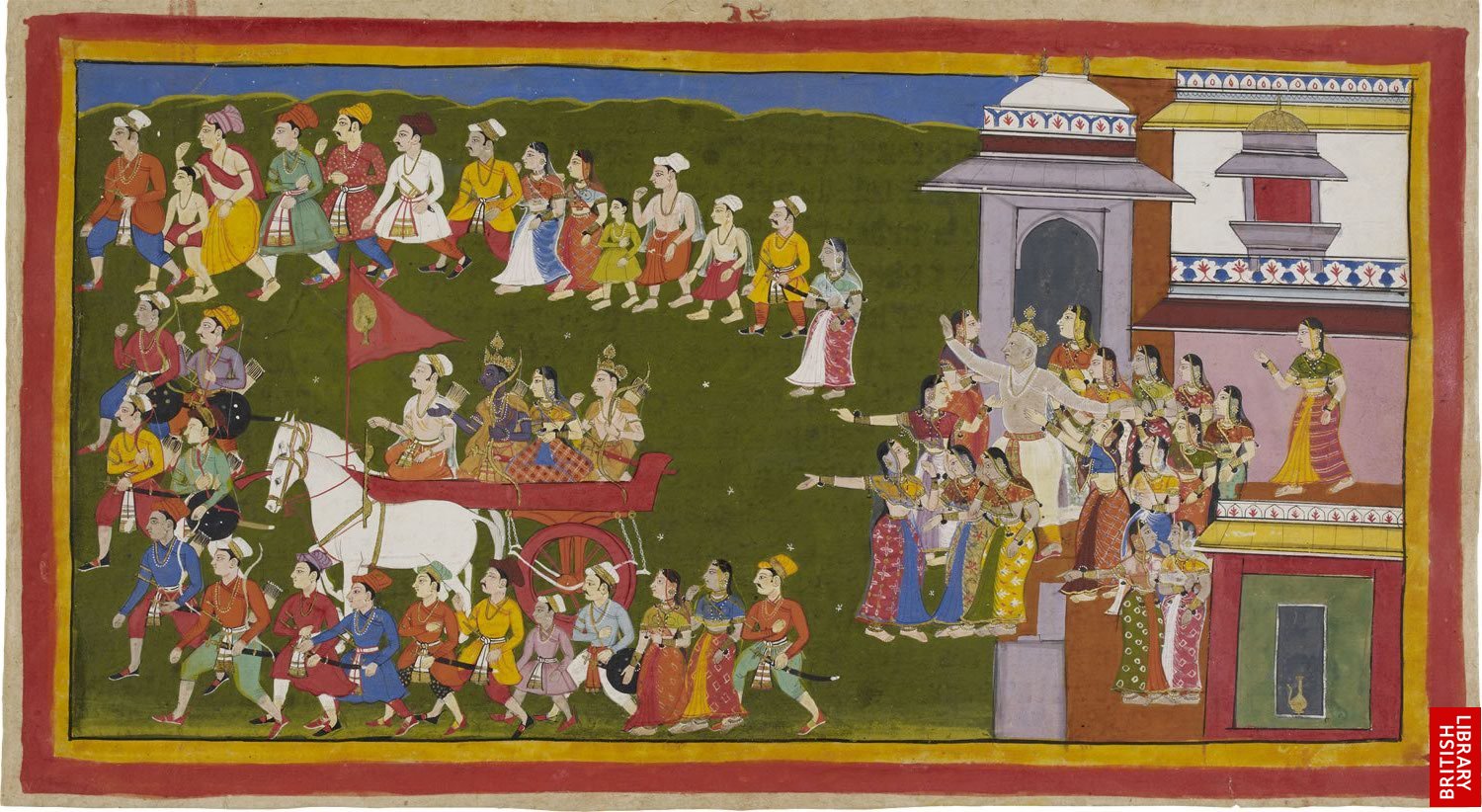 Lord Rama, in wagon, leaving for 14 years of exile from Ayodhya. Image courtesy of The British Library/Creative Commons

When he was exiled to the forest by his father, King Dasharatha, Rama wasn’t alone. His brother Lakshman went with him. His love, Sita, went with him. He was surrounded by the creatures of the forest. When Sita was kidnapped by the demon Ravana, it was Rama’s friend and devotee Hanuman who helped him rescue her.

The bonds among my parents and their fellow immigrants — particularly those who arrived soon after the United States opened to wider Asian immigration in 1965, when there were virtually no existing Indian American communities — are every bit as strong as those among Rama and the friends around him.

Immigrants chose to come here. But, like Rama, they were also going into the wilderness, and they had no idea what they were in for. Most who immigrated here had plans to return home. Then, eventually, they realized this was home.

I think about all the families I grew up with. Just as I can name the figures in the Ramayana, I can name those who helped us: The uncle and auntie who met my father at the airport when he arrived in 1971. Another uncle, who helped my dad buy a car when we moved to Atlanta in 1975. All of those who worked together to create community and eventually built our first Indian American community temple.

I’ve heard this story told by many Indian immigrants over the years: “When I arrived, I didn’t know anyone, so I opened the phone book, found someone with an Indian last name, and called them up.” For some, a ride from the airport began a lifelong friendship. We can all name our own Lakshmans, Sitas and Hanumans. Whether it was helping with child care, or helping one another when our grandparents visited from India, or helping each other in business or through illness, no one went it alone.

The bonds forged in the early days of the immigrant experience were as strong as those from birth. Those relationships sustained and built communities that still thrive, 50 years later, as third and subsequent generations learn about the Ramayana.

So for Indian American Hindus, Jains, Sikhs and others, celebrating Diwali isn’t just celebrating with community — it is celebrating community. None of us goes it alone. We can find friends in any wilderness, and there will be light to guide our way home.

Let us remember how our modern life today can connect with eternal stories, and let us celebrate that we are writing the next epic of the American story together.

Happy Diwali, and Saal Mubarak for those celebrating the New Year.