CHICAGO (RNS) — This holiday season, American Girl characters Samantha, Addy and Josefina can celebrate the Christian holiday of Christmas, the Jewish holiday of Hanukkah or Diwali, the festival of lights observed by Hindus, Jains, Buddhists and Sikhs.

Next year, they’ll be ready for the Muslim holiday of Eid al-Fitr, too.

The religious holidays are part of a capsule collection of doll clothes and accessories for six cultural celebrations and were released last week by American Girl, the popular line of dolls and books telling the stories of American girls throughout history to the present day.

“American Girl was built on a foundation of diverse and inclusive stories and products that have inspired and empowered an entire generation of girls,” according to a statement by American Girl, which is owned by Mattel.

“The brand is committed to accelerating its progress in this important area to better reflect what it means to be an American girl today. The new Cultural Celebration Collection is just one example of how we are doing that.” 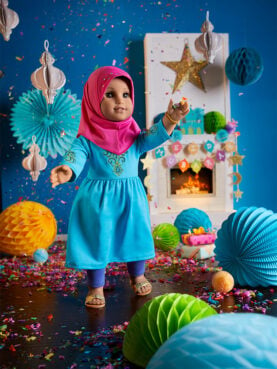 In addition to the four religious holidays, the Cultural Celebration Collection also includes doll outfits and accessories for Kwanzaa and the Lunar New Year.

All six outfits were created with input from several advisers both inside and outside the company to ensure their authenticity, according to American Girl.

They are available now in American Girl stores across the country or in the Celebration Shop on the company’s website, and each is accompanied by a booklet sharing information about the holiday’s meaning and importance.

The outfit for Eid al-Fitr — the Muslim holiday marking the end of Ramadan, a holy month of prayer and fasting — includes a long-sleeved turquoise abaya, a pink hijab decorated with rhinestones, leggings, sandals and beaded bracelets that will fit any of American Girl’s 18-inch dolls.

In the week since it was released, the outfit has gotten 43 reviews on the American Girl website — all five-star. 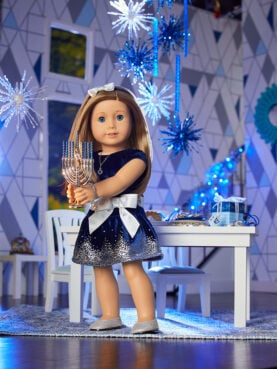 “This is a huge step for American Girl – we hope to one day see a Muslim American doll with her own story in the lineup!” reads one review.

“If only American Girl had this when I was growing up! Thank you for helping young American Muslim girls feel recognized and for encouraging them to embrace all parts of their identity,” reads another.

The Cultural Celebration Collection comes after a number of petitions in recent years asking for American Girl to create a doll representing a Muslim American girl.

Among those who have reached out to the company pushing for Muslim representation is Chicago-based activist Yasmina Blackburn, who advised designers on the creation of its Eid al-Fitr outfit, American Girl confirmed to Religion News Service.

Blackburn had first written a letter to the president of the company in 2009, hoping for a doll who looked and celebrated holidays like her daughter, who was 8 years old at the time. She reached out again in 2020 and received a positive response, according to the Chicago branch of the Council on American-Islamic Relations. “I am thrilled to work with American Girl in making their products more inclusive, especially celebrating Muslim holidays and traditions,” Blackburn said in a written statement through CAIR-Chicago.

“I worked closely with the designers to ensure the first outfit was typical of an American Muslim girl and not feeding Oriental stereotypes. I’m very happy with the results and for future Muslim items to come out of the AG line. It’s important for kids to feel that their holidays are recognized at school and in the public sphere as well as on toy shelves.”