CHICAGO (RNS) — As an American child growing up in Belgium and France, Laura Laurie mostly learned about American history from the popular American Girl books.

Her favorite of American Girl’s historical characters was Kirsten, the girl of the 1850s, who emigrated with her family from Sweden to a homestead in what is now Minnesota.

Today, Laurie’s 6-year-old daughter reads those books and plays with her Kirsten doll, their blond hair in matching braids.

Laurie wants other American girls — girls who don’t look like her daughter and who have a different American story — to have the same experience.

“People are still fleeing their countries and coming here and learning English and making friends and growing aspirations for who they want to become,” she said.

RELATED: Refugee data on religion disappears as fewer persecuted Christians admitted to US

Laurie thinks it’s time for the popular toy company to tell a new story of coming to America. She’s started a petition asking American Girl to model its next doll after a modern refugee.

“We’re not homesteading now, but that story is still relevant today,” Laurie said. Laura Laurie and her daughter with a matching American Girl Kirsten doll. Photo courtesy of RefugeeGirl.org.

She worked with an illustrator to create three suggested characters for American Girl, each reflecting a different refugee experience: Maiah, Sara and Magan. Two of the three wear a headscarf, and Laurie said she imagined all three as Muslim.

The American Girl company has a unique platform to model compassion, curiosity and belonging for children as it shares the stories of American girls from a variety of times, places and experiences, according to Laurie’s petition on Change.org.

American Girl has several historical characters, each accompanied by her own doll and series of books. The newest is Courtney, who hails from the less distant past: 1986.

Kirsten, one of its three original characters, since has been retired.

The company also produces a contemporary Girl of the Year each year. The girl of 2020 is Joss, a “fierce surfer girl” and its first doll with a disability (she wears a hearing aid).

Seeing a refugee girl among them would make refugees’ stories come alive for young readers unfamiliar with their experiences in the same way other characters make history come alive, Laurie said.

Hers isn’t the first petition to ask American Girl to create a Muslim character.

In 2017, another Change.org petition, by then-middle school student Salwa Khan and her little sister, Zahra, asked the head of the company to create a Muslim American doll. It garnered more than 14,000 signatures.

It’s important for young Muslim girls to see themselves represented in beloved stories and dolls like American Girls, said Judy Sengsone, creator of MU Girls, a collection of Muslim characters featured in coloring books, stickers and other educational materials. 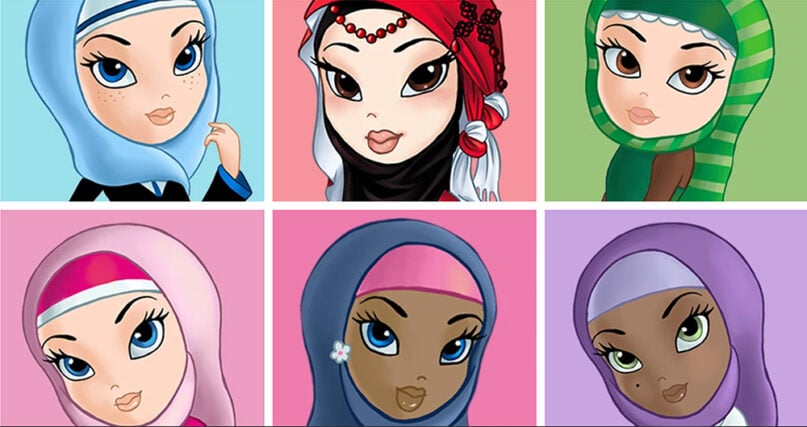 A variety of the characters on the MU Girls site. Image courtesy of MUGirls.com

Sengsone started MU Girls when she was pregnant in 2000 so her daughter would grow up with positive role models and encouragement both to be herself and to be proud of her beliefs.

“When a Muslim girl sees characters she can relate to, she can be really proud of herself and wear the hijab and still be different, but, at the same time, be a part of that community,” she said.

It’s important, too, to share refugees’ stories, according to Jody May, education manager at Exodus World Service, a Christian nonprofit based in the Chicago suburbs that works to build bridges between Christians and refugees who are resettled in the area.

It’s not just refugee children who will recognize themselves as American girls in the story, but all children and their parents, May said.

“I think this is a really great way people can learn about refugees  — not only the kids, but their parents, as well. They often will read the stories together,” she said.

“For children to be able to see these dolls and see themselves in the character in the story that’s behind the doll is so beautiful, and I really see that as being something that allows our children to grow in them a desire to welcome others who may be different than themselves,” May said.

RELATED: As fewer refugees enter the US, one Chicago group decides to go to them

Laurie, who now lives in Chicago, has volunteered with Exodus World Service for years and said her own Christian faith motivated her to create the petition, which has gathered more than 660 signatures since she posted it online earlier this month.

She completed the project, which also includes a Refugee Girl website, as part of a fellowship through her church, Holy Trinity Church in Chicago. Asked to identify an area of “brokenness” in the city, she thought of the lack of positive stories she heard about refugees.

“I think by inviting the American Girl company to pay attention to the importance of refugee stories and people, we are showing God’s love to the world and to refugees,” she said.

Laurie would love to see her petition go viral and to see a refugee American Girl doll in the windows of the company’s store at Water Tower Place on Chicago’s Magnificent Mile.

But, she said, her actual goal for the project is much more ambitious. She hopes children reading the books will be encouraged to befriend others who might look different from them or have different experiences.

And, she said, “Who knows down the road what will become of that?”