(RNS) — The Rev. Jacqui Lewis is a rising star in progressive Christianity. She’s the pastor of the historic Middle Collegiate Church in Manhattan, a multicultural, multiethnic and queer-friendly congregation. She’s a renowned preacher and a sought-after speaker.

And she’s an author, with her newest book, “Fierce Love: A Bold Path to Ferocious Courage and Rule-Breaking Kindness That Can Heal the World,” out Tuesday (Nov. 9).

This RNS interview has been edited for length and clarity.

I’d like to ask about the context for this book. You talk in the introduction about how we have a lot of tribalism right now. Can you describe what America looks like from your perspective as a pastor and a thinker?

The context started, if I’m honest, once I moved to Manhattan 16 years ago. There was such an opening up in me. I’ve always been progressive; I’ve always been a pluralist. But Middle Church has just cracked me wide open to be in a community of revolutionaries.

These are the theologies of my people that rise up into mine, that get me to be able to teach love. But as the years went by, with the deaths of folks like Trayvon Martin, Michael Brown, Sandy Bland, there’s just giant evidence that things are off the rails. What the nation needs is a salve, a balm, a binding place where true religion is. Religion really means let’s bind together because we are so fractured. We’re so splintered. We are unkind, uncivil, racist, homophobic, transphobic, anti-women’s rights. The pendulum has swung so far to the right. And that’s not right.

So really the context is, can I help set a table for people to see themselves in this book, by being so transparent? Can I help people deal with loss of their old faith through these nine steps, these practical things to just make you and your place in the world better?

That’s a great segue into the next question, actually; I love the way you’ve structured the book as a kind of opening outward. You’re beginning with love for self and then love for your own people and then love for the world, writ large. Why did you decide to structure it in that way, starting with self-love? 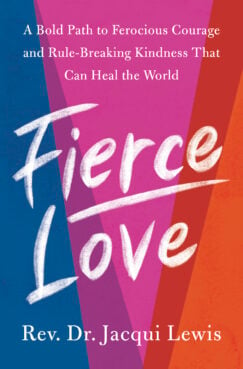 I have a Ph.D. in psych and religion. You and I know that almost every world religion has a call to love your neighbor as yourself. Jesus picks up the Jewish mandate to love neighbors and to love strangers. Love God with everything. Don’t leave anybody behind. Don’t do anyone harm. Don’t withhold that which you need for yourself from someone else.

But what’s going on, Jana, is that we’re not loving. We’re not loving ourselves; therefore, we can’t love the other ways. I don’t think we are ever taught to love ourselves. That’s a step that we miss, that important building block, especially with faith people. Faith people say, “That’s narcissistic. That’s navel gazing.” You know?

So to practice an unconditional regard for yourself so you can have a nonpossessive delight in the other and the love of the world is, I think, almost a revolution in itself. It’s fierce to start with us.

How do we move outward from the love of self to include that radical love for the other people in our lives?

You learn to love by telling the truth, by letting go of your burdens, by loving your posse, by practicing radical crazy kindness. I tell a story of a Canadian woman who saved my life when I had a car accident, who just really took care of me and left no one behind.

And then in the final section, it’s about increasing your tribe by understanding that all these people are your people. The steps and the practices in the book are everyday practices that have worked not only in my life, but in the lives of my congregants and the people in my world of activist work.

In the book you say ‘the world doesn’t get better unless we all get better.’ And ‘if there is such a thing as salvation, we are not saved until everyone is saved.’ That community focus is a strong theological statement for such a me-first culture.

It is strong, and I really believe it. Derrick Bell, who is one of the people responsible for critical race theory, had a book I read 20 years ago in which he makes that case. If there is still a child who doesn’t have clean water in Detroit, and a child sleeping under a foil blanket, are my grandbabies really saved? How can you have a religion that parachutes you out of the world? Jesus said it’s about abundant life now. I think “saved” is flourishing and food on the table and democratic values and the ability to vote and a woman’s right to make a decision about her own life and on and on. It’s Mother Earth not burning down literally around us. That’s saved.

And we’re not actually saved. Injustice anywhere is a threat to justice everywhere. That’s what I’m talking about: King, Gandhi, the interrelatedness of humankind, the inextricable connection. My fighting and my surviving, Jana, will lead to yours. That’s what it means to be human.

Yet we’re living in a time when we’re too divided to see how much we’re connected. What do you think is going to happen next in America?

There’s a death throe going on for white supremacy and patriarchy and homophobia and antisemitism. “We will not let go of our power. No, we will not. We will die before we concede to the browning of America. We will blow this sucker up before we give up our freedom, before we let you tell us to inoculate ourselves and wear masks.” It’s an existential resistance.

But good people all over the globe are meeting that fascist, horrific violence with love and activism and solidarity. I mean, my friends who are Sikh and Muslim and Buddhist and atheist and Quaker are working on injustice across the country. And all around the globe, there are Black Lives Matter pockets and people are standing up for women’s rights and the right to vote and to cease the erosion of democracy.

And so, while I have hope — I do, I really have hope — I also think we haven’t seen the end of the morass of the messiness. My friend Valarie Kaur says, “is this the darkness of the womb, or is it the darkness of the tomb?” It’s both. There’s the dying of an old system that’s on life support. But we’re also birthing something to be celebrated. The darkness is lonely and nourishing and holding us, and we’re going to come out of it anew.

After Middle Church fire, advice from other houses of worship that have survived disaster