(RNS) — The release of “Dune” as a feature film has sparked again the conversation of Islamic motifs in many sci-fi novels and films. But Islam itself has an intriguing history of UFOs and belief in alien life, according to historian Jörg Matthias Determann.

In his book “Islam, Science Fiction and Extraterrestrial Life: The Culture of Astrobiology in the Muslim World,” Determann, a professor at Virginia Commonwealth University in Qatar, argues the Islamic tradition has generally been supportive of the idea of extraterrestrial life and the scientific search for it.

“Many people think that Muslim cultures have been oriented toward the past,” said Determann, “holding on to old customs and traditions, adhering to the sharia, and nostalgic about a medieval Golden Age. In contrast, I would like to show Muslims who have been highly creative, imaginative, open-minded and future-oriented.”

In the Quran’s first verse, God is referred to as “rab al-Alamin” or the “lord of the worlds,” a  phrase repeated by hundreds of millions of Muslims around the world in their daily prayers. Yet, there is more meant by the phrase than a reference to the afterlife, according to Determann.

“The Qur’an uses the plural rather than the dual form,” Determann wrote in an email to RNS, “Rabb al-‘Alamin” (Lord of the three or more Worlds) rather than “Rabb al-‘Alamayn” (Lord of the two worlds). This idea of plurality of worlds was picked up by Islamic writers over the centuries, Determann notes in the book, including Persian-speaking Islamic thinkers and writers such as al-Biruni, Nizami Ganjavi and Ibn Sina, or “Avicenna,” as he is referred to in the West.

Importantly, the Quran also refers to jinn as a parallel but sentient form of life. As Determann points out, the existence of jinn in the Quran has served as another potential theoretical framework for extraterrestrial life — and not only by some Muslims. UFO journals published in the West have highlighted certain sections of the Quran as further signs of the existence of extraterrestrial life.

In the United States, UFOs feature in the beliefs of the Nation of Islam, which the book describes as the “longest-lasting Muslim UFO movement.”

Nation of Islam leader Elijah Muhammad taught his followers about a UFO called the Mother Wheel or Mother Plane, based in part on a biblical passage from the book of Ezekiel. His son and successor attempted to disband many aspects of the Nation of Islam and move its followers toward Sunni Islam. However, influential leader Louis Farrakhan rejected these moves and worked to re-establish the Nation of Islam in the late 1970s. As the new leader of the movement, Farrakhan later claimed he was taken aboard a UFO during a 1985 trip to Mexico, where he met Elijah Muhammad, who had been cured of his past ailments by the aliens on board. 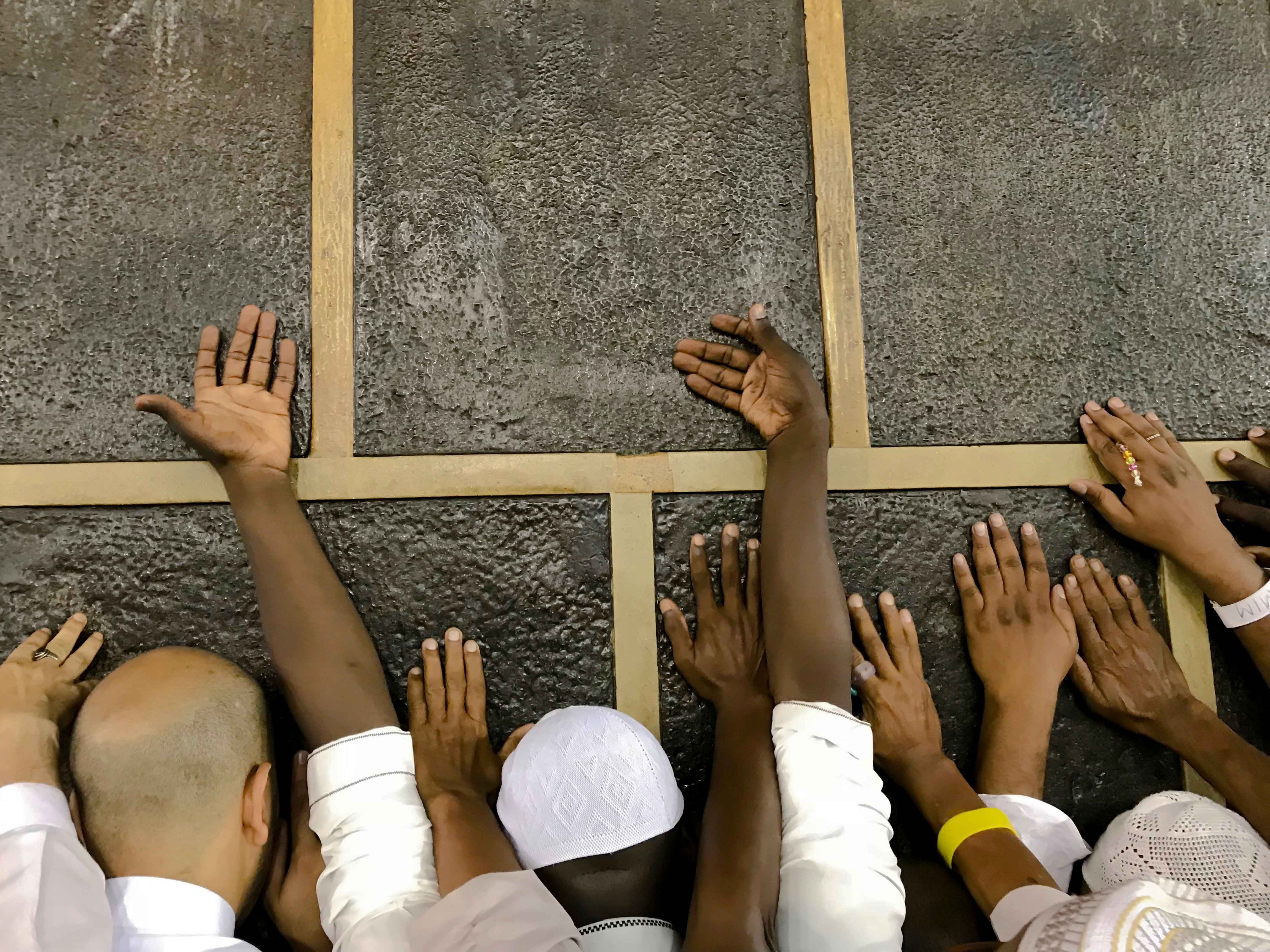 Muslim pilgrims touch the Ka’aba stone, the cubic building at the Grand Mosque, as they pray ahead of the annual Hajj pilgrimage in the Muslim holy city of Mecca, Saudi Arabia, Friday, Aug. 17, 2018. (AP Photo/Dar Yasin)

Islam may have an even more direct link to the extraterrestrial, according to Determann. Many pilgrims to Mecca make an effort to touch or kiss a black stone encased in silver found in one corner of the Ka’aba. Many Muslim and non-Muslim researchers have long speculated the Black Stone of the Ka’aba may be either a meteorite or an impactite. Turkish UFO researcher Haluk Sarıkaya has gone one step further, suggesting the stone may have been sent to Earth by a spacecraft.

Fictional aliens have also enjoyed popularity in many Muslim cultures, notes Determann in several chapters of the book, including Malaysia, the Middle East, Iran and Turkey. American sci-fi films like “Star Wars” have had a deep cultural impact across the globe. In Malaysia, “Star Wars” was remade in the form of a traditional shadow puppet play. In Egypt, novelist Ahmed Khaled Tawfik used characters armed with lightsabers and even named a character Princess Leia in one of his novels. Tawfik’s universe also includes a spacecraft referred to as the “F-1600,” a reference to the F-16 fighter jets flown by Egyptian and American air forces. Determann points out that the F-16 was named the “Viper” by its early pilots — in reference to a vessel in the sci-fi television series “Battlestar Galactica” (itself partly inspired by Mormon ideas).

“Frank Herbert’s ‘Dune’ series of novels and the ‘Star Wars’ films draw heavily on the Middle East in their building of plausible desert worlds like Arrakis or Tatooine and ideas within Islamic cultures,” Determann said. In both cases, Sufi Islamic religious ideas influenced the portrayal of the protagonists, be they Fremen in the case of “Dune” or Jedi knights in the case of “Star Wars.”

In the Middle East, in particular, science fiction became an outlet for political criticism. The thinly veiled troubled tyrants on distant worlds of many Arabic science fiction novels were stand-ins for the military dictators closer to home. Determann’s book includes one intriguing example of Muslim Brotherhood members, who, while in prison, embraced science fiction as a medium for dissent — even recording portions of a play about a journey of discovery to Mars on cigarette cartons.

“Muslims have been highly creative, imaginative, open-minded and future-oriented, as my book shows,” said Determann. “Whether as scientists probing the edges of what we know (by searching for life on other planets), worldbuilders (by creating science fiction books, films and video games), technology enthusiasts, geeks and, yes, nerds.”