(RNS) — I admit it. As I sat in the darkened theater watching Steven Spielberg’s new adaptation of “West Side Story,” I got a little teary.

Add Tony Kushner, mercifully still alive, who wrote the revision — and you are already more than half your way to a minyan.

And to that “West Side Story” minyan, let us also add an invisible presence who was very much alive in the original version.

I am talking about Doc, who owned the drugstore where Tony worked, and who served as a voice of reason. Doc was Jewish — stereotypically so.

Kushner created a new character, Valentina, Doc’s widow, the amazing and ageless Rita Moreno, who had played Anita in the original version.

I appreciate the racial elements of this new version of “West Side Story” — the need for real Puerto Rican actors to play Puerto Rican roles (and not the white actors in brown faces in the original, now-60-year-old movie).

I appreciate the need not to have subtitles on the screen when the Puerto Ricans are speaking Spanish — as a way of scraping away at English language hegemony (even, and/or especially, risking the temporary annoyance of the many audience members who do not understand Spanish).

So, too, I appreciate the role of Anybodys — who, in the original, was a “tomboy,” but who appears here as a trans man.

So, yes: This is a version of “West Side Story” that understands the struggles of 1957 through the sociological lens of 2021.

But, I do not understand why, in 2021, Tony Kushner needed to erase Doc from the story.

Of course, create a new role for Rita Moreno, that of a strong Latina woman.

But Doc’s death, and therefore disappearance? The deliberate removal of a harmless and sweet Jewish character? 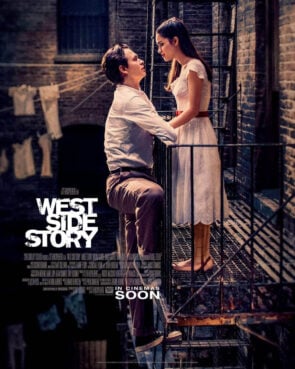 But there is another Jewish presence in the film — who never appears in the film.

The clue to his unspoken, unacknowledged presence comes in the opening segments, as we see the construction of Lincoln Center. The West Side looks like a war zone, with wrecked buildings and bulldozers. He appears, invisibly, in the references to the new construction, to the coming eviction of the current residents, of the coming gentrification of the neighborhood, as it begins to morph into the cultural center of the new West Side, of the luxury apartment buildings where white ethnics could not afford to live and where the only Puerto Ricans would be the doormen.

I am referring to Robert Moses, one of the most powerful figures in the history of not only New York, but the United States.

Robert Moses was the master dreamer, shaper and builder of New York — a man whose projects utterly transformed the state. He is the subject of a magisterial biography by Robert Caro: “The Power Broker: Robert Moses and the Fall of New York.” Never before, and never since in the history of this nation, has one individual had so much unbridled and unchecked power.

Robert Moses created both the 1939 and 1964 World’s Fair. He persuaded the United Nations to locate on the east side of Manhattan. He designed much of the New York expressway and bridge system. He designed the park system. His design of the expressways and parkways ensured that Long Island would become car-dependent.

It need not have been that way. The Long Island suburbs could have wound up like the close-in London suburbs — pedestrian and public-transportation friendly. But, Robert Moses sealed their fate.

His vision was overwhelming. New Yorkers will know what I am describing. Had he succeeded in building the bridge from Oyster Bay, Long Island across the Sound to Rye, it would have connected to the Cross Westchester Expressway, crossed the Hudson, continued south through New Jersey, crossed the Verrazano Narrows, and connected to the Belt Parkway — thus creating a beltway around New York.

There was vision and there was grandiosity and there was unbridled power. There was also his unfettered bigotry. He designed Jones Beach but did not want Blacks to visit. Surmising that they would only be able to reach the beach through public transportation, he mandated that overpasses on Long Island parkways be too low to accommodate bus traffic.

Robert Moses was the additional Jew I would add to the list of “West Side Story” Jews.

Alas, he would have bristled at that.

Born into a wealthy Jewish family, Moses loathed his Jewish identity, eschewing all Jewish connections and loyalties as to render them as invisible as, well, Doc in the new version of the film.

Case in point: When Moses designed the Cross Bronx Expressway (my definition of hell on earth), he deliberately eviscerated the lower-middle-class Jewish neighborhood of East Tremont.

That was how Moses rolled — and you can see that in the movie Motherless Brooklyn, in which Moses appears in the guise of Moses Randolph (Alec Baldwin), who destroys working class neighborhoods in New York.

And, yes, finally: Robert Moses was the driving force behind the renovation of the West 60s. He helped destroy San Juan Hill, a historic Black neighborhood, in order to build Lincoln Center. San Juan Hill was the location of the first public housing projects in New York. This was one of the places where jazz was born. Consider some of its residents: Thelonious Monk and James P. Johnson, creator of the Charleston.

Moses evicted 7,000 Black and Puerto Rican families from San Juan Hill. The original “West Side Story” was filmed in its ruins.

Robert Moses was a real piece of work — paradoxically, without whom contemporary New York would not have existed. Historians will continue to debate his role.

But, as for me, Robert Moses was the unseen “Jew-ish” presence in “West Side Story.” His decimation of those West Side neighborhoods and communities formed the back story behind the rumbles and the romance. The dislocation he created was a primary reason for the tensions between the Jets and the Sharks — ethnic whites and Puerto Ricans fighting over turf, and over the last vestiges of their old lives.

What did you do with Doc?

And why did you do it?

News
‘Apostles of Change’ tells how secular Latino activists protested by seizing sacred spaces
Follow us on Facebook!
Submit your photos to RNS