Tutu was diagnosed with prostate cancer almost two decades ago.

The feisty spiritual leader of millions of Black and white South Africans seized every opportunity at home and abroad to rail against the racially oppressive regime that stifled his country for decades. His struggles earned him the Nobel Peace Prize and appointment to the leadership of a commission that sought to reveal the truth of apartheid’s atrocities.

“There’s no person on the face of the earth — Nelson Mandela would have been the other — that has had the kind of moral compass and exemplary mandate I think that the archbishop has,” said Alton B. Pollard III, former dean of Howard University’s School of Divinity.

In later years, Tutu carried his work for justice into other areas beyond racial reconciliation — from AIDS to poverty to gay rights.

“All, all are God’s children and none, none is ever to be dismissed as rubbish,” he said in 1999 to the “God and Us” class he taught as a visiting professor at Emory University’s Candler School of Theology. “And that’s why you have to be so passionate in your opposition to injustice of any kind.”

Long before South Africa elected its first democratic government in 1994, Tutu dreamed of and spoke fervently about “what it will be like when apartheid goes.”

But there were times in public speeches and in interviews when the cleric doubted whether, after decades of agitating for social justice, he would live to witness the decay of apartheid.

During the 1970s and ’80s, when other Black leaders critical of white majority rule were being violently snuffed out or silenced, Tutu’s prominence in the church made his one of the few Black voices strong enough to resonate around the world. FILE – Former South African President Nelson Mandela, right, reacts with Archbishop Desmond Tutu during the launch of a Walter and Albertina Sisulu exhibition, called, ‘Parenting a Nation’, at the Nelson Mandela Foundation in Johannesburg, South Africa, Wednesday, March 12, 2008. Tutu, South Africa’s Nobel Peace Prize-winning activist for racial justice and LGBT rights and the retired Anglican Archbishop of Cape Town, has died at the age of 90, it was announced on Sunday, Dec. 26, 2021. An uncompromising foe of apartheid, South Africa’s brutal regime of oppression against the Black majority, Tutu worked tirelessly, but non-violently, for its downfall. (AP Photo/Themba Hadebe, File)

But at times, not even his stature in the church or powerful international religious connections were enough to keep the government at bay or from confiscating his passport. Protests by the world’s leading clerics, including the Archbishop of Canterbury, came but failed to buffer Tutu from the brutal regime.

Tutu said a disciplined prayer life helped him through apartheid and continued to sustain him decades later.

“I could myself not have survived had I not been buttressed by my spiritual disciplines of prayer, quiet and regular attendance at the Eucharist,” he told Religion News Service in 2011.

His bold protests against racial segregation and public campaigns for international economic sanctions made Tutu a thorn in the side of the South African government. But to many Blacks in the country, Tutu wasn’t radical enough. Some even chided him for being dedicated to crafting a nonviolent resolution with whites for racial reconciliation in South Africa.

RELATED: Mural of South Africa’s Desmond Tutu is fixed for his 90th

Tutu never set out to be a controversial figure or even a priest.

In fact, as a child, Tutu was baptized a Methodist, but he later converted to Anglicanism with the rest of his family in Klerksdorp, South Africa, where he was born. Tutu, the son of a schoolteacher, wanted to become a physician, but with no money or scholarships available, he enrolled in a teacher-training program.

His career as a teacher was short-lived. After resigning from his teaching post in protest of the government’s educational policies toward Blacks, Tutu turned to the priesthood and to the church.

His would be a career of firsts. In 1975 Tutu was named the first Black Anglican dean of Johannesburg and in 1976 he was elected bishop of Lesotho, an independent African country encircled by South Africa. Two years later he became the first Black general secretary of the South African Council of Churches. Tutu used his post as general secretary as a platform to peacefully advance the anti-apartheid movement.

In 1984, the Anglican bishop was teaching in New York on sabbatical when he learned that he won that year’s Nobel Peace Prize for his nonviolent crusade against apartheid. His fellow Black South Africans bestowed a rapturous welcome on the laureate when he returned home and it was to them Tutu dedicated his prize.

“This award is for you, the 3 1/2 million of our people who have been uprooted and dumped as if you were rubbish,” said Tutu in a speech delivered at the headquarters of the South African Council of Churches.

It was a stellar year for Tutu. Just one month after winning the Nobel Prize, he was elected the first Black Anglican bishop of Johannesburg. There were expectations that Tutu’s episcopacy would squelch his passion and protest. That never happened. 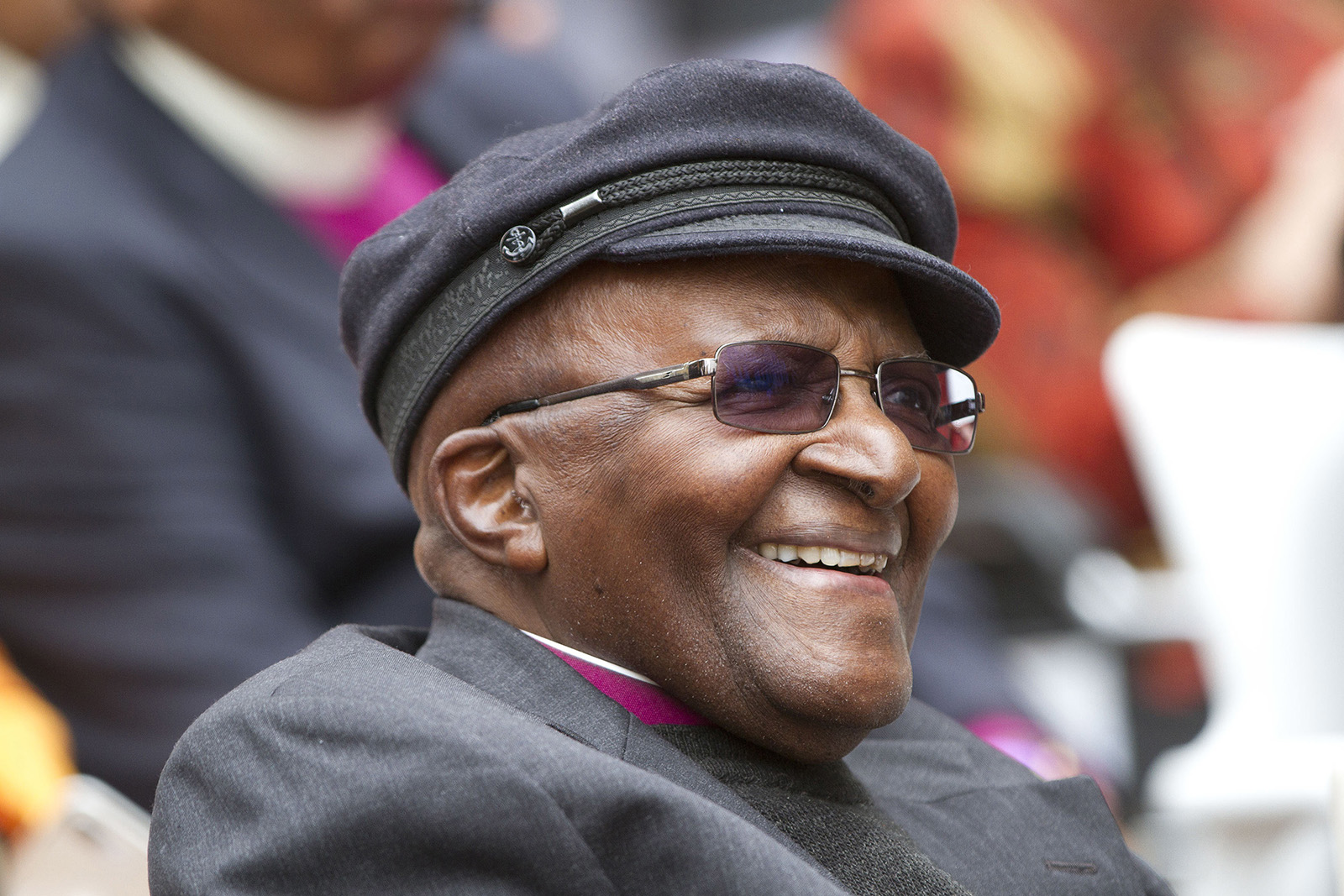 In 1996, a decade after he was elevated to Anglican archbishop of Cape Town and primate of much of southern Africa, Tutu laid aside the staff of his episcopate, but he did not abandon the work that consumed much of his adult life — bringing freedom and healing to a racially fractured South Africa.

Tutu’s quest for a free South Africa put him on the front line of politics and protest, but he often dismissed claims that he had political ambitions. He would respond to the curious by saying: “It just so happens that I am myself black, but the most important thing about me is that I am a Christian leader in South Africa at a critical period in its history. I have been given the ministry of reconciliation.”

Content with being “the priest,” even in the new South Africa, Tutu was determined to maintain what he called a “critical distance” from the government that being “the politician” wouldn’t allow. Said Tutu: “If it is evil, it is evil, and I’m going to tell you so.”

In the mid-1990s, Tutu was chosen to head South Africa’s Truth and Reconciliation Commission. Despite his illness and cancer treatment, Tutu kept watch over the commission as victims, perpetrators, the police and the country’s former president aired the misdeeds of the era he fought against.

As the world watched the commission’s proceedings, television cameras often caught the quick-witted Tutu sobbing audibly over the recounting of some horrible atrocity that was being disclosed.

Years later, he continued to preach about the need for reconciliation and forgiveness.

“(F)orgiving is a gift to the forgiver as well as to the perpetrator,” he told RNS in an interview in 2014, when he co-authored “The Book of Forgiving” with his daughter Mpho Tutu. “As the victim, you offer the gift of your forgiving to the perpetrator who may or may not appropriate the gift but it has been offered and thereby it liberates the victim.”

Tutu was presented with top honors, including the Presidential Medal of Freedom in 2009 from then-President Barack Obama.

“As a man of the cloth, he has drawn the respect and admiration of a diverse congregation,” reads the medal’s citation. “He helped lead South Africa through a turning point in modern history, and with an unshakeable humility and firm commitment to our common humanity, he helped heal wounds and lay the foundation for a new nation.” 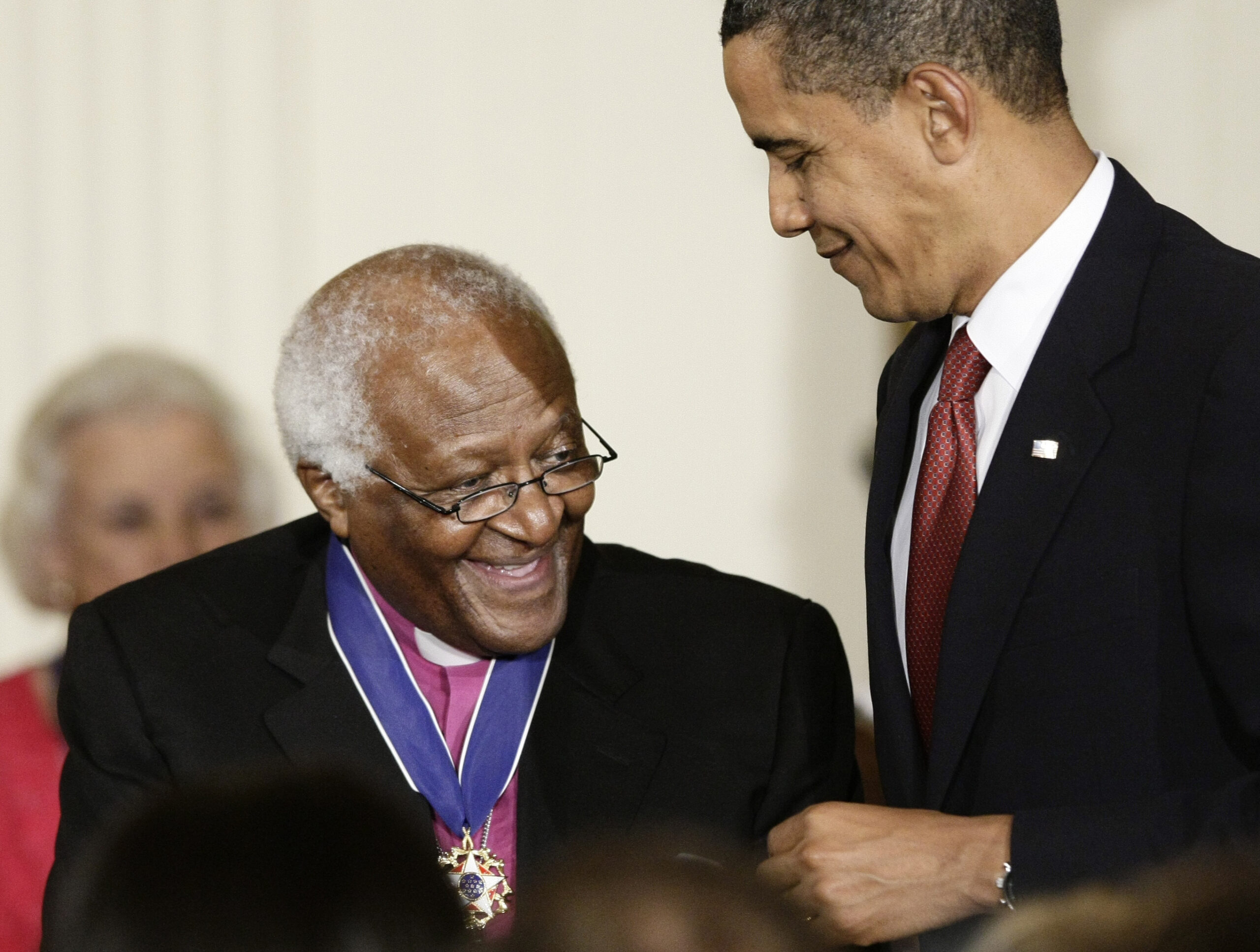 When Tutu was honored four years later with the Templeton Prize, regarded as the most significant award in the field of spirituality and religion, he credited the people of South Africa, as he had with his Nobel win.

“(W)hen you are in a crowd and you stand out from the crowd, it’s usually because you are being carried on the shoulders of others,” he said in 2013.

Tutu was not without his critics, including those who protested commencement speaker invitations from U.S. colleges, in part because of his support of Palestinians and criticism of Israel.

In a 2013 interview with RNS, when the Desmond Tutu Center at Butler University and Christian Theological Seminary was announced, Tutu blamed God for his outspokenness on issues such as gay rights and the Middle East.

“I don’t think, ‘What do I want to do today? I want to speak up on gay rights,’” he said. “No. It’s God catching me by my neck. I wish I could keep quiet about the plight of the Palestinians. I can’t! The God who was there and showed that we should become free is the God described in the Scriptures as the same yesterday, today and forever.” 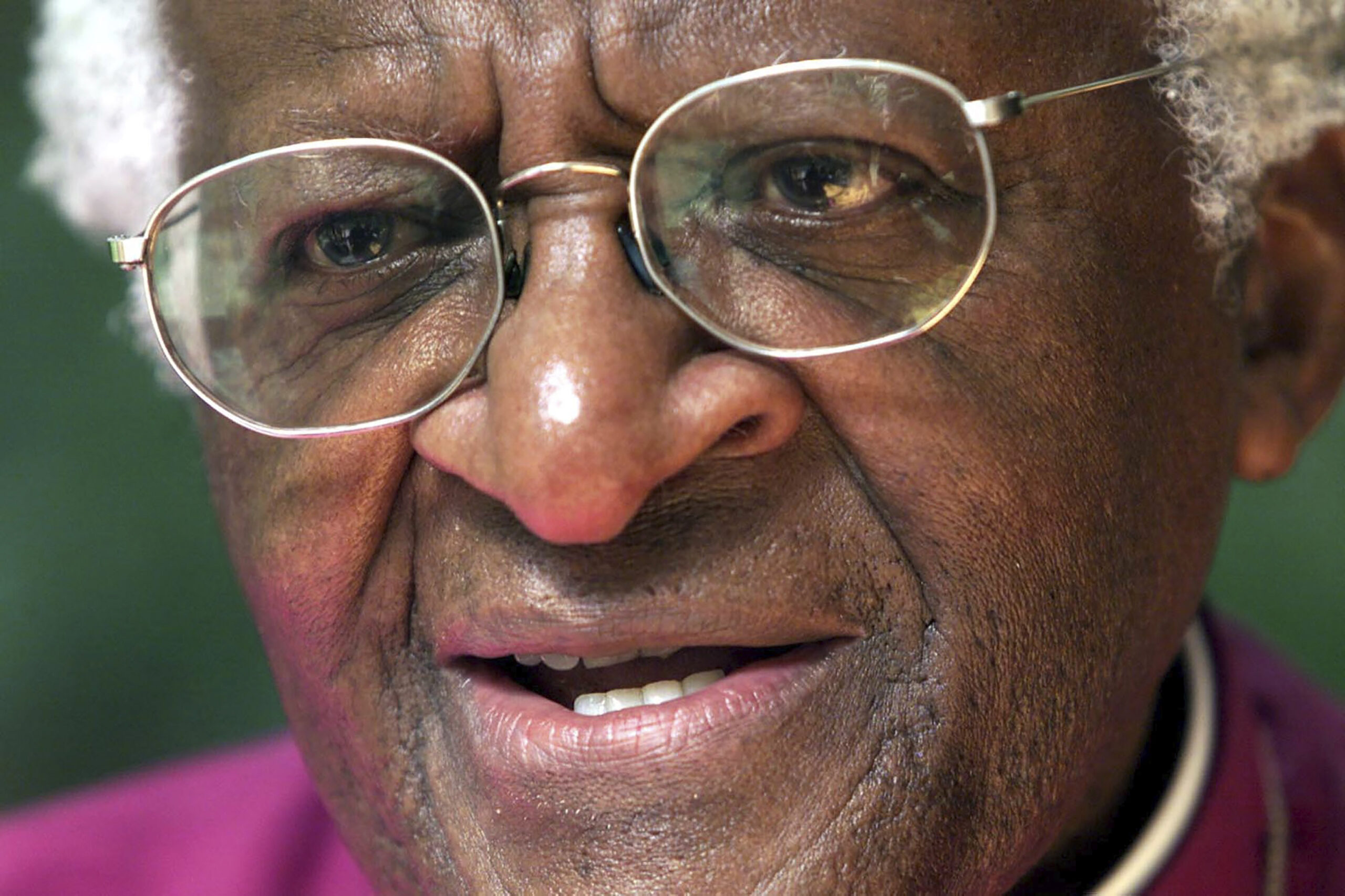 Vanderbilt Divinity School Dean Emilie Townes said Tutu, with his “refusal to bend to injustice,” became a pastor to the world.

“He has been such a bright light for hope and justice and love for so many of us,” said Townes. “It’s hard to think of a world without him. But one of the things that he taught so many of us is we have to find that bright light within ourselves and to take the work he has begun forward.”

Tutu, who was lauded as the conscience of South Africa, lived a life of moral strength, vision and hope that allowed him to serve his church and his people faithfully and at times with peace and humor even in the face of persecution.

In doing his life’s work — opposing apartheid — Tutu knew the cost of
engagement: “If you are doing God’s work, it’s his job. He will jolly well have to look after you. And no one is indispensable.”