Few religious voices need no introduction. Desmond Tutu is one of them.

As the former Archbishop of Cape Town, Tutu became a leading human rights advocate who has championed causes such as poverty, racism, homophobia, sexism, HIV/AIDS and war. He received the Nobel Peace Prize in 1989 and the U.S. Presidential Medal of Freedom in 2009. In his newest work, The Book of Forgiving (co-authored with his daughter, Mpho Tutu), he offers four steps to forgiving and healing:

Here, we discuss this process, how his experiences with apartheid relate to it, and how he answers those who’ve criticized it.

RNS: Your first step to forgiveness and healing is to “admit the wrong and acknowledge the harm.” Doesn’t that just dredge up old pain?

DT: For both the offender and the victim, the pain is there, often unacknowledged and that is when it can cause harm through festering. When I ignore a physical wound, it does not go away. No, it festers and goes bad. It may be initially painful to open up a wound, but then it can be cleaned out and cauterized. And you can pour a healing balm.

RNS: Another step you list is “asking for…and granting forgiveness.” How do you forgive someone who doesn’t think they’ve done anything wrong?

Jesus prayed that His Father should forgive the men who were nailing Him to the cross even as they were doing so; He even found an excuse for them and so really offered His forgiveness thereby. He did not wait until they asked for His forgiveness. Of course, it would have been far better if they had been penitent and asked for His forgiveness. It was a gift He was giving to Himself as well, which released Him from being filled with self pity, an unhealthy psychological state.

It would be grossly unfair to the victim to be dependent on the whim of the perpetrator. It would make him or her a victim twice over. The gift has been given. It is up to the intended recipient to appropriate it. The outside air is fresh and invigorating and it is always there. If you are in a dank and stuffy room you can enjoy that fresh air if you open the windows. It is up to you.

RNS: In a post entitled, “Why Desmond Tutu is Wrong,” Lesley Leyland Fields suggests that your notion that we forgive “for ourselves” is “killing biblical forgiveness.” She says, “Biblical forgiveness is a gift first to the offender and to Christ.” How do you respond?

DT: I have already pointed how it is important, very important to give oneself that gift, of letting go of resentment and anger which diminish oneself. The self is quite important in who we are. Jesus quoting the Torah answers the question, “Which is the greatest law?” by saying, “The first is Thou shalt love The Lord thy God with all….” And then He adds, “The second is, Thou shalt love thy neighbor as thyself”. That is the highest approbation one can hope for about a proper self-love.

We know the havoc that has been caused by those with a feeble self image, weak self esteem. They will usually throw their weight around trying to fill the hollow inside them. Offering forgiveness prevents us from being destroyed by a corrosive resentment. It helps us grow in being magnanimous.

RNS: Fields also says that Biblical forgiveness is “not about letting go of the past, but about redeeming the past.”

DT: If “redeeming the past” means “not allowing the past to haunt you, to have a stranglehold on you” then I’m happy to let her use her phrase. 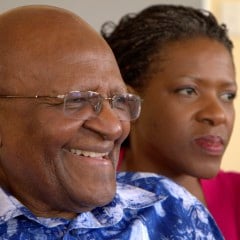 RNS: You mention that sometimes the final step is “releasing” rather than “renewing” the relationship. How do you know which is the right path?

DT: There are the fairly obvious ones: an abusive relationship should be easy to identify though often one of the most difficult to end; or one where you are likely to be misled into risky behavior–like excessive drinking, experimenting with dangerous substances, etcetera. But there are other more subtle ones such as friendships that can lead to infidelity and other things.. In the end, we know the relationships we should end.

RNS: Looking back on your experience with the healing process in South Africa, which step was most difficult for you and your countrymen and women?

DT: For most people, it was hearing the gory details of how a loved one was killed: “We gave him drugged with coffee and shot him in the head and then we burned his body which took maybe eight or so hours. Whilst that was happening, we drank beer and had a barbecue.”

What could have happened to their humanity that they could do this?

I think for perpetrators, it was having to own up under the glare of TV lights that they committed such dastardly deeds when they had been thought to be respectable, God-fearing persons. But we were always bowled over by the magnanimity of victims, both black and white, who were able to forgive some of the most dastardly atrocities. Had they not, South Africa would have been overwhelmed by a horrendous, racial bloodbath.