(RNS) — I absolutely loathe winter. There, I said it.

It’s partly about the cold, I’m sure. I grew up in the frigid climate of northwestern Illinois back when a Midwestern winter could kill a person. Think Laura Ingalls Wilder’s “The Long Winter” and you’ll know what I mean.

In the 1970s when I was little, we had several of the worst winters on record in succession. It was epic. School was out for weeks, which can feel like a great boon when you’re 7. Even if you already hate winter by that time of your childhood — and I certainly did — strings of snow days are nothing to sneeze at.

But even when you’re making the best of winter by building a fort or making a snow angel or downing your 300th cup of hot cocoa, there’s an underlying apprehension and isolation about winter times. You calculate how close your closest neighbors are and whether they’d be willing to use their enviable steamroller of a snowplow to excavate your front door, should it come to that.

Now I’m an adult, and two things have gotten better. The first is that I live farther south, almost in Kentucky, and winters are much milder here. The other is global warming, which I’m not supposed to be glad about because I do understand that it’s going to destroy us all. I get it, I do. But in the meantime I am going to look for silver linings wherever I can find them, people.

I can usually stave off my existential dread of winter through the holidays. Heck, that’s why we even have the holidays when we do, with the Christian celebration of Christmas plopped right on top of the winter solstice celebrations pagans used for eons to mark the darkest, darkest night.

I’m not alone in my antipathy for wintertide. One of my favorite Christmas carols was written as a poem by someone I suspect was also a winter-hater:

In the bleak midwinter

Snow was falling, snow on snow

The poem’s imagined scene is in no way relatable to the actual birth of Jesus it’s supposed to be describing, which may have happened in the spring, if shepherds were tending their flocks outside. The carol was written by an Englishwoman who was a lot more influenced by her own icy surroundings than she was concerned with pesky details like historical accuracy. But the spirit of the poem rings true to anyone who has lived through the unyielding and seemingly endless reality of an implacable earth that cares not whether the creatures that depend upon it live or die.

Yeah, you can tell I succumb to some dark thoughts this time of year. 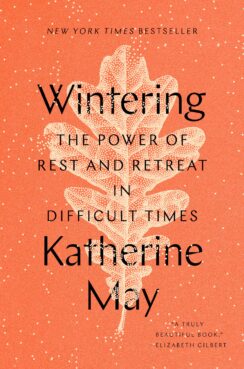 Last winter, I discovered a book that helped to shift my perspective a bit, so as I sit here at the head of the new year and look ahead to many weeks of stubborn winter, I’m reading it again.

In “Wintering: The Power of Rest and Retreat in Difficult Times,” memoirist Katherine May admits to experiencing some of the fear and loneliness many of us associate with winter. While the book is grounded in the physical experience of winter — there are chapters chronicling her experiences in December, January, February and so on — it’s more about winter as a metaphor.

And it’s that metaphor that makes us afraid.

“Everybody winters at one time or another,” May explains at the beginning of the book, and “some winter over and over again.” She defines winter as any “fallow period in life when you’re cut off from the world, feeling rejected, sidelined, (or) blocked from progress.” Life’s winters are never chosen, which is what makes them so hard. We’re moving along nicely and then, bam, the relationship ends, or the diagnosis is cancer. We flounder, not knowing how to get our bearings when we have slipped and fallen so spectacularly on life’s metaphorical ice.

For me, the genius of the book is the way May deftly explores these depressing and frightening psychological times by researching how the natural world deals with the physical realities of winter. Nature, she says, treats winter as an opportunity, a necessary fallow time. There’s a whole chapter on sleep in which she explores the hibernation habits of dormice, which are apparently a thing where she lives in the U.K. She ventures to Tromsø, Norway, to glimpse the northern lights; dissects children’s literature for clues about winter as a harbinger of change (in books like “The Lion, the Witch, and the Wardrobe” and “The Dark Is Rising,” snowfall is “the trigger for tables to turn”); and meets people who conquer depression by swimming in frigid waters in January.

But May’s book, while hopeful, isn’t naïve or relentlessly cheerful. Life’s winters suck, she makes clear. They just do. She resists the tendency to “move on” prematurely from heartache, promulgated by people who seem at root deeply afraid of darkness:

The subtext of these messages is clear: Misery is not an option. We must carry on looking jolly for the sake of the crowd. While we may no longer see depression as a failure, we expect you to spin it into something meaningful pretty quick. And if you can’t pull that off, you’d better disappear from view for a while.

Winter, she writes, is a chance for us to breathe. To accept the reality that we can’t do everything we want to, and that this is OK. In winter we realize, to our chagrin, we are not in charge, that earth can be hard as iron, that the world is not necessarily on our side.

We have a choice: We can kick against it, or we can learn what winter has to teach. May wisely chooses the latter. What she has learned to do is this:

I recognised winter. I saw it coming (a mile off, since you ask), and I looked it in the eye. I greeted it and let it in. I had some tricks up my sleeve, you see. I’ve learned them the hard way. When I started feeling the drag of winter, I began to treat myself like a favoured child: with kindness and love. I assumed my needs were reasonable and that my feelings were signals of something important. I kept myself well fed and made sure I was getting enough sleep. I took myself for walks in the fresh air and spent time doing things that soothed me. I asked myself: What is this winter all about? I asked myself: What change is coming?

So that’s what I’m going to try to do differently this year, as the bleakness of winter sets in.