WASHINGTON (RNS) — The liberal group Catholics for Choice staged a protest outside the Basilica of the National Shrine of the Immaculate Conception Thursday evening (Jan. 20), projecting messages in support of abortion rights onto the building’s walls as an anti-abortion vigil was in progress inside.

Members of Catholics for Choice assembled near the basilica ahead of the protest, which occurred the evening before the March for Life, a massive annual anti-abortion rally in Washington. Shortly before they began the demonstration — which organizers said was conducted with a permit — the group’s president, Jamie Manson, led them in prayer.

“God of compassion, be present to all who have had abortions, may they feel your love,” she said. “Be with all abortion providers, may they be safe. Sustain them with your comfort, and your courage.”

She also prayed for those who would participate in the March for Life, asking God that “they listen to the voices of those who have had or provide abortions.” 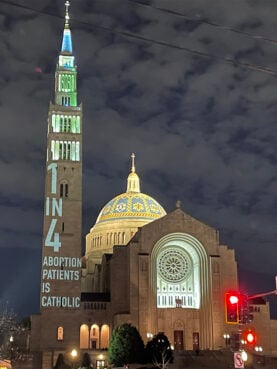 Messages voicing support for abortion rights are projected onto the Basilica of the National Shrine of the Immaculate Conception in Washington, D.C., Thursday, Jan. 20, 2021. The messages were part of a protest staged by the liberal advocacy group Catholics for Choice. RNS photo by Jack Jenkins

The group then used a projector to illuminate the facade of the basilica across the street with slogans such as “Pro-choice Catholics you are not alone,” “Stop stigmatizing; Start listening” and “Mi cuerpo, mi decision” — “my body, my decision” in Spanish.

Another image emblazoned the words “Pro-choice Catholics” on a Christian cross, and another declared “1 in 4 abortion patients is Catholic” — a reference to a 2016 Guttmacher Institute report that found 24% of women who procure abortions identify as Catholic.

Reached for comment Friday morning about the protest, representatives for the Basilica provided a statement from Cardinal Wilton Gregory, who oversees the Archdiocese of Washington and chairs the Basilica’s board.

“The true voice of the Church was only to be found within The Basilica of the National Shrine of the Immaculate Conception last evening,” the statement read. “There, people prayed and offered the Eucharist asking God to restore a true reverence for all human life. Those whose antics projected words on the outside of the church building demonstrated by those pranks that they really are external to the Church and they did so at night – John 13:30.”

The protest also stoked reaction on social media, with San Francisco Archbishop Salvatore J. Cordileone quote-tweeting a picture of the protest with the words: “The attempted desecration is enormous. Diabolical. Mother Mary, pray for them, now and at the hour of death. Amen.”

Cordileone, a known conservative among U.S. bishops, has suggested denying Communion to Catholic politicians who back abortion rights — including President Joe Biden — while invoking the Catholic Church’s longstanding opposition to abortion. The issue became a subject of heated disagreement among bishops as they debated a document on the Eucharist throughout 2021, with some mentioning Biden by name. The final document, approved in November, did not single out politicians.

Despite the controversy, when Biden met with Pope Francis last year, the president said the pontiff told him he is a “good Catholic” who should continue to take Communion.

Catholics for Choice members stood quietly during their protest on Thursday, some holding electric candles and sharing texts from friends praising their activism. Inside the basilica — the largest Catholic house of worship in North America — people participated in the National Prayer Vigil for Life, a few trickling in and out as the protest continued.

Minutes after turning on the projector, a man wearing a red, white and blue scarf approached the group and began yelling, saying, “There’s no such thing as a pro-choice Catholic.” After he noted the Catholic Church’s opposition to abortion, he declared: “Pro-choice Catholics are going to hell.”

When protesters quietly offered to pray with him, he rebuked them, saying, “Why would I pray with you? You’re not Catholic.” A short while later, after he was approached by police and security personnel, he walked away.

In an interview with Religion News Service, Manson noted that a majority of U.S. Catholics — 55% according to Pew Research — believe abortion should be legal in all or most cases. In addition, a 2019 Pew survey found that an even greater majority of Catholics (68%) do not want the Supreme Court to overturn Roe v. Wade, the landmark 1973 ruling that legalized abortion nationwide. 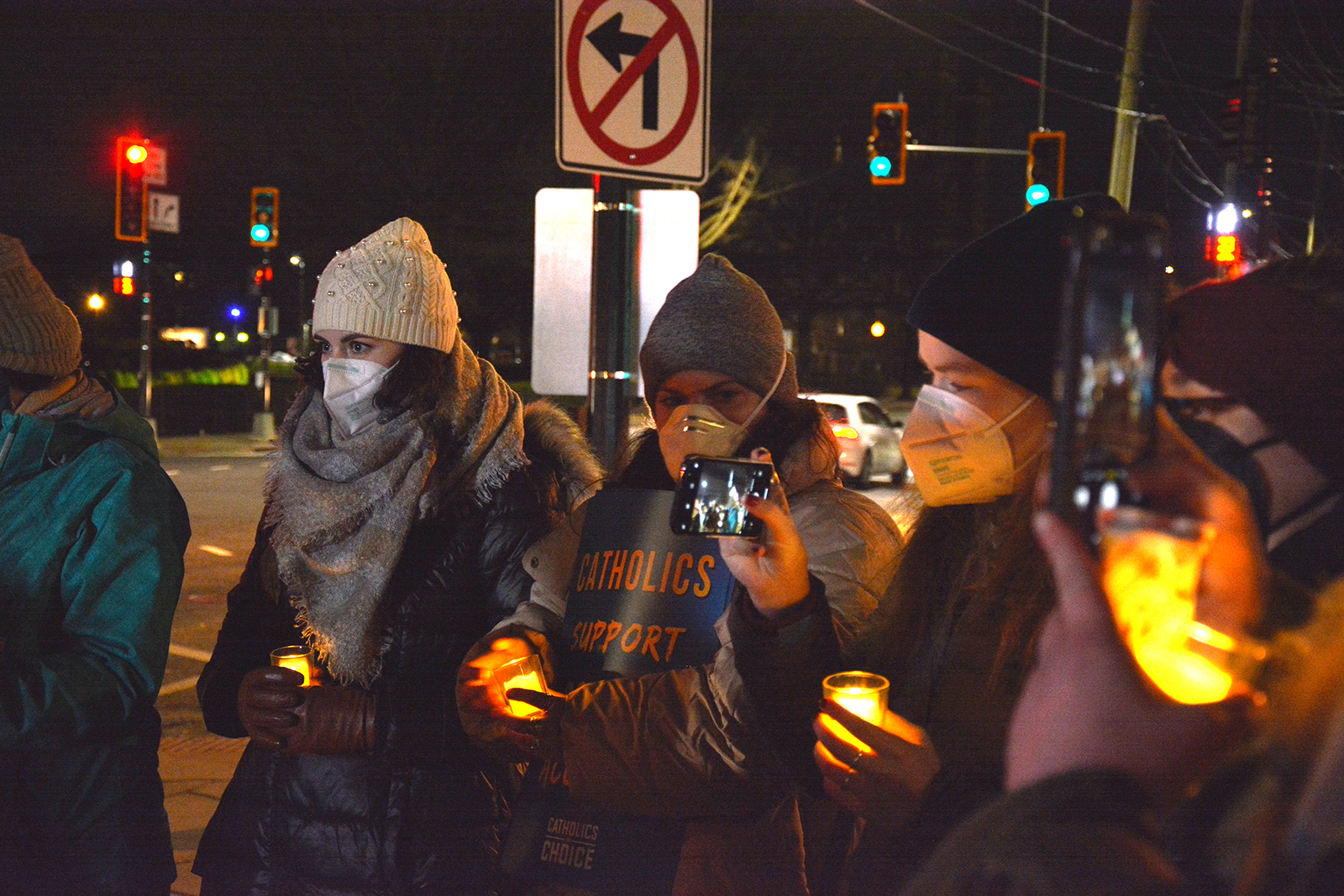 People with Catholics for Choice gather while projecting abortion rights messages onto the Basilica of the National Shrine of the Immaculate Conception in Washington, D.C., Thursday, Jan. 20, 2021. RNS photo by Jack Jenkins

“We wanted to be out here to say the March for Life does not speak for us,” she said. “The March for Life is not representative of the convictions of the vast majority of Catholics in the United States.”

The Supreme Court is expected to rule this summer on Dobbs v. Jackson, an abortion case that could overturn or gut Roe v. Wade. When activists assembled outside the court in December during oral arguments in the case, faith groups were well represented among anti-abortion advocates and those who support abortion rights — including Catholics for Choice.

Manson called it a “frightening time” for activists like herself, but she is primarily concerned for women who have had or are seeking abortions.

“Obstructions to abortion can disproportionately impact the poor, people of color, LGBTQ people, people who are already vulnerable or in states of profound powerlessness,” she said “They’re going to suffer more — the poor will get poorer; the sick will get sicker.”

“We feel a profound moral obligation to be engaged in this issue.”

Manson added that she hoped the protest could spark dialogue with church officials, saying, “I want them to hear abortion stories.”

A few minutes later, as the group began to conclude the protest, dozens of churchgoers began to exit the basilica. Organizers left up the lights for a few more minutes, watching as the worshippers craned their necks to see the words.