(RNS) — President Joe Biden told reporters on Friday (Oct. 29) that when he met with Pope Francis earlier in the day, the pontiff told the president he was a “good Catholic” and should continue taking Communion.

The pope’s alleged remarks constitute an apparent rejection of some conservative Catholics in the U.S. — including some U.S. bishops — who have suggested Biden be denied the Eucharist because of his support for abortion rights.

Biden, who has long been vocal about his Catholicism, told journalists during a press conference with Italian Prime Minister Mario Draghi that he and the pope did not discuss abortion during their record-setting, more than an hour-long visit earlier in the day.

“We just talked about the fact that he was happy that I was a good Catholic and (to) keep receiving Communion,” said Biden, the U.S.’s second Catholic president.

Biden was then asked directly whether the pope said he should keep receiving Communion, to which he responded: “Yes.”

Biden noted that he did not receive Communion at the Vatican. When asked if he discussed the U.S. Conference of Catholic Bishops with the pope, the president replied: “That’s a private conversation.”

Vatican officials did not immediately respond to a request to confirm the account. 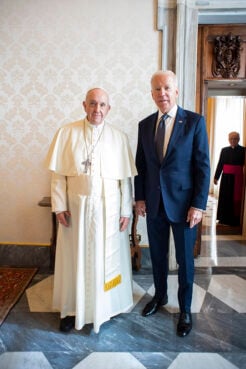 President Joe Biden, right, poses with Pope Francis as they meet at the Vatican, Friday, Oct. 29, 2021. Photo by Vatican Media

News of the pope’s alleged encouragement is likely to frustrate some Catholic bishops in the U.S., where prelates have been locked in a debate for months over whether pro-choice politicians should be denied Communion.

The topic was debated at length in June at the USCCB’s summer meeting, where some prelates singled out Biden by name during the discussion. For example: Michael Pfeifer, a retired bishop from San Angelo, Texas, argued Biden’s abortion policies are tantamount to “infanticide” and referred to the “issue of our Catholic president receiving Holy Communion.”

Similarly, San Francisco Archbishop Salvatore Cordileone has repeatedly suggested he would deny Biden Communion, telling an opinion writer that if the president appeared before him at worship, he hoped Biden would not “create a scene by approaching me to receive Holy Communion.”

Meanwhile, prelates such as the Cardinal Wilton Gregory, head of the Archdiocese of Washington, told Religion News Service in December he would continue to offer Biden the Eucharist despite disagreements over abortion.

“I don’t want to go to the table with a gun on the table first,” Gregory said at the time.

The bishops are slated to produce a document on Communion next month at their fall conference in Baltimore, Maryland, although organizers have insisted it would not be narrowly focused on the topic of politicians and the Eucharist.

Biden was denied Communion by a priest at a Catholic church in South Carolina while running for president in 2019. The priest suggested in a statement to RNS at the time that the rebuke was due to Biden’s abortion views.