VATICAN CITY (RNS) — Setting a record for longest meeting between a pope and a U.S. president, President Joe Biden spent 90 minutes at the Vatican on Friday (Oct. 29), discussing his and Pope Francis’ common interests in climate change and immigration, as well as the distribution of COVID-19 vaccines and health care for the poor.

After the meeting, Biden told reporters that that the pontiff told him he should continue to receive Communion, despite calls from conservatives among the U.S. Catholic bishops to deny Biden the sacrament over his stance on abortion rights.

Biden said Francis told him “He was happy I’m a good Catholic” and that he should “keep receiving Communion.”

The two met as Biden arrived in Italy for the G20 summit of the leaders of the world’s largest economies in Rome, before the president heads to Glasgow, Scotland, for the COP26 conference on climate change. While the two met in 2016 when Biden was vice president, it is their first encounter since Biden was elected president.

The meeting between Francis and Biden was kept tightly under wraps, with press excluded from the greetings and customary exchange of gifts. On Thursday, the Vatican suddenly announced that there would be no live recording of the initial part of the meeting unlike previous papal meetings. 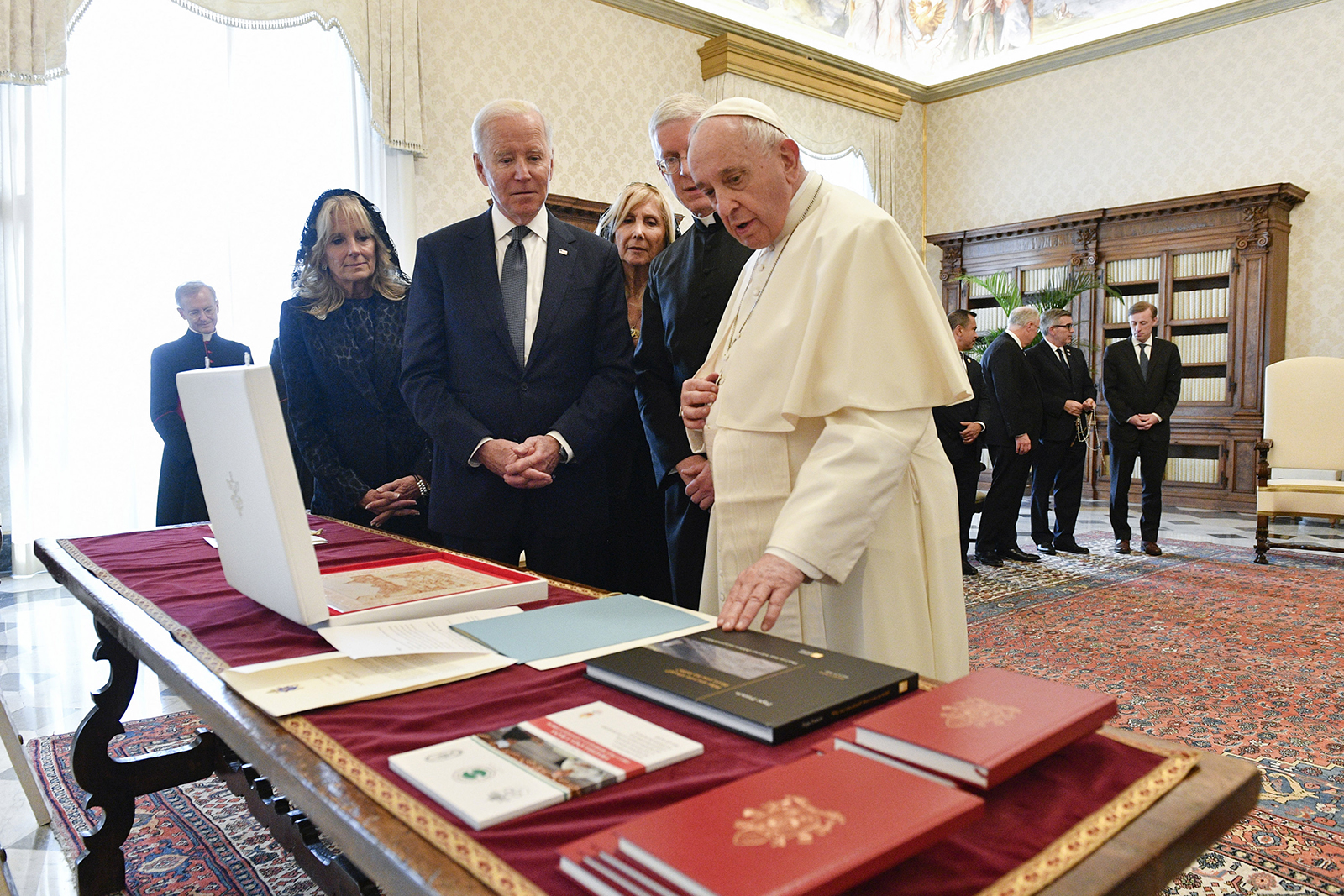 The presidential limousine entered the Vatican through the San Damaso courtyard of the papal palace, and Biden, accompanied by the first lady, Secretary of State Antony Blinken and White House staff, was escorted inside to meet Francis.

“The engagement between the two was very warm,” one White House official said, according to the press pool, adding that “there was laughter and clear rapport between President Biden and Pope Francis.”

@POTUS has finally arrived at the Vatican to meet @Pontifex pic.twitter.com/QCto2DECTi

The pope gave Biden a painting on ceramic tile representing a pilgrim with a finger pointed toward St. Peter’s Basilica. The pilgrim in the image carried a shell, which the Vatican described as “a symbol meaning shelter, refuge from the adversities encountered on the journey of meditation and spiritual growth.”

The pope also gave Biden a collection of his works and a copy of his “Document on Human Fraternity,” which he cosigned in February 2019 with the Grand Imam of Al-Azhar, Ahmad Al-Tayyeb, to promote tolerance and peace between Muslims and Christians.

Biden gave the pope a handwoven liturgical vestment dating back to 1930, richly adorned with symbolic fruits and flowers, and a presidential challenge coin, symbolizing welcoming and honorary membership, calling the pope the “most significant warrior for peace I’ve ever met.”

The president added that his son Beau, who died of cancer in 2015, “would want me to give this to you.”

As he left the company of the pope, Biden could be heard saying to Francis, “God love ya!”

From there, the president met with Vatican Secretary of State Cardinal Pietro Parolin and with Vatican Secretary for Relations with States Archbishop Paul Gallagher. According to the White House, Biden thanked “the Vatican’s active leadership in fighting the climate crisis — both through advocacy and encouraging the climate neutrality of hundreds of Christian organizations worldwide.” 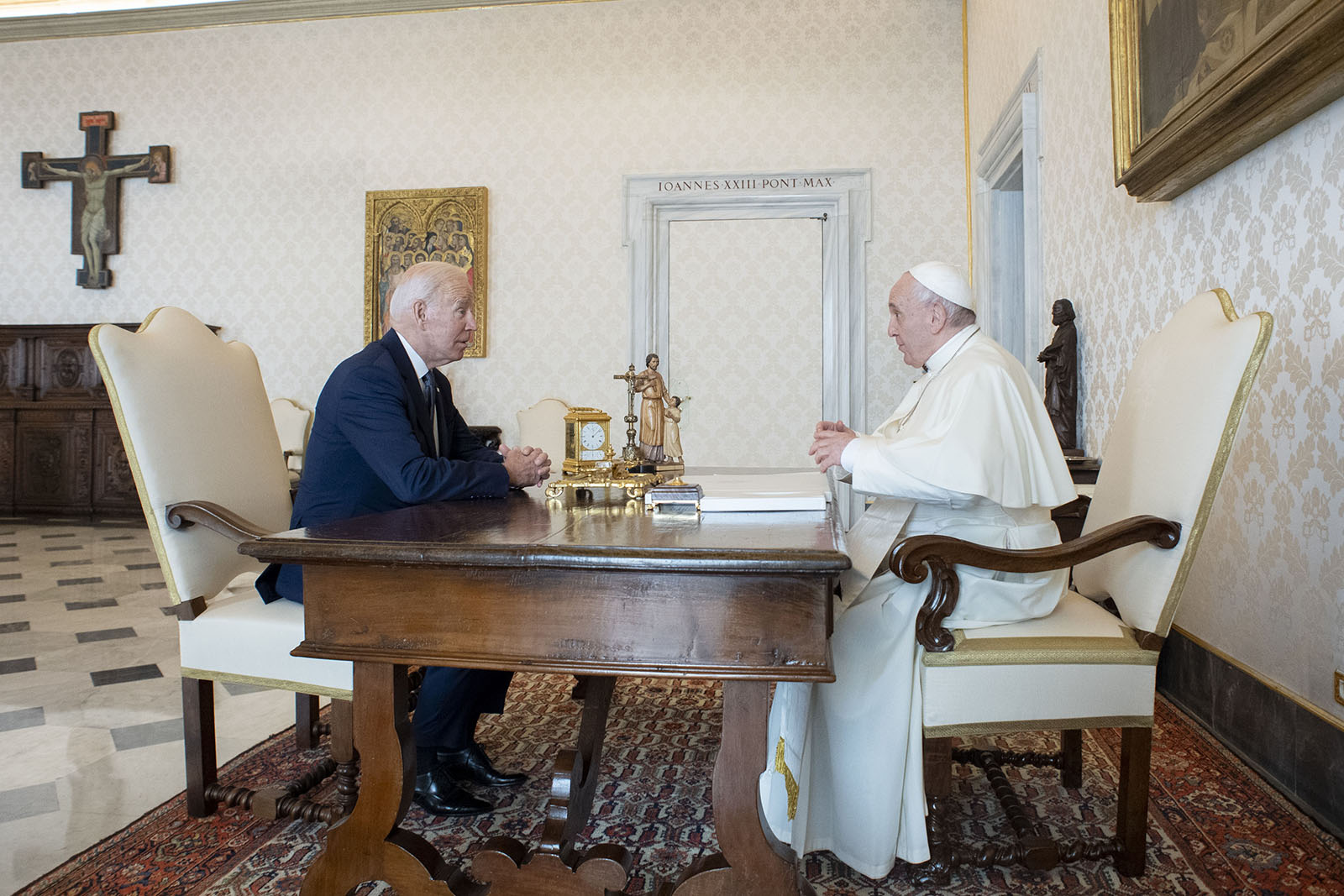 While presidential meetings with the pope tend to address global issues with broad strokes, discussions with the Vatican secretary of state usually delve into more details. Biden and Parolin addressed ways to promote vaccination against COVID-19 around the world and to “advocate for personal and religious freedoms world-wide,” the White House said.

Francis met with President Obama in 2015 for 50 minutes and with President Trump in 2017 for 30 minutes. The length of the conversation between Biden and the pope, coupled with the unusual degree of secrecy surrounding the event, led many Vatican observers to speculate that the two addressed the U.S. bishops debate over giving the president Communion despite his stance on abortion, which goes against Catholic teaching.

The American bishops have commissioned a draft document to clarify church teaching on abortion and clarify procedures for pro-choice Catholic politicians wishing to receive the sacrament.

On Thursday, Cardinal Raymond Burke, an American bishop now residing in Rome who advocated for denying Sen. John Kerry Communion as he ran for president in 2004, posted a statement on his blog titled, “Catholic Politicians and Non-Admittance to Holy Communion.”

“I must observe that I find, at best, naïve the common refrain that what is needed is more dialogue with the Catholic politicians and legislators in question,” Burke wrote, adding that pro-choice politicians are “unwilling” to discuss the question of abortion. Francis, while affirming the church’s opposition to abortion — he recently described abortion as “hiring a hit man” — has attempted to defuse the Communion debate. The president’s account of the pope’s reassurance constitutes the pontiff’s strongest statement on the matter. On his flight back from an apostolic visit to Hungary and Slovakia in mid-September, he said that he has “never denied the Eucharist to anyone” and that the sacrament should not be treated as “a prize for the perfect.”

The Vatican’s department charged with overseeing doctrine sent a letter to the American bishops in May urging them not to rush into making a decision and calling them to promote unity rather than discord.

Other Catholic prelates also turned to social media to express their thoughts on the issue.

“Who among you, if your son or ox falls into a cistern, would not immediately pull him out on the sabbath day?” (Lk 14:1–6). Jesus tells us that Love supersedes (and fulfills) the Law.

Cardinal Joseph Tobin of Newark and Cardinal Gianfranco Ravasi, who heads the Vatican’s Council for Culture, called for compassion by quoting a Gospel passage by Luke, which seemed directed at Biden. “Who among you, if your son or ox falls into a cistern, would not immediately pull him out on the sabbath day?” Tobin tweeted Friday.

RELATED: California bishops should ask, ‘What would Junipero Serra do?’

This story has been updated. The Associated Press contributed to this report.