LONDON, England (RNS) — She was one of the most wealthy financiers of her day, known to the kings of England and described as the most important Jewish woman of medieval England. She was also brutally murdered in what may have been a 13th-century hate crime.

Now, a statue of her is to be unveiled in the historic city of Winchester to both celebrate her achievements and alert people to the dark and often forgotten antisemitic past of Britain.

Licoricia of Winchester was a major financial backer of three English kings — John, Henry III and Edward I — and was well-known in Winchester, the city in Southern England where she lived and raised her family. Despite her status as a respected, prosperous businesswoman, it is suspected that her fatal stabbing in her home in 1277 may have been inspired by prejudice.

The lifesize bronze of Licoricia, which will be unveiled by the Prince of Wales in a ceremony next month, was designed by the sculptor Ian Rank-Broadley, who created the statue of Princess Diana unveiled in London last July. Licoricia’s statue will be blessed by Britain’s chief rabbi, Ephraim Mirvis.

Organizers of the fundraising effort for the statue, who are backed by the Anglican Winchester Cathedral, say that they want to highlight the existence of Jewish communities in medieval England and their achievements, to celebrate Licoricia as a role model and to recognize the impact and influence of antisemitism in England.

Maggie Carver, chair of the fundraising appeal, said: “A number of prejudices about Jewish people that still exist today, including claims about money and the blood libel, derive from England at that time. By throwing a spotlight on them through the erection of this statue we want to explain the history of these prejudices and help get rid of them.”

Jews first came to England with William the Conqueror in 1066, and though they were considered the monarch’s property and had some restrictions on their activities, they found work in teaching, medicine and trade despite some restrictions, until 1290, when there was a mass expulsion. Many of their Christian countrymen, who were barred from lending at the time, turned to Jewish financiers for loans.

When the kings of England embarked on the Crusades, they indirectly stoked resentment against Jews: Besides being perceived as infidels along with Muslims, the financiers were forced to call in the loans they’d made to pay taxes imposed by the kings specifically on the Jews to pay for the ventures in the East.

The resulting antisemitism came after years of relative peace. Many had settled near royal mints that were key economic centers — places such as York, Lincoln, Norwich and Oxford, as well as Winchester — and were protected by royal power. That protection did not always work. In 1190, 150 Jews in York were killed in a pogrom in the timber castle keep; most of them died by suicide in order not to fall into the hands of the mob.

It’s not clear from historical records when Licoricia — the name means sweetmeat — was born, but there is evidence to show that she was married and widowed twice. She was already a widow when she first appears in documents as a lender, and it is possible that her first husband may have worked in finance. Her second husband died in 1244, and she continued to work as a financier into her 70s until her death in 1277, when she and her Christian maid were stabbed to death at home.

Historian Rebecca Abrams, who has written a biography of Licoricia to mark the statue’s unveiling, said: “10-15 Jewish families held the bulk of Jewish wealth, and Licoricia’s was one of them. She was Jewish, she was rich, she was a woman: All three might have led to her death. It could have been score settling. She was litigious and pursued debts. She was very feisty and succeeded against the odds.”

Abrams says that Britain’s treatment of Jews needs to be remembered. “People like to think Britain hasn’t experienced the antisemitism of Europe, but we have a history of it, and we must address it. The expulsion in 1290 was the first such expulsion. Before that there was intolerant legislation that made life increasingly difficult. Jews were not allowed to touch food in the market; they had to point to it with a stick. The trope of the rich Jew living off the backs of the poor comes from 13th-century England.”

No drawings of Licoricia exist, so Rank-Broadley has based her depiction on his Jewish wife. It will be installed in Jewry Street, where Jews once lived in Winchester, opposite the site of Licoricia’s home and the synagogue of the time. In her right hand is a tallage, or tax demand, and her left hand is holding her son Asher, carrying a dreidel, or spinning top, used at Hanukkah.

The unveiling by the Prince of Wales will take place just two weeks after he opened an exhibition of seven portraits that he commissioned of Britain’s remaining Holocaust survivors and will become part of the royal collection. In the foreword to the catalogue for the exhibition, Charles wrote that we are “all responsible for one another, for our collective history.” 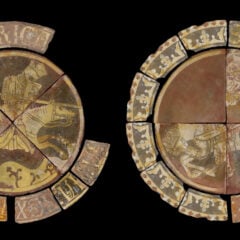