(RNS) — The Rev. Richard Smith, an Episcopal priest, has been working to improve the lot of workers in California long enough to have protested for farm workers alongside Cesar Chavez in the 1970s during the lettuce strike, when Smith was a Jesuit seminarian.

He’s still passionate enough about workers’ rights that last Holy Week he ritually washed the feet of janitors on strike at a picket line.

Now retired from St. John the Evangelist, a congregation in San Francisco’s north Mission district, he is one of a small number of clergy serving as intermediaries between labor unions and employers whose workers, particularly those in food service, are considering unionizing.

In a process known as the “card check” or “majority sign-up,” employers forego an anti-union campaign and instead choose to recognize a union endorsed by a majority of their employees. In the card check process — so called because workers sign a union authorization card — the employer and the union engage a trusted third party to accurately count and verify signatures on the cards.

This is where clergy like Smith have stepped in.

“I’ve been trying to figure out how to help the cause as best I can, especially during the pandemic. This sort of fit,” said Smith.

But the administrative work of card checks is nothing like protesting alongside workers. To learn his new role, Smith connected with the Catholic Labor Network, a nonprofit that promotes the cause of workers and Catholic social teaching in labor unions and parishes. Smith helped organize training sessions for priests interested in performing this duty. The first training began in September 2021, and CLN is planning another this spring or summer.

So far four priests have enabled about 1,000 low-wage food-service workers from Washington, D.C., to California to secure membership in Unite Here, a union with roughly 300,000 active members, according to Clayton Sinyai, executive director for the Catholic Labor Network. 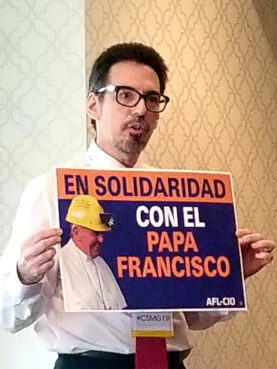 It’s a busy time for unions and organizers. As the economy recovers from the COVID-19 pandemic amid a nationwide labor shortage, American workers are believed to have the most bargaining power they’ve had in decades. They have used this leverage in a slew of labor actions. Kellogg employees in Michigan recently ended a nearly three-month-long strike at about the same time that staffers at a Buffalo, New York, Starbucks became the first to unionize one of the coffee chain’s stores.

But even as unions have seemed to surge, membership actually declined in 2021 to 10.3%, bringing the rate back to pre-pandemic levels.

Chuck Hendricks, director of national contracts with Unite Here who also serves as the financial secretary for the Catholic Labor Network, said that while it’s not common to find clergy involved in the card check process, some priests have a long history in the work, and the use of priests is still growing.

“I think it’s an outgrowth of people’s connections to religious communities, and some employers have decided that it is also a credible and fair way where they know that the people conducting those counts are trustworthy, honest brokers,” said Hendricks, who was raised Southern Baptist and later converted to Catholicism.

Clergy also tend to be trusted by the workers. “(They) felt more comfortable knowing that a clergy person was reviewing the signatures rather than an arbitrator or attorney or someone with the government,” Sinyai said.

The Catholic Church’s support of labor organizing goes back at least to Rerum Novarum, an encyclical issued by Pope Leo XIII in 1891 that addresses the condition of the working classes. In the mid-20th century, many parishes provided training for labor organizers (in part to prevent communists from dominating the unions). The pro-union Catholic priest played by Karl Malden in the classic movie “On the Waterfront,” about labor strife on the New York docks, was based on a real-life Manhattan priest.

“Catholic social teaching has a vision of a more collaborative relationship between workers and their unions and their employers,” Sinyai said. “The preferred relationship is a harmonious relationship, and this method of forming a union and bargaining collectively is much less conflictual.”

The clergy drawn to card check work tend to be longtime supporters of labor unions, having picketed with workers or as members themselves. But they stress that in this case they are filling an impartial role.

The job requires clergy to analyze and compare the workers’ signatures from a list of eligible employees provided by their bosses and the authorization cards signed in support of the union. Clergy have disqualified unidentifiable signatures that didn’t completely match up and have gone back to the union to let them know there weren’t enough verified signatures. 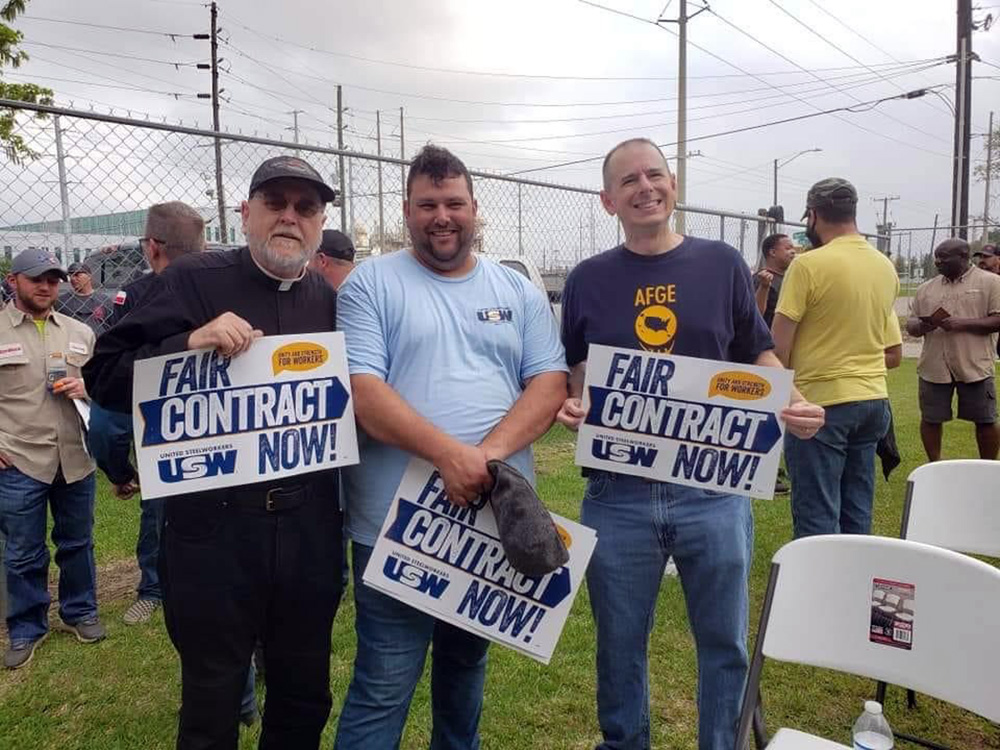 In Texas, the Rev. Sinclair Oubre was called to verify cards when workers at one of Google’s cafeterias sought to join Unite Here. Oubre, a member in the Seafarer’s International Union, said participating in this process was “heartening.”

“We can actually put to life our Catholic social teaching regarding work in a real, concrete way,” he said. “There’s this idea of cooperation, of dialogue, of collective bargaining to working toward the common good.”

In Washington, the Rev. Martin Burnham, of Catholic University of America, volunteered to certify the cards of workers who staff the Senate cafeteria at the U.S. Capitol.

Even in such august surroundings, Burnham said he was most awed by the implications of the task at hand. “It was certainly very humbling to know that people’s lives and futures were put into that decision-making process, that I was the one doing this check and matching up signatures,” Burnham said.

“It was a great responsibility.”

Signs of the Times
Let’s celebrate the Epiphany with an eye on the future
Follow us on Facebook!
Submit your photos to RNS