(RNS) — The Rev. James Martin, a Catholic Jesuit priest, thinks it’s unchristian to enjoy the suffering of others, even when they seem to deserve it. In a New York Times op-ed a few days ago, Martin criticized schadenfreude, the German term for such enjoyment (literally, “harm-joy”), particularly when it comes to taking pleasure, and even rejoicing, when prominent anti-vaxxers succumb to COVID-19.

Jesus asked us to pray for our enemies, not celebrate their misfortunes. He wanted us to care for the sick, not laugh at them. When Jesus was crucified alongside two thieves, he says to one of them, according to Luke’s Gospel, not “That’s what you get,” but “Today you will be with me in paradise.” Schadenfreude is not a Christian value. It’s not even a loosely moral value.

With due respect to a cleric I admire immensely, I’m not so sure that schadenfreude is quite as excluded from Christian values as he claims. Consider, for example, this line from that most beloved of biblical poems, Psalm 23: “Thou preparest a table before me in the presence of mine enemies.”

I’d say the line introduces an element of psychological realism that keeps the psalm from being merely a testimony of pious obedience. Who among us would deny that it sanctions a bit of gloating on the part of God’s flock?

To be sure, the psalms are not Christian texts, per se. But Christians, having inherited them from us Jews, embraced them wholeheartedly. Think of all those medieval psalters.

Martin himself does not lack for enemies, thanks to his campaign to get his church to be more welcoming of the LGBT community. (Yo, Father Z!) I expect it’s a solid spiritual exercise to resist enjoying their gnashing of teeth as a table piles up before him with his best-selling books, regular mainstream media appearances and praise from the pope.

As for Jesus, in the Sermon on the Mount, that great brief for personal perfection, he tells his followers not just to pray for their enemies but to love and bless them. However, he also says in all three of the synoptic gospels that if anyone should cause one of the little ones who follow him to stumble, he should have a millstone hung around his neck and be thrown into the sea.

RELATED: It’s the most ‘angry’ time of the year?

If such a thing came to pass — if someone who led a young follower astray lost his life — would Jesus have been tempted to rejoice? Maybe not, but neither am I prepared to exonerate him entirely from leading us into such a temptation.

Check out the Gospel of Matthew’s chapter 23 and you’ll find Jesus again and again saying, “Woe unto you, scribes and Pharisees, hypocrites!” In the tradition of the prophet Isaiah, he despised religious hypocrisy, the doing of evil behind the screen of piety.

And so, Western culture has learned to love it when hypocrites are exposed for who they are, and truth to tell, it’s not the most admirable of reactions. The exposure comforts us with evidence that those great persons who shame us by their evident virtue turn out to be just as bad as we are, maybe even worse.

Nevertheless, our rejoicing does serve to reinforce the norms of good and evil, underscoring La Rochefoucault’s quip that hypocrisy is “an homage of vice to virtue.” In other words, schadenfreude, in moderation, has its value. 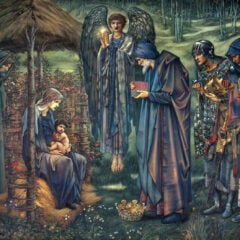 Opinion
God’s power or human violence: The meaning of the virgin birth
Follow us on Facebook!
Submit your photos to RNS