(RNS) — The United Arab Emirates has received much attention of late for normalizing relations with Israel. The establishment of embassies and warm visits by the countries’ heads of state have helped Jewish life blossom in the UAE like never before.

Last year, construction began in Abu Dhabi on the first official synagogue in the Emirates, part of a larger state-funded project to build a mosque, church and temple in the same complex to represent the three Abrahamic faiths.

Less heralded but equally significant has been UAE’s role in restoring Christian life in the Persian Gulf, where it was facing possible extinction in the land of its birth due to years of terrorism and repression.

Within the UAE itself, Christianity is alive and well. In addition to the church rising from the sands in Abu Dhabi at the Abrahamic Family House complex, the UAE boasts churches for foreign Christians of every denomination. Weekly Sunday services bring together worshippers from Europe, North America, Africa, Asia and the Middle East. Nothing of the like exists in its neighbor Saudi Arabia or nearby Iran. An Egyptian Coptic Christian once remarked to me how he felt safer practicing his faith in the Emirates than in Cairo.

Noura Al Kaabi, the UAE’s minister of culture and youth, recently talked to me about her country’s efforts, emphasizing how, “since its founding, the UAE has promoted the values of tolerance, coexistence, peace and harmony both at home and internationally.”

As evidence, she cited the UAE’s declaring 2019 the Year of Tolerance, during which the country hosted the historic meeting between Pope Francis and the grand imam of Al-Azhar to launch the Document on Human Fraternity, an effort to foster interfaith understanding and interreligious tolerance. 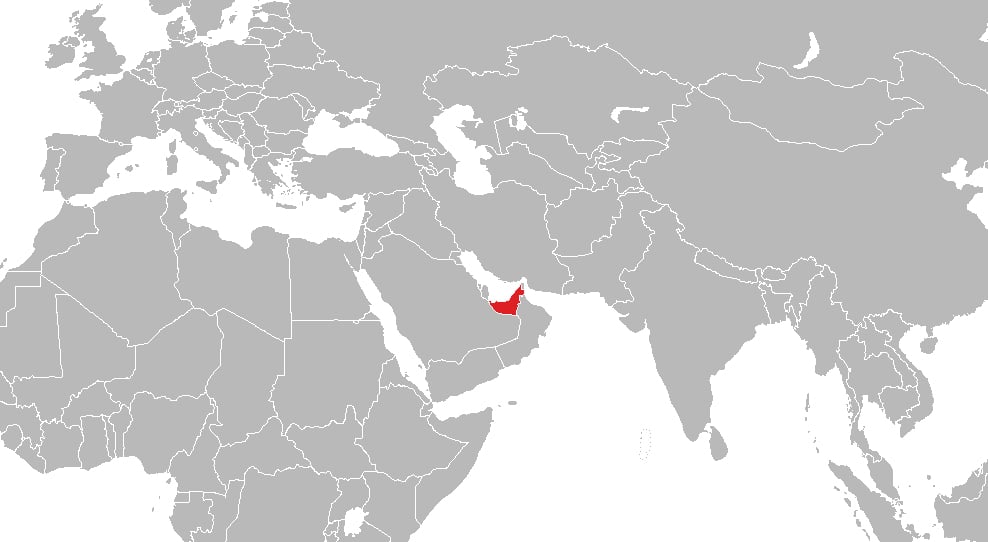 The United Arab Emirates, red, located along the southern edge of the Persian Gulf. Map courtesy of Creative Commons

The UAE’s promotion of tolerance presents a clear alternative to the violent ideology and nihilism of the Islamic State group, also known as ISIS. Helping restore Christian life in Iraq is part of that work.

In 2014, the world witnessed ISIS’ deliberate campaign of mass atrocities aimed at erasing Iraq’s physical and historic religious landscape. Besides the mass killings and sexual enslavement that grabbed headlines, ISIS destroyed religious and cultural sites belonging to religious minorities and Muslim communities. Since ISIS’ defeat, the loss of historic cultural and religious sites remains a challenge to any successful rebuilding effort.

To counter ISIS and promote tolerance, Al Kaabi explained, the UAE funded the restoration of two historic churches in Mosul in 2019, along with the iconic Al-Nouri Mosque. UAE’s support allowed UNESCO to restore the historic Al Tahera and Al Sa’aa churches, both devastated by ISIS.

“The Al-Nouri Mosque, the Al Tahera Church and the Al Sa’aa Church are important historical icons that stood for centuries as living symbols of Mosul’s rich and diverse civilizational identity,” said Al Kaabi. ”Therefore, it is important to work towards restoring these cultural sites as a symbol of strength in social harmony and diversity.”

Occupied by ISIS from 2014 to 2017, Mosul, Iraq’s second-largest city and a crossroads of civilizations for millennia, is home to people from diverse backgrounds, ethnicities and religious beliefs. Christians, Muslims and other members of Iraq’s diverse religious tapestry lived together for centuries.

Once the city was liberated, the UAE partnered with UNESCO to launch the “Revive the Spirit of Mosul” project to foster reconciliation and restore interfaith harmony and social cohesion. Preserving worship sites is central to that effort.

“The restoration and rehabilitation means the revival of a culture that thrived for centuries due to its openness, tolerance and moderation,” said Al Kaabi. “When the sites are fully reconstructed, they will serve as places for prayer, worship, reflection, learning and exchange.” Pope Francis, surrounded by shells of destroyed churches, leads a prayer for the victims of war at Hosh al-Bieaa Church Square, in Mosul, Iraq, once the de-facto capital of ISIS, Sunday, March 7, 2021. (AP Photo/Andrew Medichini)

Progress was already evident in March 2021 during Francis’ visit to Iraq, where he held a Mass in front of the remains of Al-Tahera Church and prayed for the victims of war. Audrey Azoulay, the director-general of UNESCO, called the pope’s visit to the church “a message of hope, healing and trust in our shared humanity.”

Al Kaabi is also proud of how the UAE-funded UNESCO project brings people of different backgrounds together. “Most notably, the Moslawi young professionals and craftspeople who are working side by side with their Muslim and Christian peers on the three project sites will be able to speak firsthand of the power of fraternity and tolerance.”

The UAE is breathing new life into Mosul’s Christian community, as well as promoting interfaith relations through heritage protection. While the normalization of relations with Israel has grabbed headlines, the UAE has quietly provided space for a revival of Christian life on the Arabian Peninsula and in Iraq. Al Kaabi is clear on what kind of statement the UAE hopes to send with this restoration effort.

“We want to send out a clear message that the mayhem spread by extremist ideologies can be undone, and divisive forces can be countered.” How? “Through nurturing and channeling stronger forces of coexistence and harmony, and culture has a prominent role to play in this.”

(Knox Thames is the former special envoy for religious minorities at the U.S. Department of State, serving during the Obama and Trump administrations. He is writing a book on ending 21st-century persecution. Follow him on Twitter @KnoxThames. The views expressed in this commentary do not necessarily reflect those of Religion News Service.)