CAIRO (AP/RNS) — The young woman could hear her heart pounding so hard that she worried the microphone placed in front of her would pick up its sound. Seated around her were officials from Islamic nations, including her country’s president. Cameras clicked.

She closed her eyes.

Al-Zahraa Layek Helmee’s voice filled the spacious, columned hall with a melodic recitation of the Quran, a role customarily held by men in her country, Egypt. For the 18-year-old, the high-profile recitation of Muslim holy text at a Cairo conference of the Organisation of Islamic Cooperation was a personal milestone — one that she also hopes would send a message to women and girls: That can be you.

“I wanted to prove that women have a great role to play when it comes to Quran recitation,” she said.

Across cultures and Muslim communities, the boundaries of such a role can be subject to debate. Attitudes vary toward women publicly reciting the Quran within earshot of nonrelated men — in person, online or in other media. While the most skilled female reciters may attain celebrity-like status in some countries, others are largely confined to private spaces or all-women audiences.

Campaigns have been springing up online to amplify the voices, and widen the reach, of female Quran reciters across the world, with many posting their recitations and encouraging others to follow suit. It’s part of a larger effort by some Muslim women who say they want to build on the historical examples of other women in their faith to expand their spiritual leadership roles in Islamic spaces. 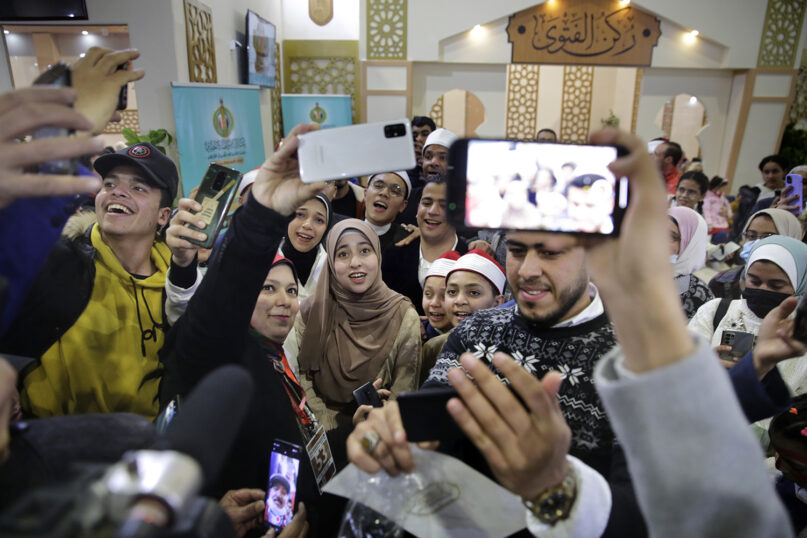 Al-Zahraa Layek Helmee, center, is surrounded by her fans for selfie pictures at the annual Cairo International Book Fair, in Cairo, Egypt, Feb. 4, 2022. Online, where Helmee has 1.2 million followers on Facebook, many cheer her on. Others — men and women — reprimand her in messages, urging her to “fear God” or arguing that her voice can tempt men, an idea she rejects. (AP Photo/Amr Nabil)

Online, where Helmee has 1.2 million followers on Facebook, many cheer her on. Others — men and women — reprimand her in messages, urging her to “fear God” or arguing that her voice can tempt men, an idea she rejects.

The controversy “is a matter of convention more than law,” said Zahra Ayubi, a Dartmouth College associate professor who studies gender and Islamic ethics.

The concern over women’s public recitation, she said, emerges from the interpretation by some that a woman’s voice is part of her “awrah” — nakedness or vulnerability — and should therefore be guarded from nonrelated men to prevent temptation. But many scholars and religious bodies have contested the argument that a woman’s voice in itself can be “awrah,” saying it’s what she says and her manner of speech that matters.

“When women are reciting the Quran, it’s an incredibly powerful response to the idea that their voices are awrah,” Ayubi said. “Because they are speaking the most honorable truth for Muslims, and in doing so keeping true to God’s command to speak honorably.”

Learning to read and understand the Quran is considered crucial for men and women alike. But perfecting recitations, or reciting professionally, usually takes rigorous studying and practice to master elaborate rules governing such things as proper pronunciation and articulation.

For many Muslims, the voice of Quran reciters permeates daily life, blaring from car radios and smartphones or playing out on television channels. Reciters are often invited to religious or social events, sometimes moving their listeners to tears. Many devout Muslims play recordings of favorite reciters at homes or businesses to contemplate the verses or soothe their souls. 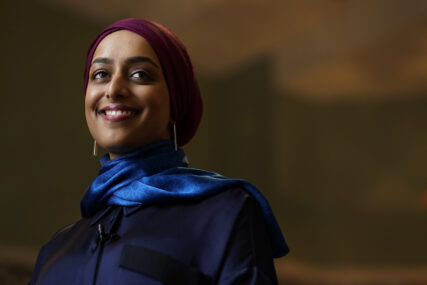 Madinah Javed smiles during an interview on her role in encouraging female reciters of the Quran, in a prayer room at the American Islamic College Thursday, Jan. 27, 2022, in Chicago. Javed, who grew up in Scotland and now lives in Chicago, has turned to social media to highlight existing #FemaleReciters like herself while inspiring more to share recitations. (AP Photo/Charles Rex Arbogast)

Seemi Ghazi, who teaches Quranic Arabic at the University of British Columbia, recalls how —growing up — she would wake up to the sound of her mother reciting the Quran.

“For so many Muslims, we actually experience the Quran primarily and initially through the breath, the tone, the embodiment, the voice of women, most often our mothers,” she said. “So it’s not as though hearing a woman’s voice is something so new. It’s the question of the public sphere which may be distinctive.”

Ghazi, who recites Quran as part of Sufi circles she leads in Vancouver and at interfaith events, sees a blossoming of Muslim women’s voices in alternative Islamic spaces, particularly on social media.

There was a time when Maryam Amir didn’t even know women could be Quran reciters; today she is part of that blossoming. The California-based Amir recalls recoiling the first time she heard a girl reciting at an event where men could hear her. She complained to the organizer.

“She was from Indonesia, and she told me, ‘In Indonesia, women recite the Quran on television, in conferences, in competitions.’”

One of those women, Maria Ulfah, has made a name for herself that transcends Indonesia’s borders. She’s won and judged competitions at home and abroad and has been invited to recite in many parts of the world. Her recordings have carried her voice to the faithful outside of Indonesia. At home, where she says female reciters enjoy the same status as men, some fans have named their children after her.

“In Indonesia, people are very appreciative and proud,” Ulfah said.

Differences in attitudes, she argued, are largely cultural. 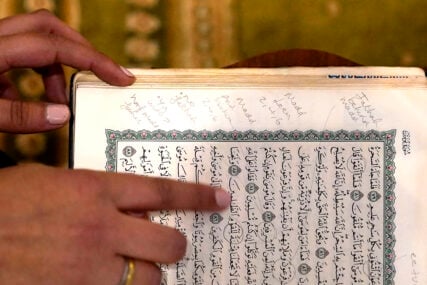 Madinah Javed points out marginal notes she wrote in her childhood Quran while learning to be a reciter, in a prayer room at the American Islamic College Thursday, Jan. 27, 2022, in Chicago. (AP Photo/Charles Rex Arbogast)

In California, Amir’s views on the topic have evolved through her research and interactions with Muslims abroad. She has memorized the Quran, becoming a “hafiza,” a role that is highly prized and encouraged in Muslim communities. She’s also studied Islamic sciences, launched a social media campaign to get women to post recitations of themselves and is now working on a new app. It features recitations by Muslim women around the world, created in collaboration with a council of Islamic scholars.

Amir says she’s seen signs of a shift in attitudes.

“Since people started hearing that scholars have different opinions on this issue … people are starting to think about this differently,” she said. “There are many women who memorize the Quran, but they had no idea they could recite in these spaces.”

Madinah Javed, who grew up in Scotland and now lives in Chicago, has also turned to social media to highlight female reciters like herself while campaigning to inspire more to share recitations. She is amazed by the resulting connections among women from different cultures and with different styles of recitations.

Online, Javed has encountered strong support from some, while she found others to be more focused on appearance, like whether her neck was showing, than the recitation.

As great as social media has been to raise awareness, she said, real change takes face-to-face interactions. “It’s going to take a much longer time for change to happen” in some communities. 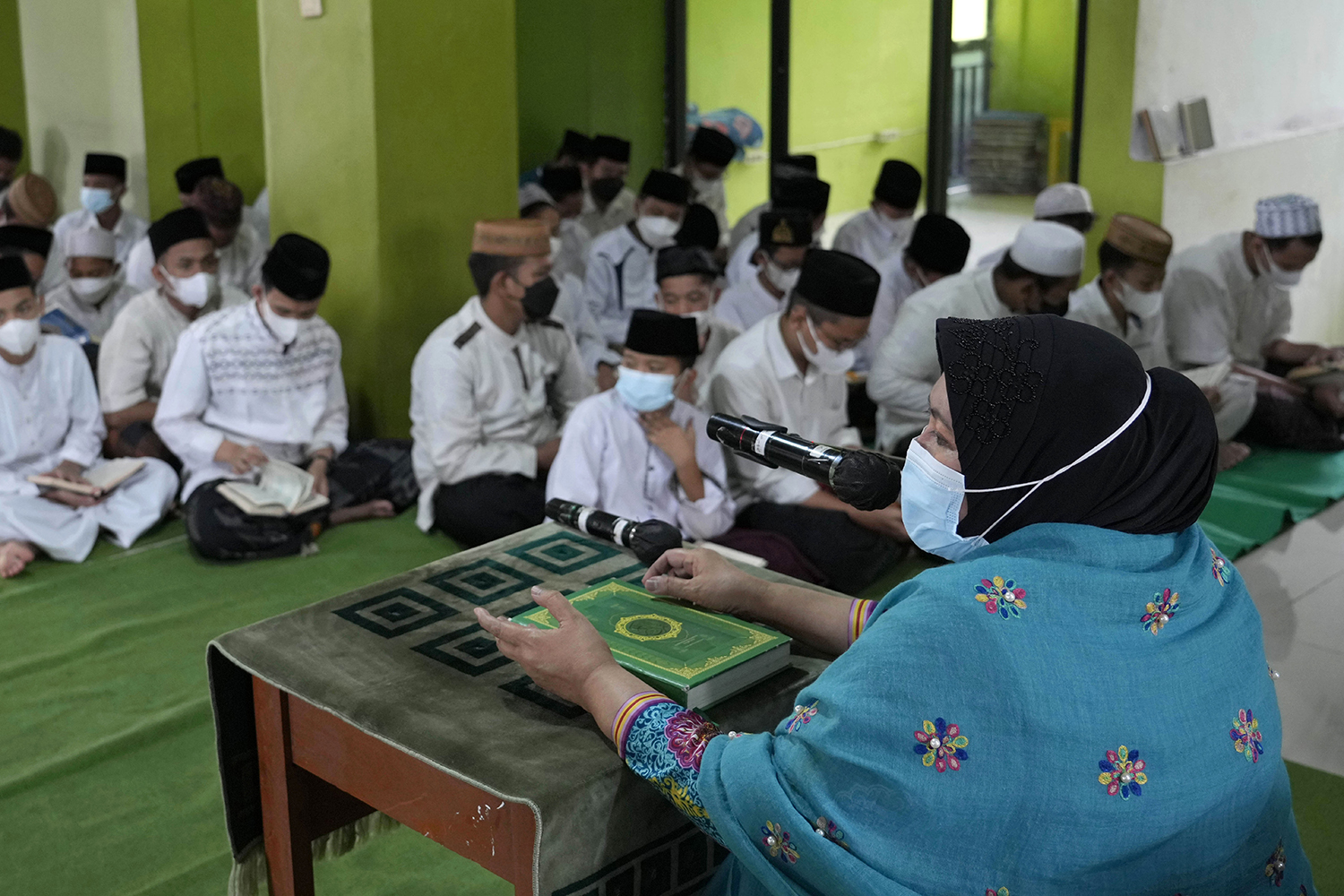 Maria Ulfah, right, sits in front of a class where she teaches Quran recitation at Baitul Qurro Islamic Boarding School in Jakarta, Indonesia, Friday, Feb. 4, 2022. While the most skilled female reciters may attain celebrity-like status in some countries, others are largely confined to private spaces or all-women audiences. (AP Photo/Tatan Syuflana)

In Egypt, the makeup of the country’s syndicate for reciters and those who teach Quran memorization provides one indication of the road ahead for those advocating female representation. Of 10,000 members, there are just about 100 women and they are focused on teaching memorization, according to the syndicate’s head, Mohamed Hashad.

Helmee, who started learning the Quran with a tutor shortly after she turned 3 and memorized it at 10, hopes that will change.