(RNS) — George W. Bush may have been the closest thing the Christian right had to a president who was one of them, but his eight years in office did little to further their political religion. The faith-based initiative that marked his first months in office was about the common good, not the culture war.

RELATED: From the new Christian right to Christian nationalism, part 1

Immediately after the attacks of 9/11, Bush visited Washington’s Islamic Center to deny that terrorism was “the faith of Islam,” thereby signaling the U.S. response would not be a religious crusade. His wars in Afghanistan and Iraq harked back to Woodrow Wilson’s make-the-world-safe-for-democracy idealism, not Lindbergh’s America First isolationism.

But the gradualist political strategy pioneered by the Christian Coalition’s Ralph Reed proceeded apace. In the early 2000s, white evangelicals became solidly locked into the Republican Party, and they have voted for GOP presidential and congressional candidates by 4-1 margins ever since. In 2002, Reed gave an object lesson in faith-based mobilization as chairman of the Georgia Republican Party when he flipped the state from Democratic to Republican control.

After Bush left office and Barack Obama assumed the presidency, the wheels of Buchanan-style political religion began to turn freely again. Hostility to Islam became a wedge issue through the birtherism that made Obama out to be a Muslim born in Kenya, the Fox News-driven “ground zero mosque” controversy and state referendums against the establishment of “Shariah law.” The 2010 midterms featured the tea party — or, to be precise, sundry organizations that bore its name. Created to protest taxes and the Affordable Care Act, the organizations drew heavily on white evangelicals, who were five times more likely to support than oppose it. Decked out in Revolutionary War garb, the partiers presented themselves as God-and-country patriots.

The tea party turned out to be a warmup for Donald Trump, who made white evangelicals his most fervent supporters as he constructed an America First ideology based on Islamophobia, closed borders, beggar-thy-neighbor tariffs and religious liberty for his religious supporters. What fireside chats were for Franklin Delano Roosevelt’s presidency, political rallies were for Trump’s. The Jan. 6 assault on the Capitol was their apotheosis. 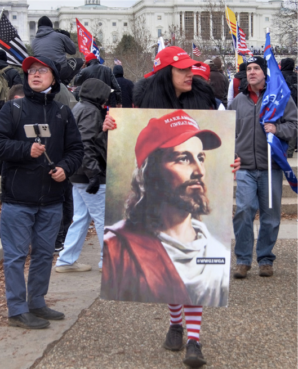 The role of religion in the assault on the Capitol was detailed last week in a report from the Baptist Joint Committee and the Freedom From Religion Foundation titled “Christian Nationalism and the January 6, 2021 Insurrection.” In the introduction, the BJC’s Amanda Tyler defines Christian nationalism as “a political ideology and cultural framework that seeks to merge American and Christian identities, distorting both the Christian faith and America’s constitutional democracy.”

It would be more accurate to call this merging of identities Christian Americanism — the political religion of the Trumpist GOP.

No single piece of iconography better conveys this religion than “One Nation Under God,” the painting by Jon McNaughton reproduced at the top of this column. Based on medieval portrayals of the Last Judgment, it shows Jesus holding the U.S. Constitution, flanked by the country’s saints, with the saved (pious citizens) at the lower left and the damned (journalists, professors, feminists) at the lower right.

McNaughton is not an evangelical but a member of The Church of Jesus Christ of Latter-day Saints. That Christian Americanism considers the Constitution God-given is thanks to Mormon doctrine going back to Joseph Smith that it is so.