(RNS) — A newly released report on the internal culture at Ravi Zacharias International Ministries found that leaders at the ministry were blinded by loyalty to the founder, overlooked Zacharias’ misconduct for years, used ministry funds to sue an abuse survivor and misled the public.

The report from Guidepost Solutions was released Wednesday (Feb. 23), seven months after the board of RZIM, which remains anonymous, received it. According to the report, board members had full control over the public release of the document — which was posted to the ministry’s website less than an hour before the evangelical magazine Christianity Today published a story detailing the report’s contents.

In an unsigned letter, the board of RZIM placed the blame for the organization’s failings squarely on the shoulders of Zacharias, who died in 2020. Once a beloved preacher, author and Christian apologist, the now-disgraced Zacharias also had a long pattern of sexual misconduct and abuse, according to a report released in 2021 by RZIM.

“We at RZIM sincerely apologize for the enormous pain caused by Ravi Zacharias’ sin and our failure to uncover it sooner,” the board said in the statement announcing the release of the Guidepost report. “Regretfully, we trusted and defended a man of whose integrity we were firmly convinced.”

The board also admitted that it had used ministry funds to pay for Zacharias’ legal bills, despite a 2017 public statement to the contrary, and that it had failed to correct that statement.

Still, the board raised doubts about the accuracy of the report. The anonymous board also claimed it was being transparent by releasing the report. 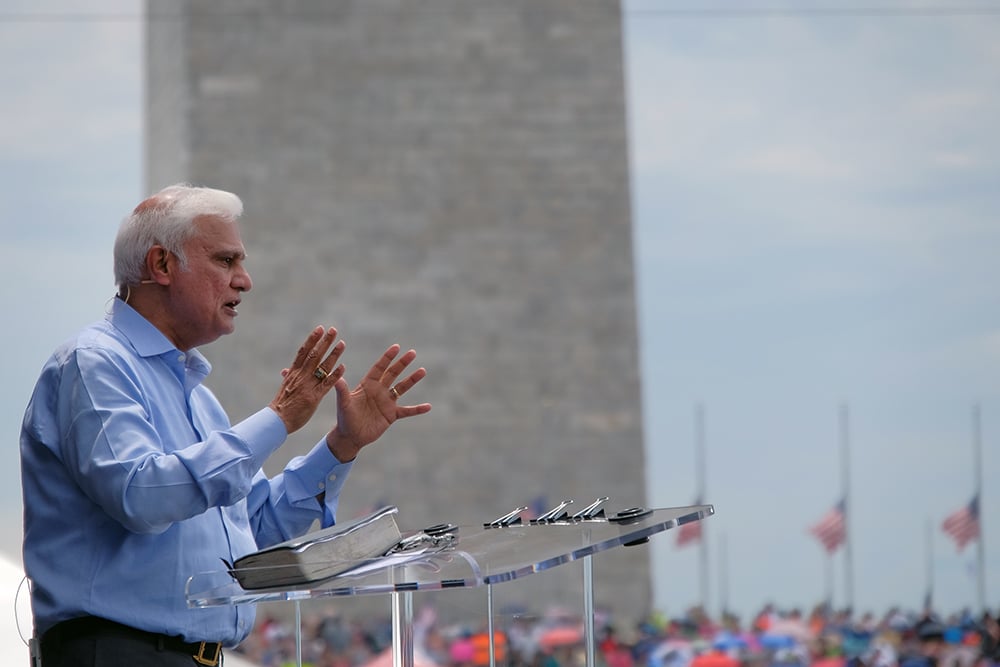 Ravi Zacharias addresses a crowd gathered on the National Mall for Together 2016 in Washington. Photo courtesy of RZIM

“Although we are releasing this report, we do not agree with everything in it,” the board letter stated. “We believe there are inaccurate accounts or pieces of information that were either overlooked or omitted by Guidepost and we disagree with some characterizations therein.”

In the report, Guidepost Solutions said the RZIM board had withheld information from the team working on the report and refused to allow Guidepost to name board members it spoke to during its five-month investigation. Overall, leaders were cooperative, the report states, but there were issues in getting information.

“However, we are not confident that RZIM has provided us with all information relevant to our investigation,” according to the Guidepost report. “In other words, we fear that if we did not specifically request an exact piece of information — for example, if we were not aware of its existence, but its relevance to our work would be apparent — RZIM would not have provided it proactively, even if RZIM knew that it would provide clarity.”

Guidepost found that leaders at RZIM had been aware of allegations of inappropriate behavior by Zacharias since at least 2008 — when the apologist was reportedly seen in Singapore holding hands with a young woman. In 2011, an RZIM board member traveled to Singapore at Zacharias’ request to discuss a visit the apologist had made to a massage studio.

For years Zacharias traveled with a female masseuse — which raised eyebrows among some staff. But anyone who questioned Zacharias was “sent to Siberia” — a term for being sidelined or marginalized by RZIM leaders.

In this May 29, 2020, file photo, images of Ravi Zacharias are displayed in the Passion City Church during a memorial service for him in Atlanta. A posthumous sex scandal involving Zacharias, who founded the Ravi Zacharias International Ministries, placed the global organization in a wrenching predicament. (AP Photo/Brynn Anderson, File)

A number of massage workers came forward after Zacharias’ death to accuse him of sexual misconduct at spas that he had co-owned in the United States. A 2021 report also found Zacharias spent extensive time overseas on writing trips, where he often got massages. Zacharias also allegedly groomed Lori Thompson, a Canadian supporter, asking her to send nude photos and then urging her to keep their correspondence secret.

Zacharias later sued Thompson and her husband — then paid Thompson a $250,000 settlement that required her to sign a nondisclosure agreement that is still in force.

Ruth Malhotra, former longtime RZIM spokesperson, said the Guidepost report, while important, was disappointing. She said RZIM failed to live up to its promises to be transparent and that Guidepost had not included the stories of survivors of abuse in the report, which was limited to the RZIM culture and leadership.

“The Guidepost report on RZIM reveals a staggering pattern of financial corruption and false communications from the Board and senior leadership that concealed and enabled Ravi Zacharias’ abuse,” she said. “Yet this report only exposes the tip of the iceberg in what was a toxic organizational culture that harmed many people within and beyond the ministry.”

She said there were “troubling omissions” from the report.

Overall, Guidepost found RZIM leaders failed to hold Zacharias accountable and believed his side of the story when allegations were raised — even if his explanations were suspect. The report also found that no RZIM leaders had firsthand knowledge of Zacharias’ misconduct.

“As set forth in detail in this report, we found that in assessing and responding to allegations against Zacharias made by Thompson and others, RZIM heavily and unjustifiably relied upon Zacharias’ representations, many of which were discernibly dubious at the time and are even more doubtful today, in light of revelations that have emerged since 2020,” the report states. 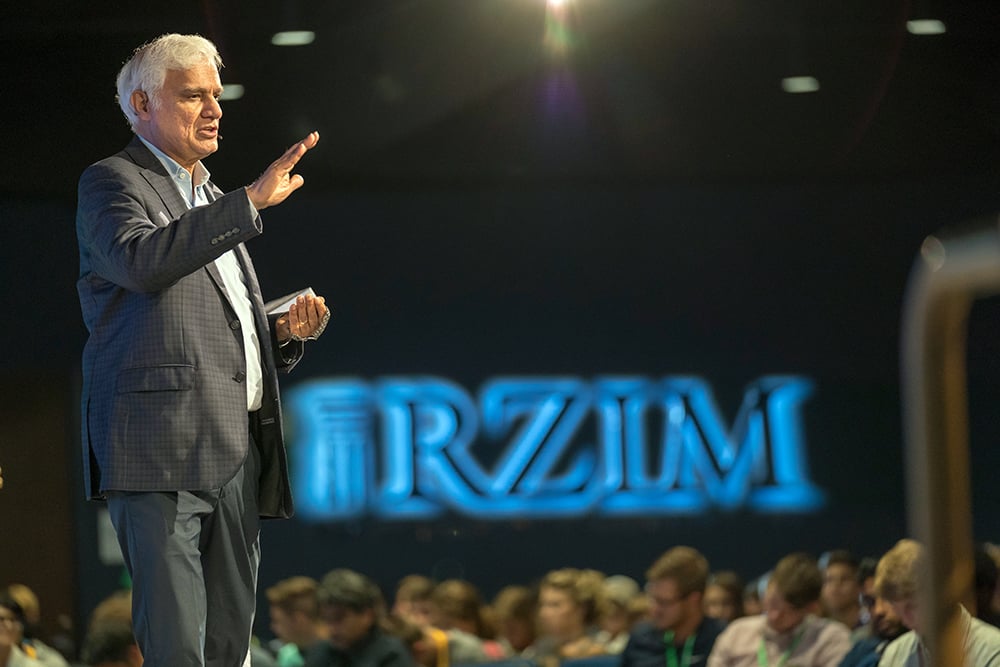 “RZIM leaders — some of whom were related to Zacharias — accepted his explanations, failed to drill down on contradictions and to pursue additional inquiry, and minimized the interest of individuals at RZIM who sought more information or expressed doubt about Zacharias’ rationalizations.”

RELATED: She wanted to help Ravi Zacharias save the world but ended up defending an abuser

Guidepost also found that the executive committee of RZIM’s board agreed to pay for Zacharias’ legal bills but did not tell the entire board or RZIM top leaders that it had done so. Some of the legal payments and other financial transactions were also hidden in a “confidential file” apart from the ministry’s normal accounting and financial oversight process, a pattern that “represents a loophole in RZIM’s internal controls that could be exploited to the detriment of the ministry.”

The RZIM executive committee also authorized a $250,000 loan to Zacharias that was used for the Thompson settlement, then gave the apologist a $400,000 bonus, enough to repay the loan and pay taxes associated with the bonus.

Guidepost concludes its assessment with a series of recommendations, including changes to its leaders, as many of the leaders who mishandled the allegations against Zacharias were still in place when the report was completed. Since the report was delivered to the RZIM board, Sarah Davis, the ministry’s former CEO and Zacharias’ daughter, stepped down and started a new ministry. One of the first projects of the new ministry, Lighten (initially named Encounter), is a video about “cancel culture.”

Davis has left the new ministry, said Kristen Henriques, co-CEO of Lighten. The Lighten team includes a number of former RZIM staff and  is a tenant in RZIM’s building, while it looks for new space.

“We also received a line of credit from RZIM to launch the ministry, but our desire is to repay all of the loaned funds as soon as possible since we want to leave as many resources available for other apologetics organizations,” Henriques told Religion News Service in an email. 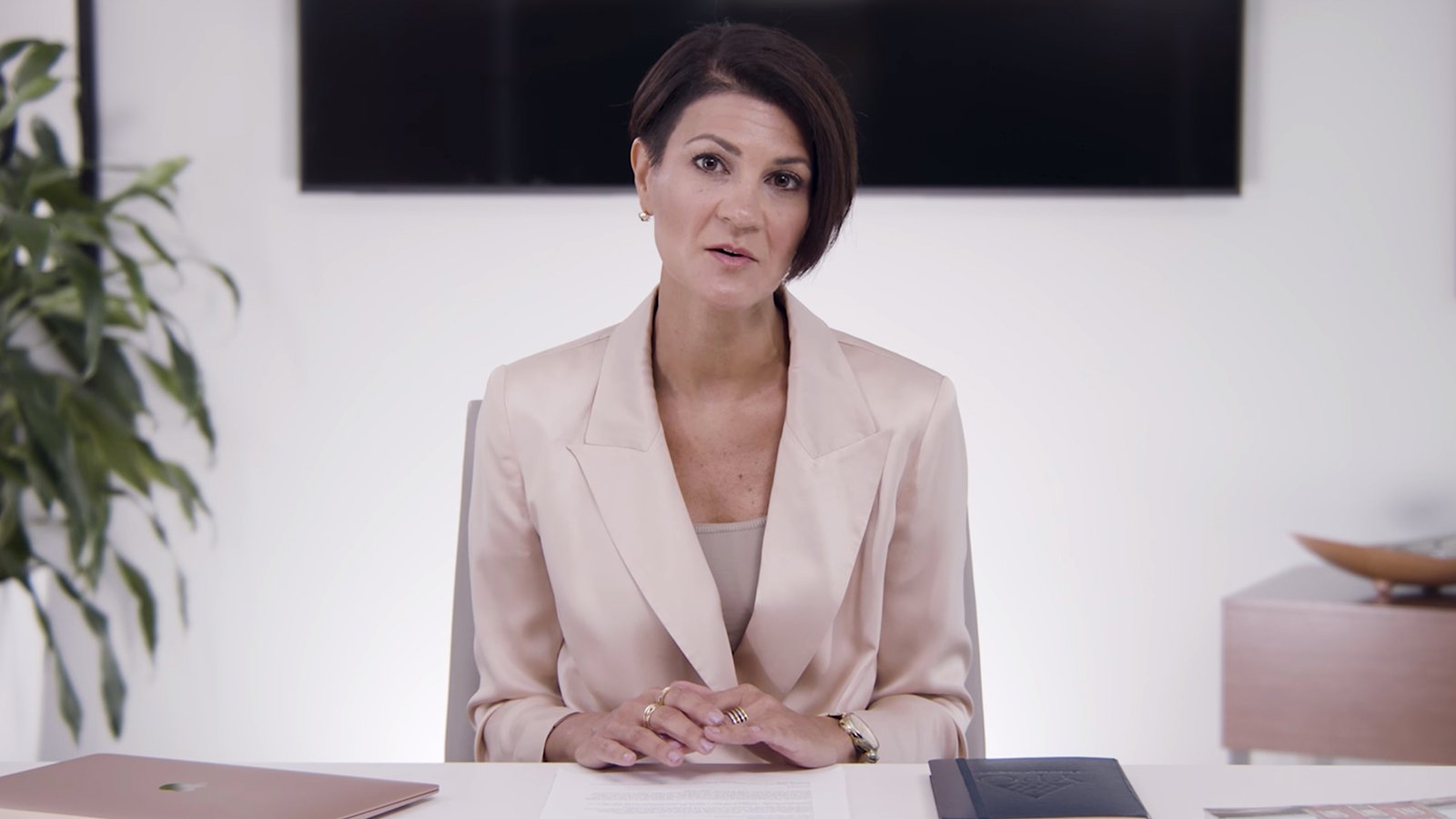 Sarah Davis, former CEO of RZIM and eldest daughter of Ravi Zacharias, speaks in a May 2021 video about her father’s misconduct. Video screen grab via Facebook/RZIM

Other recommendations included tightening financial controls, making the names of board members public, adding independent board members who do not have close ties to the Zacharias family and strengthening the organization’s personnel policies.

Guidepost’s assessment is skeptical about the ability of RZIM to make changes needed to restore the ministry’s credibility — citing issues with current leaders as well as distrust among many current staffers.

“It will be difficult for the current RZIM leaders and the board to rebuild trust with the ministry’s employees and members and to reestablish their credibility as leaders, because of their previous failings. In our view, this is the most significant obstacle that RZIM’s leaders and directors must overcome if RZIM is to survive, as an apologetics ministry, a grant-making organization or in some other form.”

RZIM did not respond to an email requesting comment.

In the past, RZIM’s board has said the ministry will stop doing apologetics and instead make grants to other Christian groups, but no details of that work have been made public.

RZIM also faces significant legal challenges. A group of donors has sued the ministry, claiming that RZIM misled them into thinking Zacharias was a trusted Christian leader.

This story has been updated with details about Sarah Davis’s departure from Lighten.Thgs