(RNS) —  The CEO of Ravi Zacharias International Ministries is leaving the beleaguered organization, nine months after an independent investigation detailed the abuse and misconduct of the ministry’s late founder.

The evangelical magazine Christianity Today reported this week that Sarah Davis, daughter of the late Zacharias, has resigned from RZIM to start a new Christian ministry tentatively named “Encounter.”

Neither Davis nor Michael Ramsden, the president of RZIM, would confirm her departure, nor any details about Encounter, which, according to Christianity Today, will likely be housed at RZIM’s headquarters near Atlanta and will be led by Davis and other longtime RZIM staff.

“Encounter is a ‘holding’ name for a new Christian evangelism and apologetics ministry we have formed with a talented team of speakers, writers, media specialists, and professional staff,” Davis told Religion News Service in an emailed statement. “We exist to give people an imaginative experience of Jesus Christ and to help answer deeply held questions, sharing the gospel through spoken, written, and digital word. We seek to thoughtfully engage people in gospel conversations and to train and disciple Christians to be messengers of Christ’s love in their spheres of influence.”

Davis did not answer questions about the funding for the new organization. She did say in her statement that more details about the ministry would be made public in the future.

Critics of RZIM worry Davis is leading what is essentially a stealth reboot of the ministry.

RELATED: She wanted to help save the world. Instead, she ended up empowering an abuser

At the time of his death in May 2020, Zacharias was a legendary Christian apologist, beloved by evangelical leaders and people in the pews alike. Former college football star turned evangelical celebrity Tim Tebow spoke at his funeral, as did then-Vice President Mike Pence and megachurch pastor Louis Giglio.

In this May 29, 2020, file photo, images of Ravi Zacharias are displayed in the Passion City Church during a memorial service for him in Atlanta. (AP Photo/Brynn Anderson, File)

“In Ravi Zacharias, God gave us the greatest Christian apologist of this century. He was the C.S. Lewis of our day,” Pence said during the funeral.

In his later years, Zacharias’ reputation had survived largely intact, despite a series of controversies. He was accused of lying about his academic studies on his resume and, in 2017, settled a lawsuit with a Canadian couple over alleged spiritual abuse online. That settlement included paying the couple $250,000 and requiring them to sign an NDA.

Shortly after his death, new allegations surfaced that Zacharias had pressured staff at a spa he co-owned for sexual favors. Those allegations eventually led to an outside investigation by an Atlanta law firm, which detailed extensive misconduct by Zacharias. The findings prompted an apology from RZIM’s anonymous board and a pledge from Davis that the ministry would stop doing apologetics and would pivot to giving out grants.

“RZIM cannot — indeed should not — continue to operate as an organization in its present form,” CEO Sarah Davis told staff in a March 2021 email. “Nor do we believe we can merely rename the organization and move forward with ‘business as usual.’ That, we are convinced, is not right for numerous reasons.”

The new Encounter ministry appears to have a similar purpose as RZIM and will do similar work.

“I would describe it as RZIM 2.0,” said Carson Weitnauer, a former RZIM staff member and manager. “There’s been a change of names and a new legal entity, but it’s hard to see how this is different from RZIM simply changing its name.”

Weitnauer worries funds from RZIM will go to the new startup ministry. He is also concerned Davis and other leaders from RZIM have not been completely transparent about the role they played in allowing Zacharias’ misconduct to go on for years. The ministry hired Guidepost Solutions, an international consultant, to review its culture. The status of that review and whether it will ever be made public is unclear. 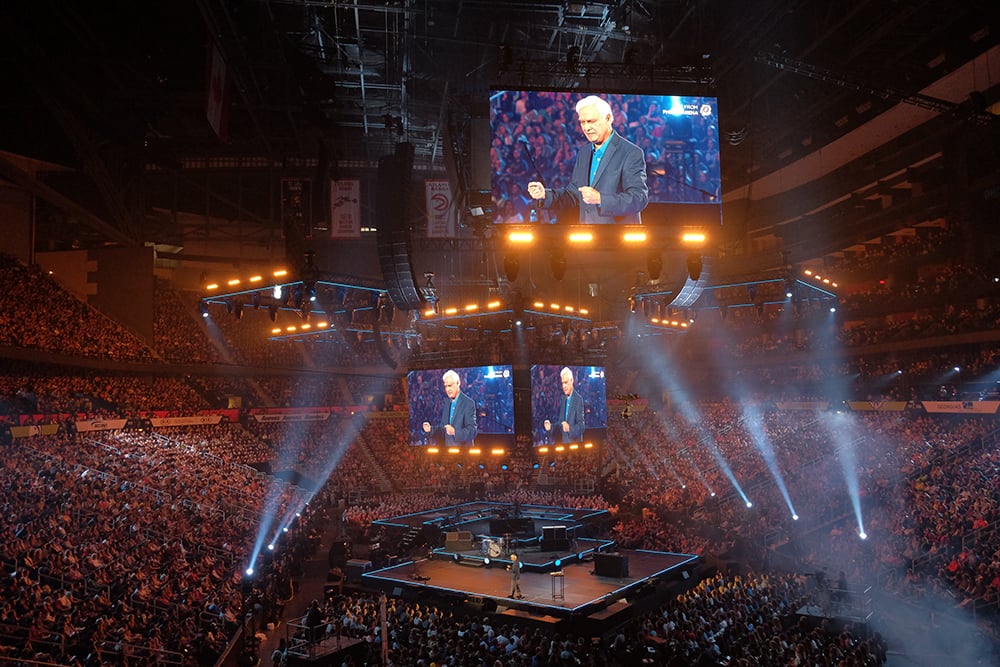 Ravi Zacharias speaks to 40,000 18- to 25-year-olds during the annual Passion conference in Atlanta, in 2016. Photo courtesy of RZIM

Davis apologized earlier this year for making “serious errors” in responding to allegations against her late father. Weitnauer and other former staffers believe RZIM leaders no longer have the credibility needed to be public figures promoting Christian beliefs.

“Repackaging a broken item doesn’t fix it,” said former RZIM spokesperson Ruth Malhotra in an email. “It merely gives the appearance that something is in new and working condition, when in reality the item fails to operate at the required standard — and such a scenario often causes even more damage.”

Former RZIM donors have sued RZIM in federal court, alleging the ministry misled supporters and covered up abuse. The attorney for the plaintiffs said he was aware of the plans for a new ministry.

“Counsel for the proposed bilked-donor class is aware of this development and the questions of propriety animated by it,” attorney Brad R. Sohn, who represents the plaintiffs, told RNS in an email.