And he loves the church.

Both, said Johnson, a former Minnesota Twins pitcher turned pastor, are in trouble.

They’ve lost touch with their past and with ordinary people. They’ve become too much of a show, their leaders too disconnected from their audience, he said. Both religion and baseball see the people in the pews and the fans in the seats as sources of revenue rather than valued partners or supporters. They’ve betrayed the people’s trust, he said, and trust is hard to regain.

He worries about the recent lockout in Major League Baseball, which led to the news that opening day of the 2022 season would be cancelled and concerns that games may not return until May.

“It is hard to take something away and then say, we really care about you and come back,” he said. “And by the way, we are going to charge you more when you get back.”

Johnson also worries about the decline of churches and other forms of organized religion in the United States. He knows younger Americans are looking for something to believe in and want to change the world. But they often find that churches lack a compelling vision that would attract them. 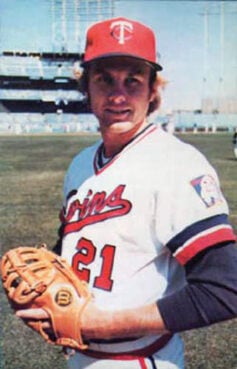 “The church has shot itself in the foot by not adhering to the values that have attracted it to people down through the centuries — that is, caring about the poor and those who are on the margins,” said Johnson, missions pastor at Church of the Open Door in Maple Grove, Minnesota.

Johnson pitched for parts of five seasons in the major leagues in the 1970s before an injury cut his career short, leading to a second career in ministry and as director of GoodSports International, a nonprofit that runs sports camps and youth centers in Slovakia.

Baseball’s feud has also taken a personal toll on Johnson. He is one of about 500 older former players who did not have enough service time to get a pension but get a small stipend in their retirement. Those payments have been cut off during the labor dispute.

RELATED:  Gallup: Fewer than half of Americans belong to a church or other house of worship

Baseball’s cancellation of Opening Day happened the same week leaders of the United Methodist Church announced plans to delay the denomination’s General Convention till 2024 —the third time the meeting has been delayed by COVID-19. That meeting was supposed to resolve a long-running dispute over sexuality in the denomination by allowing more conservative churches to leave.

Instead, any resolution has been put off. Churches may leave without knowing whether they will be able to keep their buildings, and internal feuds will likely continue. All the while, the denomination’s membership is in free-fall. In 1970, the UMC numbered more than 10.5 million. By 2019, there were 6.47 million United Methodists, and the decline shows no sign of stopping.

Fewer than half of Americans in 2021 told Gallup they belong to a house of worship, the lowest percentage since the 1930s. Twenty-nine percent of Americans identify as “Nones” — claiming no religious identity — while only a quarter say they go to church weekly, and less than a third (31%) say they go to services monthly.

What have those groups done in the face of that decline? They have turned inward, fighting amongst themselves over sex, race and doctrine while their churches fall apart.

In 2019, more than 65 million people went to a major league game. In 2021, that number had dropped to 45 million, according to Front Office Sports. Some of the decline in attendance was due to COVID — as the 2021 season started with pandemic restrictions — but attendance at games had already been dropping ever since reaching an all-time high of about 80 million people in 2007, The New York Times reported.

Those declines are driven in part by changes in the game that have made it boring and joyless. Games start late, run long and are filled with tedious at-bats that most often end in strikeouts and walks. When a player hits the ball hard, it’s usually right into a shift, where the defending player is in perfect position to catch the ball, thanks to advanced analytics.

The only saving grace is that once in a while there is a homer, often followed by a manager’s visit to the mound and a change in pitchers, causing more delays.

Rather than work to improve the game and connect with fans, baseball owners locked out the players, and the two sides are now stalemated over how to split billions in revenue. Baseball’s owners and players might want to pay attention to what is happening on the religious landscape before letting their feud go on too long.

Because baseball is more than a business. It is a religion of sorts — a vast social movement that shapes people’s lives, that touches on family, identity, regional loyalty and the joy of being together. It gives us something to talk about and can bring us together when life gets messy.

It’s not just the churches and the clubs that are to blame — both baseball and religion are also victims of changes in American culture, said Bart Barber, pastor of First Baptist Church in Farmersville, Texas, and a longtime baseball fan.

“Baseball as a pastime assumes an America in which people have free time where they can sit down and enjoy a baseball game during the work week,” he said. “The church also assumes that people set aside time — Sunday morning — and when I was growing up, all day Sunday — for church.”

Now, he says, both baseball and religion are competing with a host of other options for the attention of Americans who have a dwindling amount of free time. They can no longer assume people will care or want to be involved.

Scott Thumma, director of the Hartford Institute for Religion Research at Hartford International University, said baseball and organized religion used to live by a saying made famous in the 1989 film “Field of Dreams”: “If you build it, they will come.”

Put up a new church or new baseball stadium and the crowds would follow.

That might have been true in the past, said Thumma, but neither baseball nor churches can expect people to show up on a regular basis. Instead, they have to work hard to connect with their audience and adapt to the changing world around them.

Otherwise, life will pass both baseball and religion by.

Baseball’s owners and players may eventually resolve their differences and get back to work. The same may happen in religious groups. But the damage has already been done.

When the fights are over — whether in church or in baseball — who will be left to care?

News
Department of Justice to investigate Southern Baptist sexual abuse
Follow us on Facebook!
Submit your photos to RNS