(The Conversation) — Ukrainian clergy demonstrating against the war in their country have appeared in media coverage carefully holding an image of the Virgin Mary, her outstretched hands lifting up the edges of a cloak.

These pictures depict a particular religious icon known as the “Pokrova” in which Mary’s veil – a “pokrova,” or “cover,” in Ukrainian – is a sign of protection. 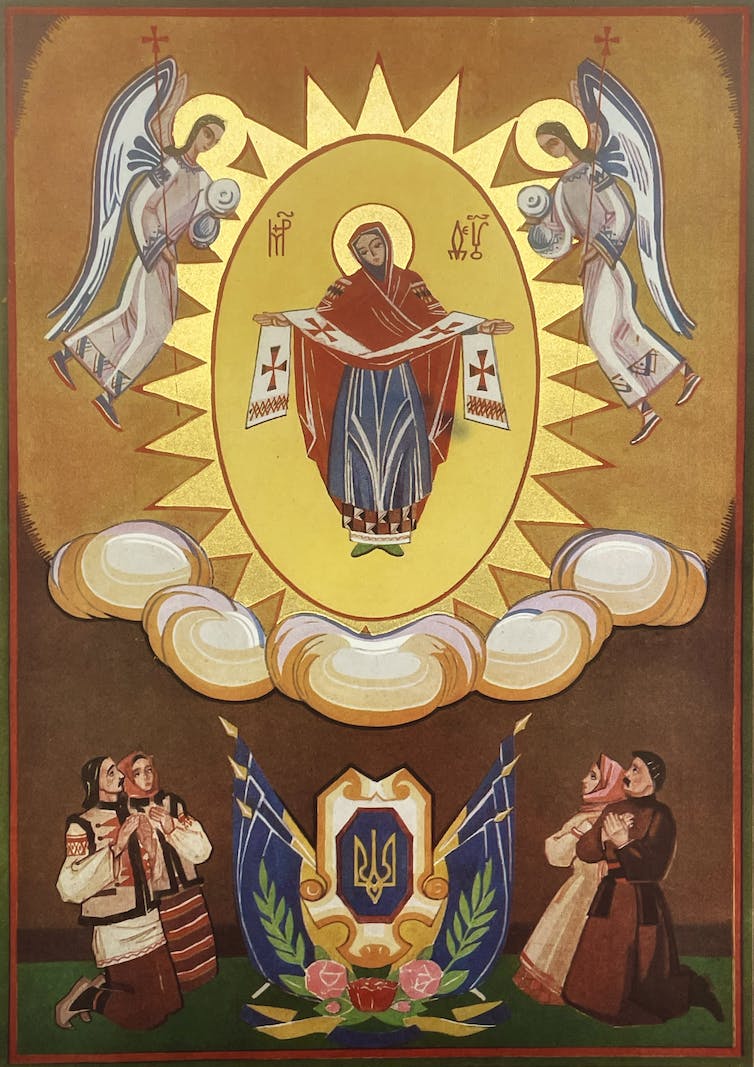 I am an archivist for the Marian Library at the University of Dayton, which includes a collection of Ukrainian artwork about Mary. For Ukrainian Christians, both Orthodox and Catholic, the “Pokrova” image held by protesters represents a long history of seeking Mary’s protection during difficult times.

According to Orthodox tradition, Mary miraculously appeared at a church in Constantinople, or modern-day Istanbul, when the city was under attack in the early 10th century. As the story goes, Mary prayed at the church’s altar, then spread her veil over the congregation, and the invading armies withdrew.

Around a century later, in 1037, Yaroslav the Wise, the Grand Prince of Kyiv, dedicated Ukraine to Mary. To this day Mary is known as “Queen of Ukraine,” among her many other titles, and Oct. 14 is celebrated as the Pokrova, or Feast of the Protection.

There are other icons of Mary that have special meaning to Ukrainian Christians.

One of these is known as the “Oranta” or the Great Panagia. A mosaic of the Oranta is located in St. Sophia Cathedral in Kyiv, built in the 11th century, which is one of the city’s most famous spiritual landmarks. With her arms extended upward, this icon of Mary is also known as the “Immovable Wall” or “Indestructible Wall.” 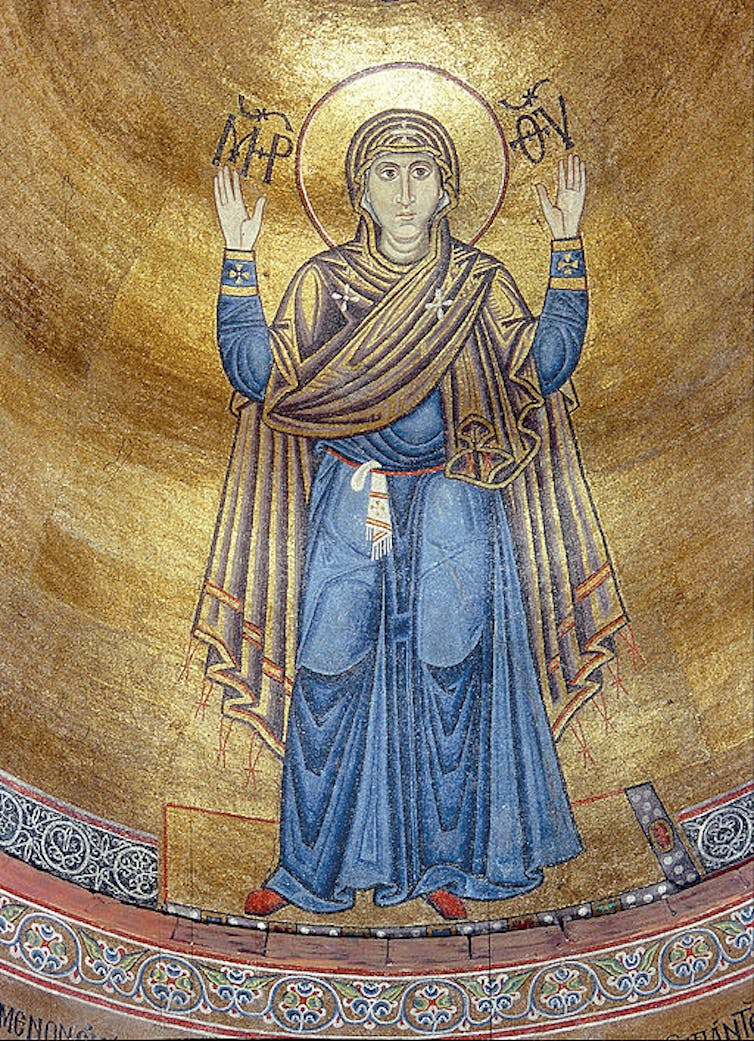 St. Sophia Cathedral has survived centuries of destruction from war and is now a museum. Many Ukrainians in Kyiv believe that as long as the icon stands, Kyiv and Ukraine will continue to stand as well.

The cathedral is one of seven UNESCO world heritage sites in Ukraine, and religious and cultural authorities have voiced concern that it could be at risk during the invasion.

In 1988 Ukrainians across the world celebrated the millennium anniversary of the Baptism of Kyivan Rus. At the time, Ukraine was still part of the Soviet Union, but declared its independence shortly after in 1991.

Icons created of Mary during this era show the importance of freedom and independence. In one of the icons in the Marian Library, for example, by Slovenian artist Mikuláš Klimčák, Mary stands above the entire world while angels hold a banner reading “Freedom.” 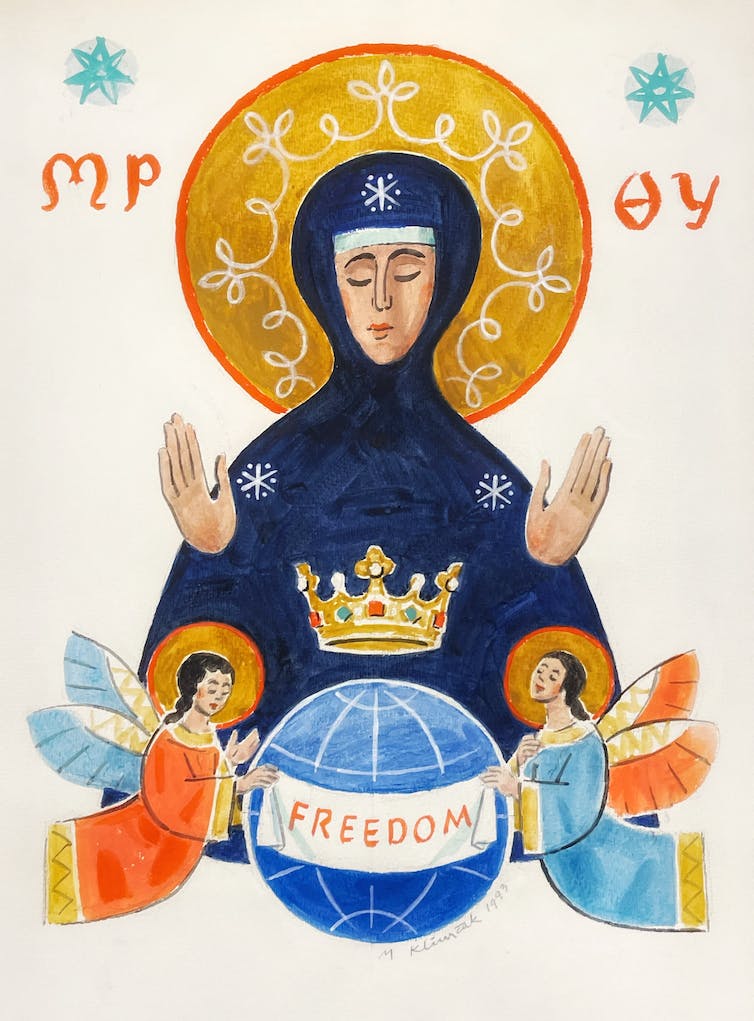 It is quite common for Christians, and even people of other faiths, to ask Mary to intercede on their behalf during hardship.

For the past two years, for example, many across the world have asked Mary to end the COVID-19 pandemic. In March 2020, Pope Francis himself prayed before Salus Populi Romani, a famous Marian icon in Rome’s Basilica of St. Mary Major long associated with requests for healing. In 2020 the Italian Air Force, whose patron saint is Mary, Our Lady of Loreto, took a statue of her by plane across the country to protect citizens from the coronavirus.

Mary is also revered in Islam, and mentioned dozens of times in the Quran, as “Maryam.” In Saudia Arabia, a governor asked people to look toward Mary’s perseverance as an example to find courage at the start of the pandemic.

The mother of Jesus represents strength for many oppressed groups, from Mexican revolutionaries to Polish LGBTQ activists. In 2019, three Polish women were arrested for adding a rainbow to an icon of the Black Madonna of Częstochowa, but later acquitted.

And in recent years, as refugee crises mount around the world, many religious leaders have drawn parallels to the holy family’s flight to Egypt.

Devotion to Mary is one bridge between the Catholic and Orthodox traditions, as well as other faiths. As someone who has experienced human struggles of her own, and even lost her only son, Mary is a source of comfort for many.

(Kayla Harris, Librarian/Archivist at the Marian Library and Associate Professor, University of Dayton. The views expressed in this commentary do not necessarily reflect those of Religion News Service.)

News
Orthodox Christian web forum blocked by Russia over Ukraine coverage
Follow us on Facebook!
Submit your photos to RNS