(RNS) — Christians, Jews and Muslims encounter workplace discrimination, but they experience it differently, according to a new report by Rice University’s Religion and Public Life Program.

While Muslims and Jews say they’ve felt targeted by anti-Islamic and antisemitic rhetoric, it’s most often in the context of being seen as part of a larger group, they said in the study. Whereas evangelical Christians say they more often feel singled out when taking an individual stand based on their moral views, the report found.

Rachel Schneider, one of the report’s authors, said they learned that people often experienced workplace discrimination in the form of microaggressions — such as stereotyping and othering — not just in the hiring, firing and promotion process.

“It was these everyday practices and behaviors in the workplace that was really surprising to learn more about how they’ve manifested,” said Schneider, a postdoctoral research fellow in the Religion and Public Life Program.

The report, “How Religious Discrimination Is Perceived in the Workplace: Expanding the View,” draws its research from Rice University’s “Faith at Work: An Empirical Study,” which included a survey of more than 11,000 people. Additionally, researchers conducted in-depth interviews with nearly 200 of those who were surveyed, including 159 Christians, 13 Jews, 10 Muslims and 12 nonreligious people. The research was funded by the Lilly Endowment.

A large proportion of Muslim (63%) and Jewish (52%) participants reported religious discrimination compared with other religious groups.

Among nonreligious participants, 27% perceived religious discrimination in the workplace. One white Jewish woman working in social services in Indiana detailed co-workers using a common antisemitic trope, saying she was “good at bookkeeping and keeping track of money.” In another example, a white Jewish man who works in information technology in Florida described hearing comments such as “Well, Jews run all the banks.”

An Asian Muslim man who is an engineer in New York mentioned colleagues expressing anti-Muslim views along the lines of “Muslims are extremists,” although he didn’t consider this to be discrimination or directed at him explicitly, according to the report.

In a more extreme example, a white Muslim woman working in sales at a construction company in Louisiana said she was “harassed” when she converted to Islam. She was “ridiculed” after deciding to cover her head and dress more modestly. Signs were put up in the office, with one reading “I tried to see your point of view, but your point of view is stupid.”

Schneider said Muslims and Jewish people didn’t feel they could take advantage of religious accommodations in the workplace, such as access to prayer rooms, because they would have their co-workers “looking at them a certain way.” Researchers found Jewish and Muslim women “concealed or downplayed their religious identity in the workplace to preempt discrimination.”

Muslims and Jews also felt like they were treated as foreign or exotic. “People didn’t really know how to act around them,” Schneider said.

RELATED: Survey: White evangelicals most likely to say they’ve been harassed online for their faith

Christians, particularly those who are evangelical, reported that verbal microaggressions often took the form of specific name-calling.

A white evangelical woman who is a nurse in Tennessee said her co-workers at a previous job “would call me ‘Ms. Holy,’ because some employees … would want to break protocol or break the rules,” she told researchers, adding that she just wanted to follow her employer’s policies. 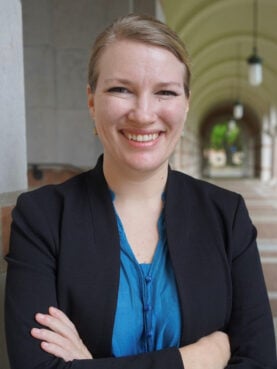 In another example, a Latina evangelical in Tennessee said co-workers at a previous job “would make fun of me because I didn’t talk or participate in their tasteless conversations, saying, ‘Oh, there’s the hallelujah, or the sanctimonious person.'” Also, a Black evangelical man, working as a criminal investigator in Texas, told researchers “there’s kind of this theme out there that Christians are inherently judgmental and hypocritical.”

For Christian women of color, in particular, ”there was this sense that people just made assumptions that they wouldn’t want to be included in social gatherings because they perceived things like ‘they didn’t drink,'” Schneider said. They would be excluded due to “perceived moral lifestyle differences,” she added.

The report’s authors make it clear that Christian perceptions of discrimination don’t “carry the same risk for violence that religious minorities experience.”

“Yet it is important to recognize that Christians do perceive religious discrimination and othering in the workplace in ways that feel demeaning, prejudicial, or exclusionary, and this should not be dismissed by researchers,” the authors said in the report.

As for the nonreligious, respondents felt compelled to downplay or hide their identities.

A nonreligious Latino man working as a security guard in California told researchers he would speak softly when expressing his views due to fear of ”being reprimanded, disciplined, or fired if something was taken out of context.”

A Black agnostic engineer in Arizona said she “was hesitant to reveal her agnosticism because she was already a ‘triple minority’ in the workplace as the youngest employee and a Black woman,” according to the report.

To Schneider, it’s important employers recognize that religious discrimination in the workplace could lead to workers feeling “marginalized and stigmatized” and “may impact their ability to retain employees.”

“We all know employees are often, these days, given diversity training, but in another aspect of our study we asked how often religion came up in those kind of trainings and it was hardly ever,” she said. “If it did, it came up only in a very superficial way.”