(RNS) — While the world’s attention is focused on the fighting in Ukraine, Patriarch Kirill of Moscow has begun challenging the established order of Orthodox Christianity by moving his Russian Orthodox Church into Africa. The Moscow Patriarchate is also dropping heavy hints that his ire will turn to Turkey soon.

According to their traditional rules, the 16 autocephalous, or self-governing, Orthodox churches — some of which are not recognized by others — reign supreme within their own “canonical territory.” Kirill’s bold step into Africa amounted to setting up his own Orthodox Church structure there in parallel to Alexandria’s.

If successful, the new exarchate would woo priests and parishioners away from the Alexandria Patriarchate, weakening the ancient institution and expanding the Russian Church’s sway.

“This is a part of his whole imperial mindset,” said Brandon Gallaher, an Orthodox deacon lecturing at the University of Exeter in Britain. “This type of mentality is now entering places such as Africa.”

Kirill’s moves come in response to what the Moscow Patriarchate calls the Kyiv schism — the recognition of an autocephalous Orthodox Church of Ukraine by the Ecumenical Patriarch Bartholomew I in 2019. Beyond Kirill’s support of Russian President Vladimir Putin’s attempt to subjugate Ukraine as part of “Greater Russia,” Kirill is intent on punishing Orthodox leaders in other countries who backed the breakaway Ukrainian church. Eastern Orthodoxy has only a few hundred thousand followers in Africa, many of them from Greek communities, and is organized under the Patriarchate of Alexandria and All Africa. It is separate from Oriental Orthodoxy, which has 60 million followers, including many in Egypt, Eritrea, Ethiopia and Sudan.

At the end of last year, while the Kremlin was moving toward the Ukraine war, the Moscow Patriarchate announced it was setting up an exarchate — a large church jurisdiction — in Africa. It would be based in Cairo, with dioceses of Northern Africa and Southern Africa, and headed by Metropolitan Leonid of Klin.

Moscow also said 102 Orthodox priests in Africa had already switched from the Alexandria Patriarchate to the Russian exarchate in Africa in protest against Alexandria’s recognition of the autocephalous Ukrainian Church. More were expected to join.

A letter to that effect was signed by 27 African priests — 19 from Tanzania, four from Kenya, three from Uganda and one from Zambia.

“The Patriarch of Alexandria acknowledged the Ukrainian schism,” Metropolitan Hilarion, the “foreign minister” of the Moscow Patriarchate, told RIA Novosti news agency to justify the exarchate decision. “What can be done if a part of the clergy of the Patriarchate of Alexandria refuses to agree with him … and wishes to unite with us?”

The Alexandria Patriarchate claims 2.9 million members, few of them Russians. Traditionally in the Greek tradition, it has grown among Africans thanks to missionary efforts and use of local languages.

The Moscow Patriarchate’s sudden interest in Africa paralleled the Kremlin’s growing interest in the continent, where Chinese economic ties are already strong. “They are in parts of Africa where the Russians are interested in questions concerning their energy interests and in providing military assistance,” Gallaher said.

“They’re competing with the Chinese to throw money at countries,” he added. “People are massively impoverished (and) it appears they have been paying regular salaries in their new exarchate.” 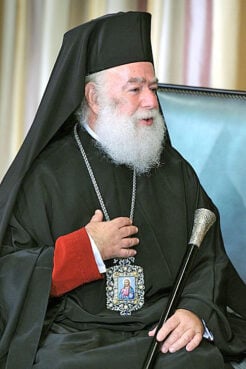 In a letter in early January denouncing Moscow’s move, Alexandria Patriarch Theodoros II called the Russian Orthodox in Africa “false prophets” and “savage wolves that come in among you and will not spare the flock.”

In his interview with RIA Novosti, Metropolitan Hilarion also hinted that the Moscow Patriarchate might set up another exarchate in Turkey, which is officially the territory of the Ecumenical Patriarchate, based in Istanbul.

“In the same way (as in Africa), we cannot deny pastoral care to the Orthodox faithful in Turkey in the situation when the Patriarch of Constantinople has taken the side of the schism,” he said.

That could hurt the Ecumenical Patriarchate, which is centered mostly on the Greek minority of at most 3,000 in Turkey. In recent decades, many Russians have been living in or visiting Turkey both as expatriates and tourists.

To date, the Moscow Patriarchate has not taken any more steps publicly to back up Metropolitan Hilarion’s hint.

RELATED: War in Ukraine may leave millions hungry, warns Eugene Cho of Bread for the World

Like Putin in Ukraine, Kirill might find his expansion plans slowed or blocked by outside factors he didn’t reckon with. The Moscow Patriarchate depends on the Russian state and friendly oligarchs to finance its forays abroad, and Western economic sanctions after the Ukraine invasion could slow or stop the flow of funds from Russia to Africa.

They could also put the brakes on any expansion into Turkey.

“This African adventure may be short-lived,” Gallaher said. “Because of the sanctions, a lot of these African priests have not been getting any money. Some of them are returning to the Patriarchate of Alexandria.”

News
A historic meeting of Orthodox Christian scholars convenes to confront divisions and war
Follow us on Facebook!
Submit your photos to RNS