VATICAN CITY (RNS) — Local organizers of Pope Francis’ upcoming visit to the small Mediterranean island of Malta expect him to bring a welcome to migrants and refugees who have taken refuge there, while urging the citizens of the ancient Christian nation to fight back against the rampant corruption in the country.

Christianity in Malta can be traced back to A.D. 60, when the Apostle Paul was shipwrecked off the island’s coast. His success in converting the locals led the authorities to imprison him for three months in a cave not far from the city of Rabat.

Francis will visit Rabat on Sunday (April 3), the second day of his two-day visit, and make his way to the grotto, where Maltese Catholics believe Paul administered the first Eucharist on the island. Both St. John Paul II and Pope Emeritus Benedict XVI visited this holy site when they came to Malta in 1990 and 2010 respectively.

Given Malta’s proximity to Rome — less than 500 miles as the crow flies — and its history — the island was the longtime base of the powerful lay Order of St. John, commonly known as the Knights of Malta — some are surprised that Francis, who looks to boost Catholics at the margins of the church, would follow his predecessors.

“I find it quite interesting that this visit is happening,” Nadia Delicata, a theologian at the University of Malta and a local organizer for the pope’s visit, told reporters at the Vatican last week. “Malta isn’t exactly the place that I consider to be the peripheries of Catholicism,” she added, using the pope’s phrase for those outside the church’s power centers.

But Malta is an apt site for Francis to address two issues he has made central to his papacy: welcoming people displaced from their countries by war or famine, and the effects of government corruption on the poor.

Malta ranks 54th of 100 on Transparency International’s Corruption Perceptions Index. Joseph Muscat, who served as prime minister of Malta from 2013 to 2020, has been embroiled in scandal since the release of the Panama Papers in 2016, leaked documents that unveiled Maltese officials’ alleged cooperation, among many others’, in money laundering schemes perpetrated by the world’s wealthiest.

“Corruption is a reality that is poisoning Maltese society,” said the Rev. Marc André Camilleri, a parish priest at the basilica of Christ King in Malta, speaking to Vatican reporters online last week.

When Francis meets with political and religious representatives on Saturday, he is expected to bring a message of transparency and ethics in public life. “Let’s hope he makes it clear that corruption is unacceptable in a civil society,” Camilleri said.

On Sunday, after paying homage at Paul’s grotto, Francis will tour the John XXIII Peace Lab, a center where migrants and refugees, mostly Africans, are offered asylum and integration services. 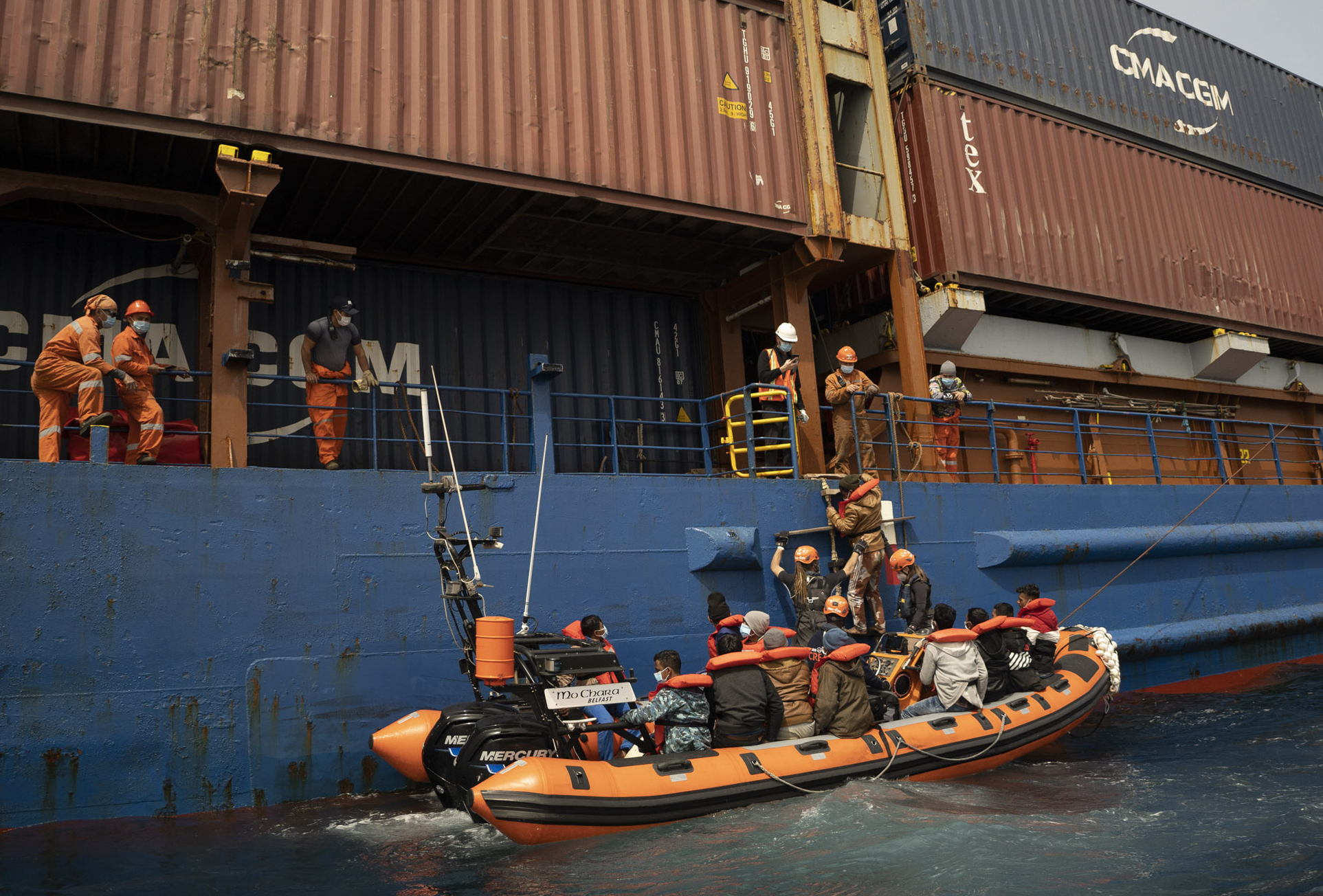 In this picture made available March 30, 2022, by Sea-Eye, rescued migrants are transferred on a Sea-Eye 4 humanitarian ship dinghy from the German merchant vessel Karina in the central Mediterranean Sea, March 29, 2022. (Joe Rabe/Sea-Eye via AP)

Paul’s experience in the perilous Mediterranean waters presaged the challenges faced by many migrants from the Middle East and Africa sailing much the same route today, and the pope will likely draw a parallel between the presence of today’s migrants and refugees and Paul’s conversion of Malta.

The episodes described in the Acts of the Apostles reflect the Maltese characteristic of being “kind, generous and welcoming people,” said Sara Zingariello, coordinator for migrant outreach at the Maltese branch of the Catholic charity Jesuit Refugee Services, speaking to Religion News Service on Friday.

The pope’s visit “is an opportunity for us to rediscover perhaps this beautiful characteristic in a world and in a society that is increasingly becoming more defensive and closed as a result of fear and concern about the future,” she added.

Representatives from Jesuit Refugee Services will be present at the pope’s meeting with migrants on Sunday. “Pope Francis’ focus on human dignity that goes beyond nationality, race and religion makes his message very universal,” Zingariello said. “It’s a message that everyone — migrant or Maltese — can really identify with.”

According to Delicata, migration flows are also causing the Maltese church “to change its face” to accommodate the Filipino, Colombian and Syro-Malabar traditions of the island’s new arrivals.

Francis was originally scheduled to visit Malta in 2019 at the Feast of Pentecost, a Christian symbol of rebirth. The current visit, coming shortly before Easter, is also intended to signal the pope’s hope to revive the church in Malta, according to Delicata.

Modern-day Maltese have embraced the secularism that is common across Europe. Malta was among the first states in Europe to legalize same-sex marriage and decriminalize recreational drugs, but the island also has one of the strictest anti-abortion laws in the world.

Only 37% of Maltese attend Mass regularly, according to a 2017 census published by the Times of Malta — though many more attend monthly.

There is a sense that Maltese Catholicism’s vitality is as antiquated as the Knights Hospitaller, whose grand master once wielded tremendous influence not only on the island but in Rome, where the group is now based. In 2017, Francis contested the Knights’ authority at the Vatican in a move seemingly meant to quell conservative dissent. The current archbishop of Malta, Archbishop Charles Scicluna, is currently one of the pope’s right-hand men in reforming the church.

On Saturday, Francis will go to the Sanctuary of Ta’Pinu on the island of Gozo, just off the Maltese coast, to say Mass for a crowd of 3,000 and local bishops, giving the pope the chance to encourage the local church to go back to its faithful roots.

RELATED: Monsignor accused in Vatican financial trial says he ‘only obeyed’ bishops above him

The church in Malta, accustomed to being close to power inside the Vatican, must now find its new identity in charitable work and evangelization, Delicata said.

“The Maltese version of being Catholics is that it’s a family matter, a traditional matter, but it doesn’t necessarily translate to having a social conscience,” she said, adding that “the pope might be telling us not just to repent, but also to be courageous.”