VALLETTA, Malta (RNS) — “Honesty, justice, a sense of duty and transparency are the essential pillars of a mature civil society,” Pope Francis told officials of this tiny Mediterranean island nation shortly after arriving Saturday (April 2), putting a spotlight on the country’s recent battle against government corruption.

“May your commitment to eliminate illegality and corruption be strong, like the north wind that sweeps the coasts of this country,” Francis said in an address to representatives of the Maltese government and diplomatic corps. “May you always cultivate legality and transparency, which will enable the eradication of corruption and criminality, neither of which acts openly and in broad daylight.”

The pope began his visit to Malta this weekend with a message of welcome to migrants and a plea to end the war in Ukraine and to overcome divisions in a spirit of dialogue and inclusion. He later paid a visit to the Ta’ Pinu National Shrine in Gharb, on the nearby island of Gozo.

In his speech to local authorities, Francis obliquely criticized the Maltese government’s efforts to limit migrant flows on the island, an important stopping point for immigrants trying to reach Europe. Recent investigations by The New York Times and the Italian bishops’ magazine Avvenire shed light on Maltese efforts to ferry migrants back to their countries of origin despite the dangers they faced and against European Union regulations.

“Civilized countries cannot approve, out of their own interest, sordid agreements with criminals who enslave other human beings,” Francis said, urging European countries to come together “to become a new theatre of solidarity and not the harbinger of a tragic shipwreck of civilization.”

Corruption has haunted Malta since former Prime Minister Joseph Muscat was forced to retire after a judge said he shared indirect blame for the 2017 murder of investigative journalist Daphne Caruana Galizia, who was reporting on money laundering schemes of the rich and powerful brought to the fore by the leaked Panama Papers. 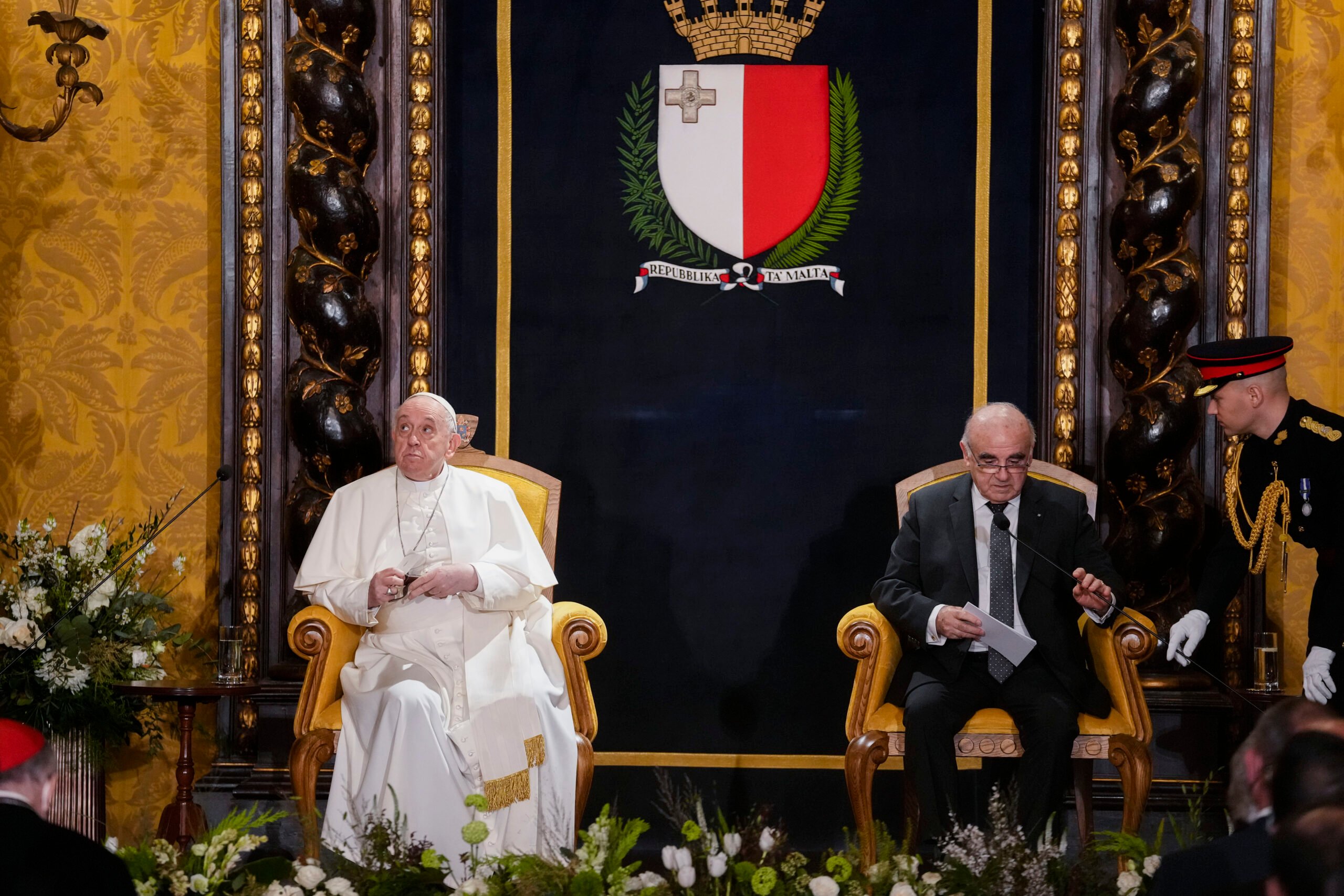 The pope made no mention of the identities of the perpetrators, but according to Corinne Vella, Caruana Galizia’s sister, his speech addressed the key concerns of “legality, justice and the importance of shining light in dark corners.”

“I feel that that is implicit recognition of Daphne’s work and ultimate sacrifice,” she said.

After their sister’s death, Vella and her siblings founded the Daphne Caruana Galizia Foundation, which provides a platform for journalists hoping to continue Caruana Galizia’s work. Vella said that the Catholic Church in Malta — and especially the country’s archbishop, Charles Scicluna — has been a dependable voice against corruption and for justice.

A week after Caruana Galizia died in an October 2017 car bombing, Scicluna celebrated her funeral service, telling her killers: “However hard you try to evade the justice of men, you will never escape from the justice of God. Repent before it is too late.”

Alessandra Dee Crespo, a chancellor of a Catholic legal tribunal who works closely with Scicluna, also attended Caruana Galizia’s funeral and told RNS in an interview on Friday that she remembers thinking, “I promise I will do something about this. I don’t know what it is, but it’s a promise.”

Caruana Galizia’s death, Dee Crespo said, spurred Maltese citizens to protest in the streets of Valletta and leave flowers in honor of her commitment to the pursuit of truth at the Great Siege monument marking Maltese resistance to invasion. Every morning, Dee Crespo said, Muscat’s government would have the flowers removed.

With the archbishop’s consent, Dee Crespo became vice-president of a network of activists committed to fighting corruption, called Republika, who sported T-shirts printed with the last words Caruana Galizia wrote on her popular blog: “There are crooks everywhere you go now, the situation is desperate.”

Dee Crespo said that “corruption is still rife” on the island and that many recommendations made in a 2021 report resulting from a public inquiry went unheeded.

The Vatican has not been untainted in its own dealings in Malta. Last month, Maltese courts rejected a request for an injunction from the Vatican bank in a case involving the bank’s 2013 investment in the purchase of Budapest’s former stock exchange building in Hungary.

The Vatican bank claimed in court documents that in a “menacing web of intrigue and suspicious transactions” it was defrauded out of millions.

The Budapest deal has drawn comparisons to the controversial purchase in 2014 of high-end real estate in London by the Vatican secretariat of state, which is currently at the heart of a Vatican financial trial against 10 individuals, including Cardinal Angelo Becciu, formerly the Vatican’s third-highest ranking official.

But Vella said she admired the church and the pope’s “devotion to speaking the truth, however uncomfortable for his listeners, and for drawing attention to the plight of migrants when others would prefer them to be forgotten,” she said.

RELATED: Young Black Catholics are still here and flourishing more than their peers