VATICAN CITY (RNS) — For the first time since the start of the COVID-19 pandemic, more than 10,000 onlookers filled the Colosseum in Rome on Friday (April 15) for the Via Crucis, the traditional pageant commemorating the 14 “stations,” or key moments, of Christ’s crucifixion, as Pope Francis presided.

Francis used the passion play to showcase his vision for reconciliation and forgiveness in a Holy Week tarnished by war in Ukraine. This vision included his decision to ask two women, one from Russia and one from Ukraine, to carry the cross to the 13th station, in which Jesus dies, which was met with skepticism by even some church leaders.

Francis didn’t back down, but when it came time  for the two to read the reflection they, like the other participants, had written for their part of the ceremony, there was a moment of silence for Ukraine instead.

The two women, Irina, a Ukrainian nurse, and Albina, a Russian student, told Vatican media that, though they were already friends, “this war made us even closer.”

For the most part the other scenes of Jesus’ path to execution focused on the family and the plight of migrants, but the collective grief over the war was a recurring theme of Friday’s ceremonies.

The pope recited a prayer to conclude the ceremony, asking God to “turn our rebellious hearts to your own heart, so that we may learn to pursue plans of peace, inspire adversaries to shake hands and taste mutual forgiveness. Disarm the hand of brother raised against brother, so that where there is hatred, concord may flourish.” 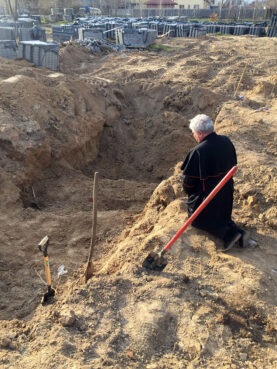 Cardinal Konrad Krajewski, the papal almoner, prays recently next to a mass grave in Ukraine. Photo by Vatican Media

Earlier, Cardinal Konrad Krajewski, a top Vatican official, celebrated the Via Crucis amid the rubble in Kyiv. The cardinal, “out of tears and out of words,” prayed at mass graves near Borodyanka, north of Kyiv.

“Fortunately there is faith and we are in Holy Week, Holy Friday, when we can join in the person of Jesus and go with him on the cross, because after Holy Friday … there will be the Sunday of Resurrection,” Krajewski said, according to a statement released Friday.

“Maybe he will explain everything with his love and everything will also change within us, this bitterness and this suffering that we have been carrying for some days, but especially today,” the cardinal added.

Krajewski brought with him an ambulance as a gift from the pope to the city’s hospital. He will stay for another week in Ukraine as a sign of solidarity with the country’s Orthodox Christians, who celebrate Easter on April 24.

RELATED: For rabbis visiting the border with Ukraine, Passover has a whole new meaning

In an interview with Rai1, the Italian public broadcaster, on Friday, Francis lamented that, despite diplomatic efforts, the world has not been able to escape “this diabolic pattern of killing one another out of the desire for power, the desire for security, the desire for many things.”

Asked how to dialogue with those “who pursue only the imposition of power,” the pope underlined the need for persistence.

“With those people who are sick, who have this disease of hatred, you speak, you dialogue,” the pope said, adding that Jesus even looked at Judas, the apostle who betrayed him, with tenderness. “But we must never give up on a person, no … who’s ended up doing evil, and say, ‘This person is condemned.’”

Francis issued a warm message “as a brother in faith” to Orthodox bishops as they prepared for Easter in a time of conflict. With his accustomed emphasis on mercy, the pope offered “his prescription” for forgiveness: remembering that humans are only kept from committing evil acts themselves by God.

“If I have not done that evil, it is because he has stayed me with his hand, with his mercy. Otherwise, I am sure I would have done so many (things) like the others, so much evil,” he said.

He ended, “This is why I cannot condemn someone who comes to ask for forgiveness.”

RELATED: What I learned at the Ukraine-Poland border