CSU’s move has drawn a sharp response from some in the Indian diaspora: About 80 faculty members of Indian heritage, as well as the Hindu American Foundation, a Washington, D.C.-based advocacy group, have opposed the decision, claiming that it is potentially stigmatizing for persons of Hindu or Indian heritage. They have also threatened a lawsuit against CSU if this decision is not revoked.

While the caste system originated in Hindu scriptures, it crystallized during British colonial rule and has stratified society in every South Asian religious community. In addition to India, it is present in Pakistan, Bangladesh, Nepal, Sri Lanka, the Maldives and Bhutan.

Social, economic and political status in this pernicious system is tied to traditional occupations fixed by birth. Brahmins, for example, who are assigned priestly work, are at the top, and Dalits, relegated to the bottom, are forced into occupations that are considered abject in South Asia, such as cleaning streets and toilets, or working in the tanning industry. Caste-based rules of marriage maintain these boundaries firmly.

Caste organizes social life not only among Hindus but also in Muslim, Christian, Sikh and Buddhist communities in the region. It is an intergenerational system based on birth into a caste group. Caste identities stay even generations after someone converts out of Hinduism and into any of these faiths.

Among South Asian Christians, Anglo-Indians are at the top of the hierarchy. This small community includes individuals of mixed descent from Indian and British parents. Those who converted to Christianity, even generations ago, from middle level Hindu castes come next, followed by those from Indigenous backgrounds. Those who converted to Christianity from Dalit castes are placed at the bottom.

Muslims across the region are organized with the minority Ashraf communities at the top. The Ashraf community claims noble status as the “original” Muslims in South Asia, due to their descent from Central Asian, Iranian and Arab ethnic groups. The middle in this social hierarchy is comprised of Ajlaf, considered to be “low-born” communities that converted from Hindu artisanal castes. The group at the bottom includes converts from Dalit communities who are identified with the demeaning term Arzal, which means vile or vulgar.

In the Sikh community, the powerful land-owning caste, Jat-Sikhs, are at the top, followed by converts from Hindu trading communities in the middle and converts from lower caste Hindu communities, Mazhabi Sikhs, at the bottom. 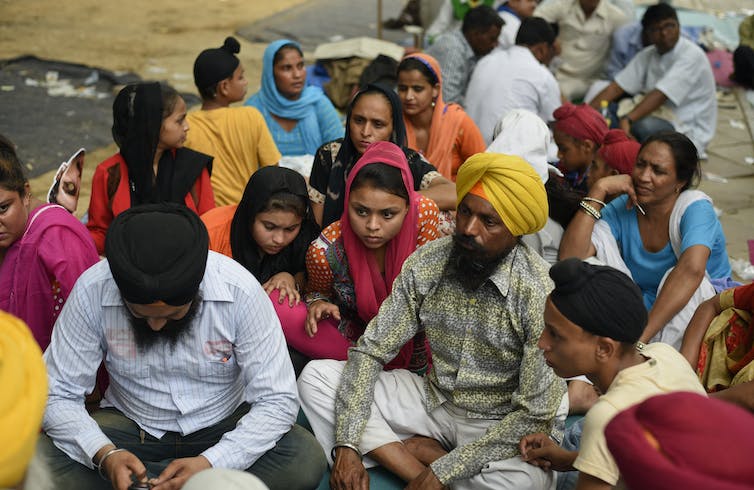 While Buddhism in India is close to being casteless, its dominant versions in Sri Lanka and Nepal have caste-based hierarchies.

Caste carries over after conversion

While many of the so-called lower caste groups converted to escape their persecution in Hinduism, their new religions did not treat them as fully equal.

South Asian Christians, Muslims, Sikhs and Buddhists with Dalit family histories continue to face prejudice from their new co-religionists. They are excluded from or experience segregation at shared places of worship and sites of burial or cremation across all these regions.

Social scientists have shown that strict caste-based rules continue to regulate social organization and everyday interactions. Intercaste marriages are rare: In India alone, they have remained at about 5% of all marriages over the past several decades. When they take place, the couples risk violence.

While urbanization and education have normalized everyday interactions across caste groups in shared urban spaces, entertaining lower caste individuals in upper caste households is still taboo in many families. A 2014 survey found one in every four Indians to be practicing untouchability, a dehumanizing practice in which people from Dalit castes are not to be touched or allowed to come in contact with upper caste individuals. Untouchability was prohibited in India in 1950 when its egalitarian constitution came into force. However, home ownership is segregated by caste, and religion and caste discrimination is pervasive in the rental market where residential associations use flimsy procedural excuses for keeping lower caste individuals out.

Lower castes are expected to defer to the higher status of upper castes, refrain from expressing themselves in shared spaces and avoid displaying material affluence. They risk being punished by socioeconomic boycotts, which could include ostracizing the Dalits or keeping them out of employment. It may even include assault or murder. In Pakistan, anti-blasphemy laws are used as a pretext for caste violence against Dalits, many of whom have converted to Christianity.

Studies show that caste-based identity is a major determinant of overall success in South Asia. Upper caste individuals have better literacy and greater representation in higher education. They are wealthier and dominate private sector employment, as well as entrepreneurship.

While affirmative action programs initiated by the British and continued in independent India have made improvements in the educational levels of lower caste groups, employment opportunities for them have been limited.

Most socioeconomic elites in South Asia, regardless of religion, are affiliated with upper caste groups, and the vast majority of the poor come from lower caste groups.

Caste in the diaspora

Scholars have documented similar discriminatory practices in the diaspora in the U.K., Australia, Canada and the African continent.

Caste has started getting recognition as a discriminatory category, especially in the U.S., in recent years. A 2016 survey, “Caste in the USA”, the first formal documentation of caste discrimination within the U.S. diaspora, found that caste discrimination was pervasive across workplaces, educational institutions, places of worship and even in romantic partnerships.

In 2020, the state of California sued Cisco Systems, a technology company in the Silicon Valley, on a complaint against caste-based discrimination. Harvard University, Colby College, UC Davis and Brandeis University have recognized caste as a protected status and have included it in their nondiscrimination policies.

These developments in the U.S. have put the spotlight again on this centuries-old system that denies equality to large populations on the basis of an oppressive and rigid hierarchical system. It is up to the American diaspora how they commit to engage with it, as they themselves strive for equality and fairness in their new multicultural society.